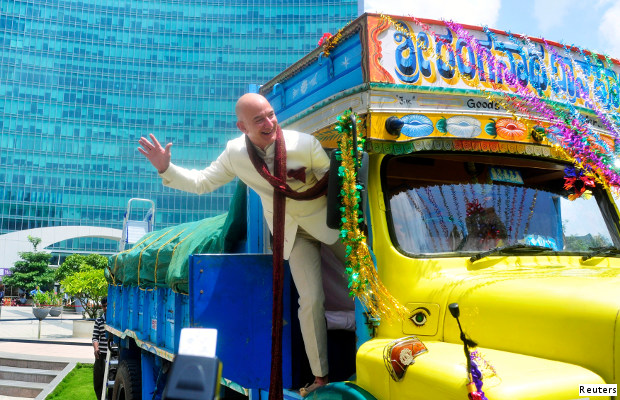 Jeff Bezos, founder and CEO of global e-commerce giant Amazon, outside a shopping mall in Bangalore on September 28, 2014.

India’s e-commerce market is intensely competitive, with US giant Amazon establishing its presence in India in 2013 and Alibaba, the Chinese giant, planning to start selling by August this year. Flipkart, India’s largest e-commerce firm, recently raised $550 million (Rs 3,300 crore) at a valuation of $15 billion (Rs 90,000 crore).

Despite having the third-largest internet user base in the world with 200 million users at the end of 2014, India does not feature in the top ten e-commerce markets in the world, according to an eMarketer report. The reasons centre on low Internet reach, slow internet speeds outside the metropolitan cities and poor customer services.

“If you look at Japan, China and US, e-commerce became popular as early as 2002-2003. It has taken them about 12-13 years to reach where they have reached. E-commerce really took off in India only in 2012-13. It will take India also that much time to reach there,” Rajnish (he uses only one name), a technology expert, said.

China: Number 1 in e-commerce with skyrocketing growth ahead

China and the US accounted for more than 55% of global internet retail sales in 2014. China’s growth over the next five years will widen the gap between the two countries.

The UK leads the world with 88% penetration. Ironically, China with 55.2% and US with 74.4% penetration do not feature in the top five.

Indian e-commerce has a long way to go

“E-commerce in India still has a lot of friction,” Rajnish said. “Till that is solved, it will be hard for penetration to go beyond 30%. For example, India has very low credit-card penetration and the cash-on-delivery (COD) model is why Flipkart really took off.”

People above 35 are not very comfortable using their debit card online. PayTm and others solve this problem but there is a lot of friction. “I use PayTm for Uber and it is still a process that has friction. ?In US, the return policy is very generous. I bought a coat from Amazon in the Bay area; it ended up being the wrong size. My experience of changing to the correct size was very seamless. When I bought a down jacket in Bangalore, and it ended up being the wrong size, getting the right size was really a painful experience,” said Rajnish.

That view is echoed by Paritosh Sharma, an advisor to tech startups and Head of Long tail and Partner business growth with PayUMoney, a digital-payment platform.

“Digital buying has an attached expectation to it. I place the order and it should appear in front of me over the next two or three days. In many cases this does not happen. Also, in a lot of cases (especially in tier-2 and tier-3 cities) in India, if you get a product that is not of the exact quality that you ordered, returning it is a major problem. Most people, hence, prefer what's available in a physical retail store,” Sharma said.

First, the internet infrastructure in India is poor. If one steps outside city limits, you automatically are shifted from 3G to an Edge (a lower-speed) connection, deterring buyers.

Second, lack of good service and support. While most Indian e-commerce companies are sprucing up their support via phone and digital media, it’s quite haphazard. Most companies still lack processes to ensure customer satisfaction and trust.

2) Digital buyers are internet users (ages 14+) who have made at least one purchase, including mobile, online and tablet purchases during the calendar year.