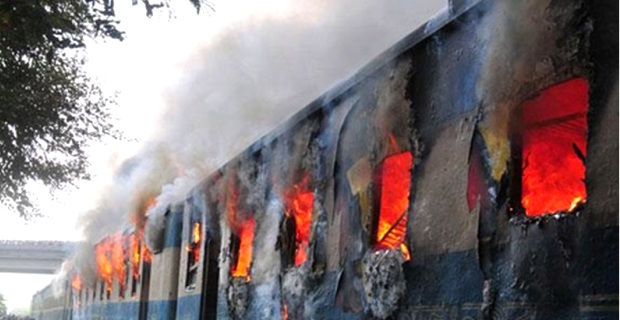 A communal flare-up (clashes between communities) occurred in Kishtwar district in Jammu and Kashmir around the Eid festival on August 9, 2013.

There were four casualties and around 80 people were injured. Kishtwar town continues to be under curfew at the time of writing this report, which the Government is easing, but intermittently.

The Kishtwar incident triggered a hailstorm of media coverage and political heave-ho. So much so that Omar Abdullah, J&K’s Chief Minister complained in a public function last week that J&K got attention for communal incidents while such incidents also occur elsewhere in the country.

This is not to defend the state of J&K or its young Chief Minister. But the fact is he is right. IndiaSpend used his plea to examine the overall numbers for such incidents (or riots though we are using the term descriptively) across the country. And came up with some disturbing findings.

Sample this. In the last four years, there have been 61 communal incidents or riots, 9 deaths/killings and 192 injuries every month, on an average.

IndiaSpend looked at this data sourced from questions raised in Parliament (as opposed to individual states) and found that from 2009 to 2013 (up to March), there have been 2,969 incidents of communal riots in the country where 9,228 people have been injured and 442 were killed. It is possible the data could vary if there are differences in the interpretation of communal incident or riot in specific states.

The data IndiaSpend looked at does not throw light on the causes behind the deaths, for instance, whether it was due to police firing or the clashes themselves.

Bihar, which recently witnessed communal tension, had 137 incidents between 2009 and 2013 with 19 killings. Incidentally, Jammu and Kashmir had only 2 incidents of communal tensions with no injuries or killings in this period. 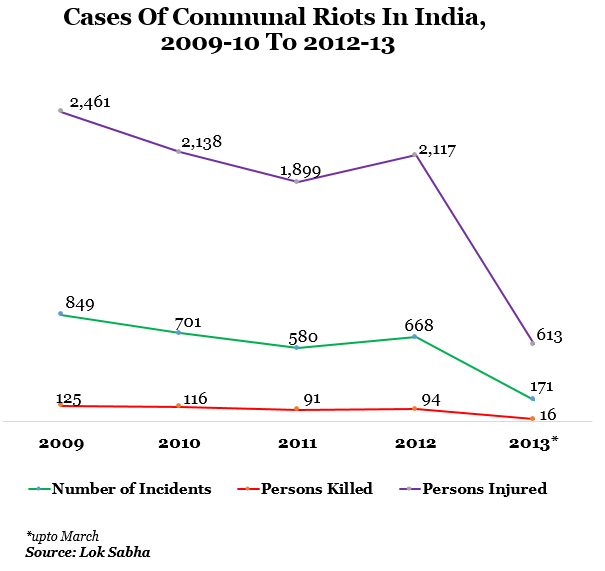 The number of communal clashes declined from 2009 till 2011 but escalated again in 2012. The same is true for the number of people injured and killed due to riots. The trend shows that the number of incidents is reducing again this year.

The table below lists the top 10 states with the highest number of communal clashes between 2009 and 2013. 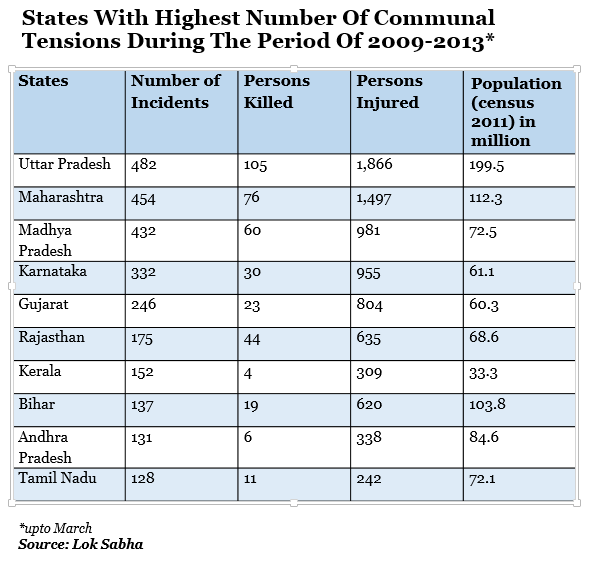 U.P. leads the rankings with 482 incidents and 105 killings followed by Maharashtra with 454 incidents and 76 deaths. Gujarat, which witnessed one of the biggest riots in recent history, finds a place in the top 5 states with 246 incidents 23 persons killed and 804 injuries. Rajasthan, with 175 incidents and 44 killings had lesser communal clashes than these states.

Interestingly, Goa and Jammu and Kashmir are the states with the lowest number of communal clashes with only 7 and 2 incidents reported with no casualties reported. The North-Eastern states, except Assam, have reported zero incidences. Assam reported 39 clashes in four years.

To return to J&K, Chief Minister Abdullah had said that during the last four years he had been in power, the Kishtwar incident was the first of its nature. Our viewing of the data seems to suggest he was right.