India’s Curse Of Being Educated 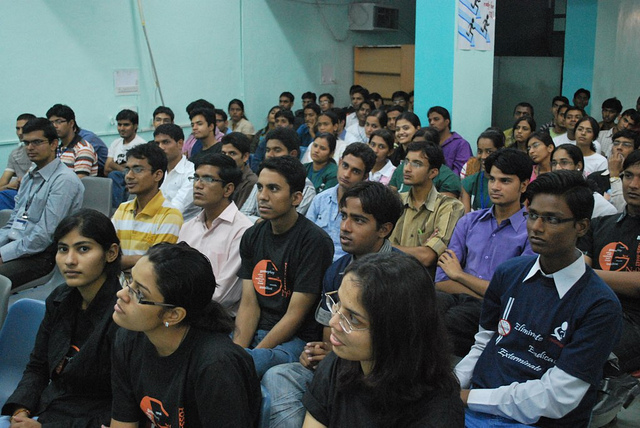 If you think India is at an advantage thanks to a population of 430 million young people, it’s time to think again. The fact is some 18% of 15-24 year olds are unemployed in the country. Moreover, over 32% of graduates and above are still looking for jobs. As a matter of fact, the less educated you are, the better a chance you have at getting a job.

The International Labour Organisation (ILO), in its recent report, has highlighted how the youth job crisis has been aggravated thanks to a weakening of the global recovery in 2012 and 2013.

The graph below shows the trend in ILO estimates of global youth unemployment. This refers to people aged 15-24yrs. The global youth unemployment rate, estimated at 12.6% in 2013, is close to the 2009 crisis peak of 12.7%. As many as 73 million young people are estimated to be unemployed in 2013 worldwide. On an average, a young person is three times likely to be unemployed when compared to an adult! 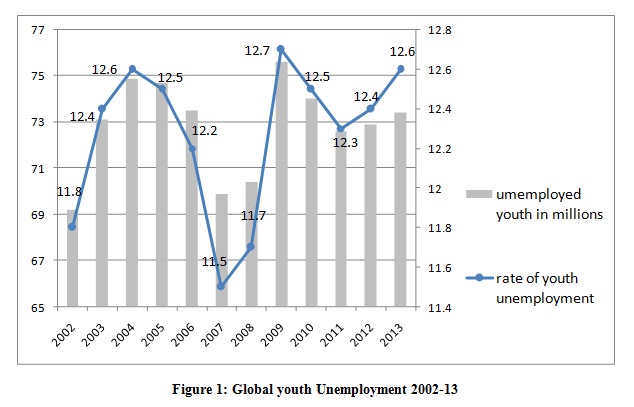 ILO has urged its member-countries to proactively heed the crisis, and address issues like skills mismatch, persistence of over-education and under-education, under-skilling and skills obsolescence due to long unemployment spells.

A similar story is playing out in India as well. The population in the age-group of 15-24 increased from 190 million in 2001 to 231.9 million in 2011. And a recent report by the Labour Bureau on youth employment and unemployment (2012-13) says the rapid increase in the young labour force has not been backed by an equal growth in the job market.

There is no unique definition of specific age group which refers to youth in the country and neither does unemployed refers to those either in the job market or involved in education. The youth unemployment rate for 18-29 year olds is as high as 13.3%. It can be clearly seen how hostile the job market is for the young. And interestingly, the unemployment rate for people above 30 is only 1 percent!

We have used the ‘usual principal status’ approach i.e. the major time spent by a person (183 days or more out of 365 a year) is used to determine whether the person is in the labour force or out of the labour force. A person found unemployed under this approach reflects chronic unemployment. (We have considered the age-group 18-29 for further analysis because of the minimum legal age of employment being 18 yrs.)

The distribution of the employed youth by the type of work in rural and urban areas shows that the majority are either self-employed or casual workers.

We have used the ‘usual principal status’ approach i.e. the major time spent by a person (183 days or more out of 365 a year) is used to determine whether the person is in the labour force or out of the labour force. A person found unemployed under this approach reflects chronic unemployment.

The distribution of the employed youth by the type of work in rural and urban areas shows that the majority are either self-employed or casual workers.

The report states the following reasons for increase in youth unemployment in India.

Clustering of the new opportunities around the top end in the professional and advanced technical sectors and secondly at the bottom end in low-tier service industry.

Decline in skilled jobs in manufacturing sector together with increase in demand for professional specialists and unskilled jobs in secondary and tertiary sectors has led to a situation where a large segment of youth either do not possess requisite skills and experience for new opportunities or are employed on part time or temporary contract basis. This casualisation of job has pushed young people to informal sector largely.

Mushrooming of large number of unregulated private institutions conferring technical degrees and diplomas unsuited to the job demands of the modern economy.

In short, the widening of skills mismatch is compelling the young to find easier way out by resorting to self-employment. The Labour Bureau’s 2012-13 report states some interesting facts:

* Every 1 person out of 3 holding a degree in graduation and above is found to be unemployed.

*For graduates & above, the unemployment rate is significantly high at 32%

* Uneducated are better employed than them; and

* Unemployment rate is increasing with the increase in education level

Sector-wise, Indian youth contributes most to ‘agriculture, forestry and fishing’ sector. The following chart shows the sector-wise distribution of the employed youth. Labor force employed in ‘trading, repair of motor vehicles, transportation & storage, accommodation and food service activities’ (which don’t require much expertise), is greater than that involved in ‘Construction’ and ‘Manufacturing’. 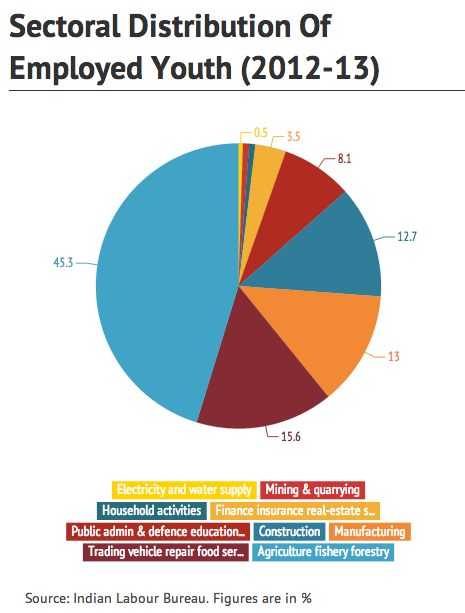 The National Youth Policy launched by the UPA Government in January recommends increase in investment in youth programmes targeted towards education, skilling, entrepreneurship and Dhealth care. The ‘demographic dividend’ can be harnessed only with comparable growth rates of the economy. IndiaSpend’s own studies have shown a high correlation between youth voting trends and regions where economic growth is lagging. The present NDA Government has its work cut out for it. And high expectations to match.