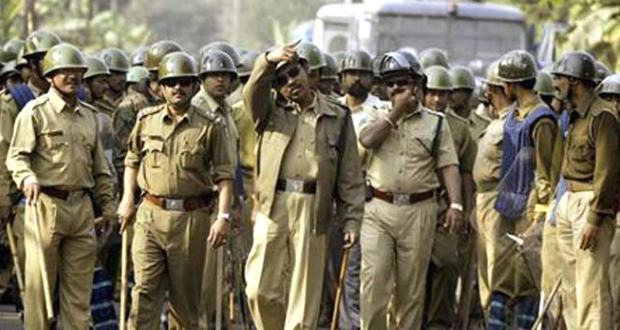 The task of fixing corruption in India can often seem like plugging the proverbial hole in the bucket. Frustration levels usually rise because there is no clear idea on where to begin. The framers of policy know this but it might be useful for us to also see, with relative scientific absoluteness, where the problem lies and where the fixing of the leaky bucket could begin.

The answer in general is public services, more recently described as retail corruption. And more specifically, in the following areas; the police, followed by registry, permit services land services. So, obvious as all types are, even if the first is tough, then it might not be a bad idea to attack the last, with some ferocity.

In a recent survey by Transparency International, a Berlin-based non-governmental organisation that monitors and publicizes corporate and political corruption in international development, almost 71% Indians felt corruption had increased in 2012-13, which was 3% less when compared to 2010-11. This could be interpreted as improvements in the attitudes pertain to corruption.

On other counts, the report- Global Corruption Barometer 2013– a telephonic survey conducted of 114,000 people across 107 countries, presents a very grim picture for India.

68% people think that anti-corruption policies (The Right to Information Act and the Lokpal Bill) are ineffective, which is an increase from 44% in 2010-11. However, the number of people who are indifferent about these policies has come down from 31% to 23%, which means more people are taking the issue of corruption seriously.

According to the report, the global scenario on corruption is equally grim: One-in-four people agreed to pay a bribe while dealing with public services while this number was 5.4 for every 10 people (or 54%) in India.

The following table shows the comparative perception of corrupt institutions within India: 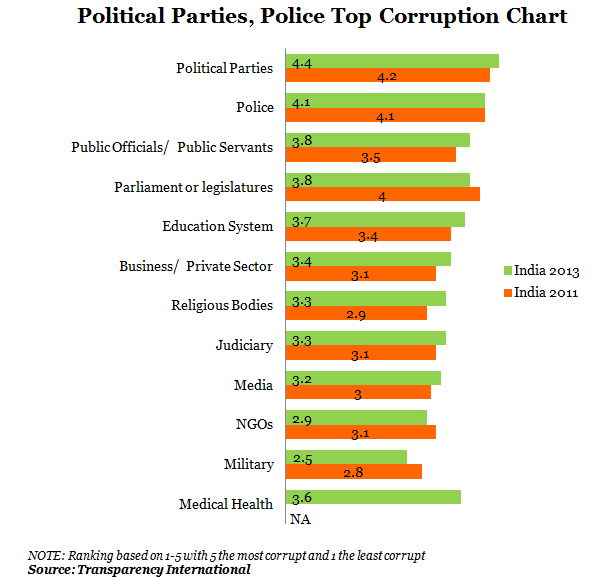 Most of the categories have seen an increase in the perception of corruption. Interestingly, the image of the Parliament/legislatures has improved with the ranking coming down from 4 to 3.8. Similarly, NGOs and military have seen improvements in their perceptions.

The next question asked by Transparency International during the global survey was whether people paid a bribe for specified services. The table below shows an international comparison: 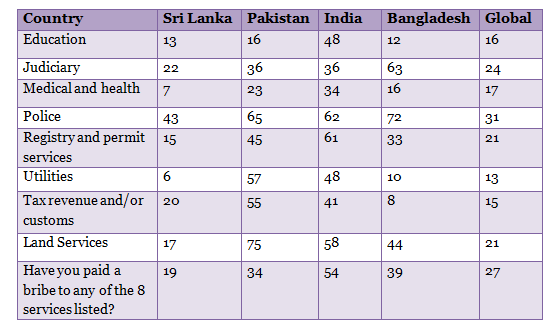 Among its neighbours, India has the highest percentage of people who paid bribes (with 54%) while the global average is only 27%.

When it came to actually paying bribes, the police department topped the charts in almost all the countries. In India, the police was followed by registry and permit services followed by land services.

But all is not lost, according to the same report 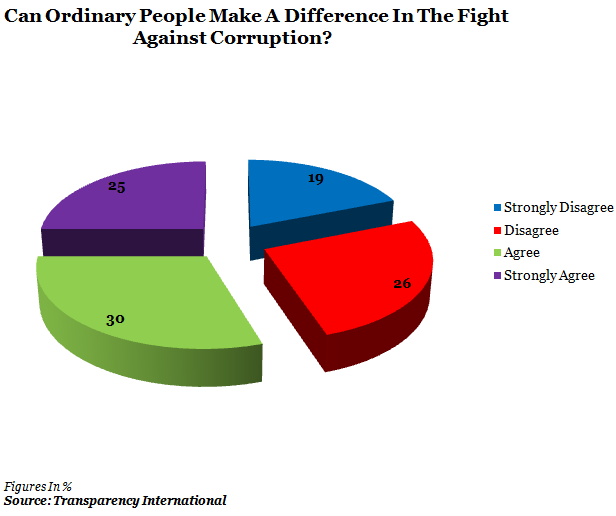 When people were asked whether ordinary people can make any difference, nearly 55% people agreed that they could change the situation. With elections on the horizon, the report paints a grim picture, especially of political parties. The report has also made a few recommendations like cleaning up the democratic processes, and giving people tools and protection to fight against corruption…