India's 93%, 437 Million That Holds Up The Economy But Lacks A Voice 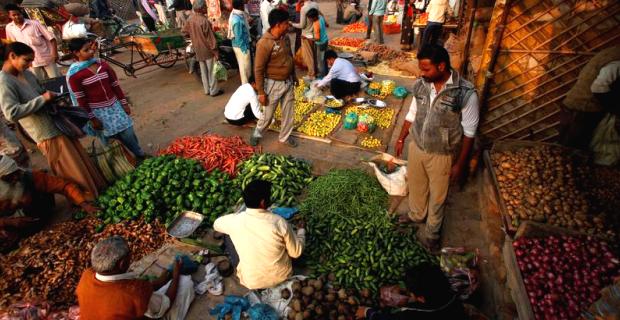 * Over 90% of unorganised labour engaged in wholesale/retail trade

It might surprise some to know that most of the debates on labour issues in India, including the provision of social security & workplace challenges, actually revolve only around 7% of the total workforce.

And yet, as India integrates with the global economy, its the 93% majority that in some ways providing the resources to keep the country competitive and productive. The term is informalisation. And with increased sub-contracting due to globalisation and liberalisation, there is the universe employers are increasingly turning to. 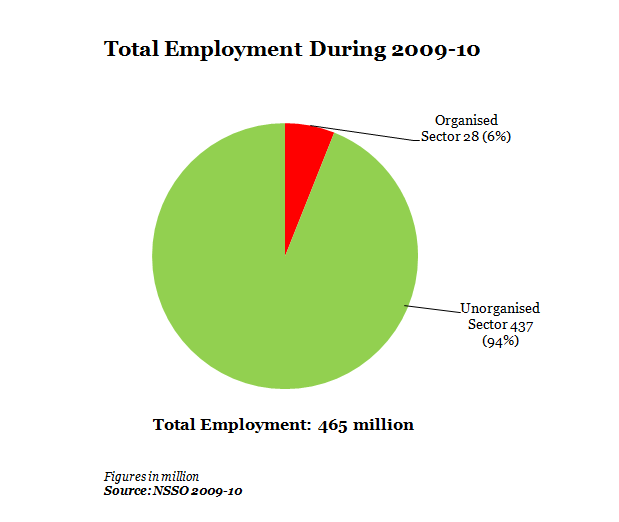 The National Accounts Statistics (NAS), a division of the Ministry of Statistics, defines the unorganised sector as enterprises whose activities are not regulated under any legal provision or do not maintain any regular accounts. Incidentally, a whopping 92% of the workers within the informal sector are involved in non-agricultural activities while only 8% are in agriculture. 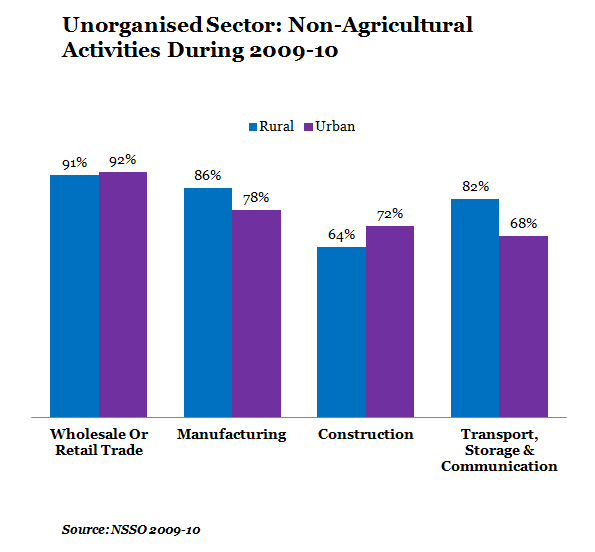 Let us now look at the wages in the rural and urban areas: 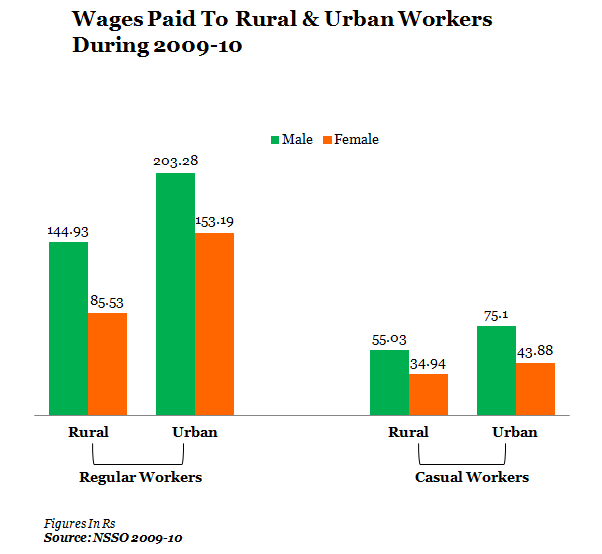 So, it’s clear from Figure 3 that regular workers get better wages compared to the casual or day labourers. And urban workers are paid better than their rural counterparts in both the categories.

The trend continues in urban areas as there are more men in the non-agriculture sector compared to females. 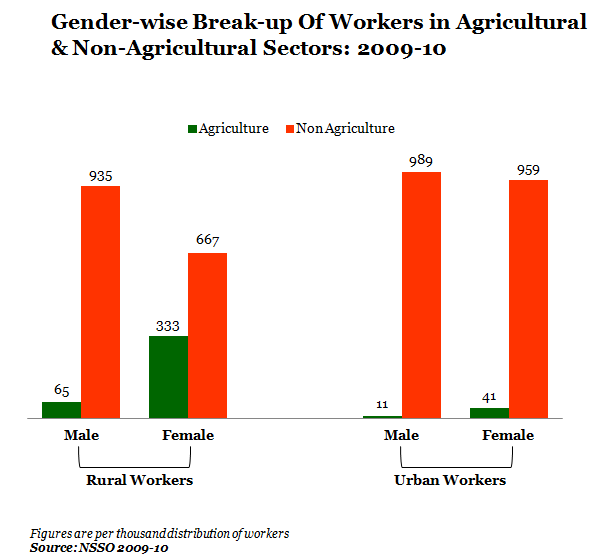 The informal sector is distinguished by the following characteristics:

* The sector is fragmented and also overwhelming in terms of numbers, making it difficult to regulate for the Government.

* There is high level of employment insecurity. Workers do not have stable and durable avenues of employment. Even the ones who appear to be visibly employed are not gainfully and substantially employed, indicating the existence of disguised unemployment.

* There are no provisions for employment benefits for workers. The working conditions are often hazardous to health. And the wages are much lower when compared with the formal sector.

So the need to protect the informal sector workers becomes very evident. In response to this, the Government passed the Social Security and Welfare Act in 2008. The Act provides for the constitution of the National Social Security Board to recommend social security schemes viz life and disability cover, health & maternity benefits and old age protection for workers in the informal sector. The Central Government has also launched various free-of-cost social security measures like the Rashtriya Swasthya Bima Yojana (RSBY), a family insurance programme, the Aam Aadmi Bima Yojana (AABY), a rural-India focused insurance scheme and the Indira Gandhi National Old Age Pension Scheme (IGNOAPS).

Rashtriya Swasthya Bima Yojana (RSBY) was launched on 1st October, 2007 to provide smart card-based cashless health insurance cover of Rs 30,000/- per annum on a family floater basis to families (a unit of five) below the poverty line. As per the latest data, the programme has reached around 34 million beneficiaries.

Figures 5 (a) & (b) show the top 5 and bottom 5 states along with the total smart cards issued till 2012. Interestingly, states like Goa, Rajasthan and Tamil Nadu have discontinued the scheme and some states like Tamil Nadu have launched their own programmes. 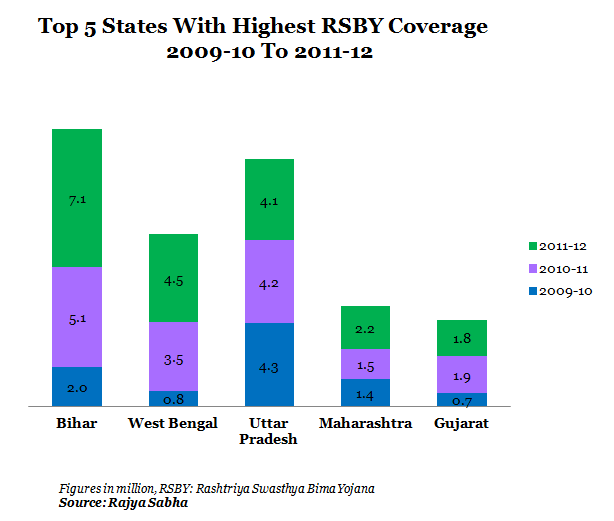 Aam Aadmi Bima Yojana (AABY) was launched on 2nd October 2007 to provide insurance cover to the head of the family or one earning member of rural landless households. The nominees under the programme will get up to Rs 75,000 in case of death of the insured due to accidents. The scheme has already covered 47.5 million people till January 31, 2013.

Figures 6 (a) & (b) list the top 5 and bottom 5 states along with the total number of beneficiaries. 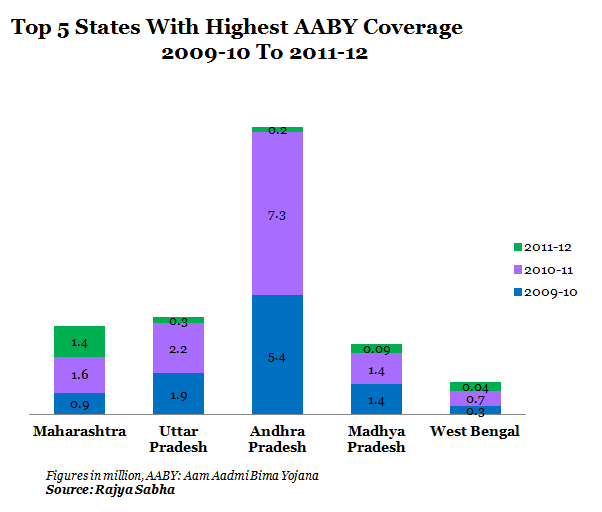 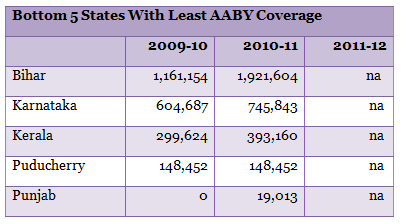 Indira Gandhi National Old Age Pension Scheme (IGNOAPS) offers Rs 200 per month to people below the poverty line and above the age of 60 years. Figures 7 (a) & (b) show the top 5 and bottom 5 states 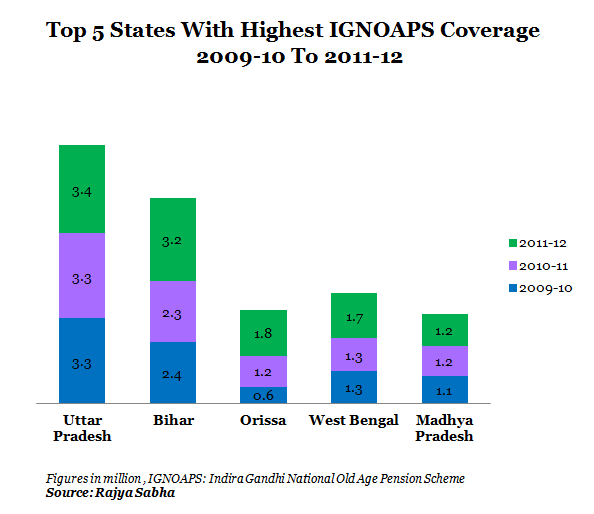 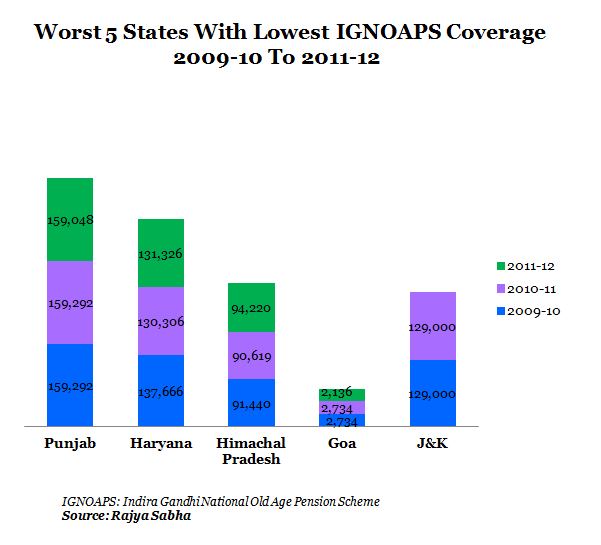 How much has the Central Government allocated for these programmes? 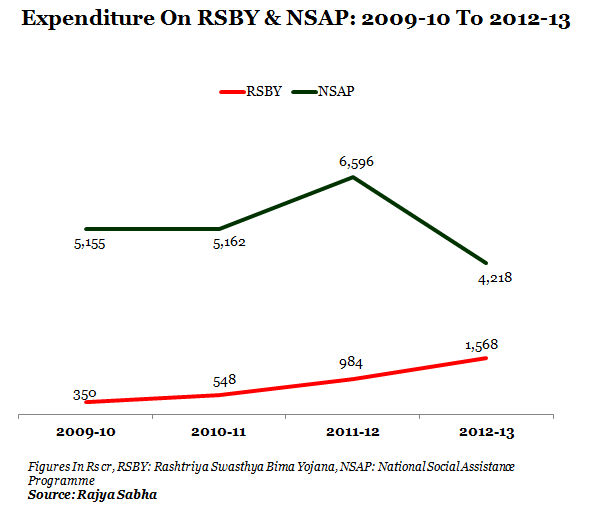 The National Social Assistance Programme, which funds the pension programme, has seen its allocation decline to Rs 4,218 crore in 2012-13.

Finally, a sum of Rs 2,000 crore has been placed with the Life Insurance Corporation for the execution of AABY.

The Government has evidently recognised the problems of the informal sector and is addressing its concerns… but many informal industries are yet to be brought under adequate legal regulation and protection. And workers for whom these policies are designed are very often unorganised and do not have any idea about the welfare schemes meant for them.

The schemes may have helped people to some extent but the impact is quite inadequate as seen in the limited reach of RSBY. So, even though schemes are in place, there needs to be effective engagement of the informal workers in these schemes. The market itself is, not surprisingly perhaps, playing the strong support role in the meanwhile.