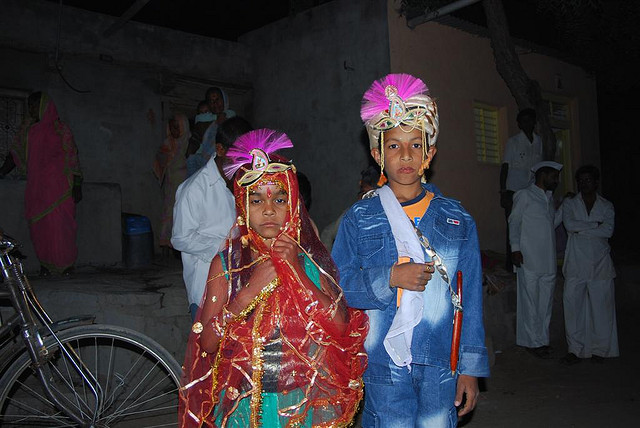 A recent United Nations Children’s Fund (UNICEF)report said 720 million women around the world, alive today, were married before 18 years compared to 156 million men. One-third of these are in India – about 240 million.

IndiaSpend had earlier reported on child brides in India. India is ranked 6th among the top 10 countries based on high rates of child marriages among women. The table below shows the percentage of women in the age group of 20 and 49 years who were married before 18 years. The corresponding female-to-male ratio of Human Development Index (HDI) 2012-13 is also given in the table.

If we compare countries with high child marriage rates, their female HDI ratio is lower than the world average except in Burkina Faso. The data clearly brings out the correlation between child marriage and lower development of women.

The report, however, concludes that the trend of child marriages has been declining globally, especially the trend of marriages below age 15. But the report has some serious implications for India. There is an interesting finding of the UNICEF study: one-third of the child brides of the world are from India. That could well be the fact given the high population of the country and greater proportion of population living in rural areas with low levels of literacy.

UNICEF had earlier released a report in 2012 on child marriages in India. Early marriage, other than lower level of educational attainment, is also the cause for poor maternal health and higher infant mortality rates. Child-bearing at a young age is detrimental to the health of both the mother and the infant. National Family Health Survey (NFHS 3) shows the rate of child bearing in girls aged 15-19 years.

Data shows that 16% or one in six girls in that age group have started bearing children. This is the reason why child marriage affects women more than men other than the fact that men are less likely to be getting married as children.

Let us now look at maternal and infant mortality ratios and reduction targets from the latest Census reports.

We tried to find a link between school enrolment among boys and girls and child marriages in India. The most recent flash statistics from the District Information System for Education (DISE) for secondary and higher secondary net enrolment for girls and boys shows a positive trend. While the rates of enrolment in India in secondary education are very low, the gap between girls and boys is not very high.