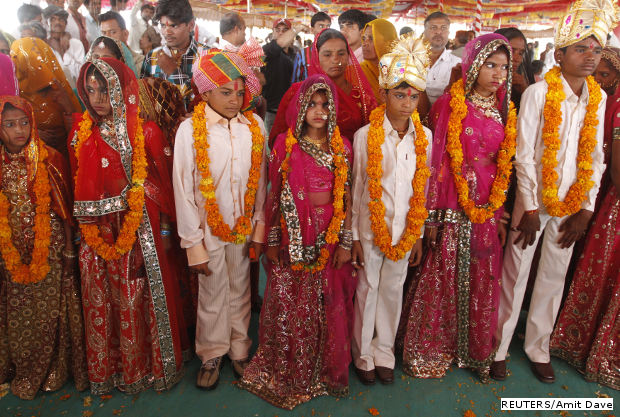 Nearly 17 million Indian children between the ages of 10 and 19—6% of the age group—are married, many of them to older men, newly-released census figures reveal.

Uttar Pradesh has the most married children (2.8 million), followed by Bihar and Rajasthan (with 1.6 million each).

IndiaSpend has previously reported that India is ranked 6th among the top 10 countries that report child marriages among females.

Since the number of married boys is much lower than that of girls, it is clear girls are marrying older men.

For example, Uttar Pradesh has 2 million married girls in the age group of 10-19 years, while 2.8 million in total (boys & girls) are married in the age group; Girls account for 71% of the total married people in this group. It's the same for other states.

Uttar Pradesh has the highest number of children born to children: 1 million.

Child-bearing at a young age is detrimental to the health of both the mother and the infant. This is why child marriage affects women more than men, other than the fact that men are less likely to be married as children.

India's maternal mortality ratio (the number of women who die during pregnancy and childbirth per 100,000 live births) has gone down from 254 in 2006 to 190 in 2014, but it is still higher than the ratio in most other countries.

Infant mortality rate (number of infant deaths for every 1,000 live births) has come down from 68 in 2000 to 56 in 2014, but is still too high and short of human-development targets.

Source: Lok Sabha; MMR data for several states are unavailable and been stated as 0.

The exception is Maharashtra which has a high rate of child marriage but still maintains a low maternal mortality ratio of 68. The reason for this could be improved healthcare services, as this IndiaSpend report has explained.

Married children are part of the 47% of India’s population that is currently married.

Update: A link to a UNICEF study has been modified.