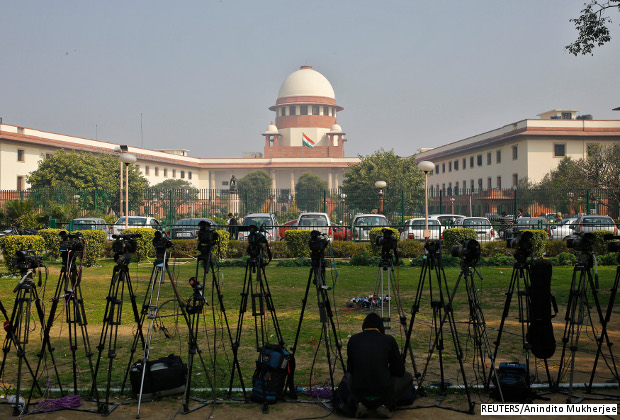 A cameraman setting up his equipment in front of the Supreme Court in Delhi in February 2014.

For the 13 years the Salman Khan hit-and-run case was in trial, it was one of 18.5 million criminal cases pending in India’s district and lower courts, and the 50-year-old Bollywood star was one of 22.2 million people under trial.

Driven by a shortage of prosecutors, judges and courts and—among other reasons—slow procedures, there are more people under trial in India than there are people in the Netherlands or Kazakhstan. Some of the other reasons are the excessive number of lawsuits being filed and an inordinate concentration of work in the hands of some members of the Bar.

In 2013, the cases of as many as 85% of people put on trial were pending, according to National Crime Records Bureau (NCRB) data:

In 2014, the Supreme Court ordered the release of all undertrial prisoners who have been detained in prison for at least half the maximum sentence prescribed for the offences they are charged with. This brought much needed relief to poor people who were languishing in jails as they were not able to pay sureties and bail bonds to get out.

Let us look at the rates of pending cases in a variety of courts across India:

Cases pending as % of all cases in trial during quarter

Criminal cases form 19% of the Supreme Court’s pending cases and 25% of the settled cases.

New cases flood in, and together with the backlog, they outnumber settled cases and increase the caseload. For instance, in the first quarter of 2014, the Supreme Court had 5,466 new criminal cases and 12,211 cases carried over from the previous year, but only 5,267 of those cases were settled.

India has 15 judges for every million people, one of the world’s lowest ratios.

Lower-court vacancies are a leading cause of pending trials, IndiaSpend previously reported, as the table below indicates:

Vacancies as % of sanc. strength

Delays tend to be higher in lower courts and correspond with the number of judicial vacancies. High courts with the most pending cases are also those with the most vacancies, the data show.

Update: The story has been updated with additional information on undertrials in prison and the reasons for the lengthy legal process in India.