Indians Killed Due To Climate Change In 2012 = Population Of Lucknow 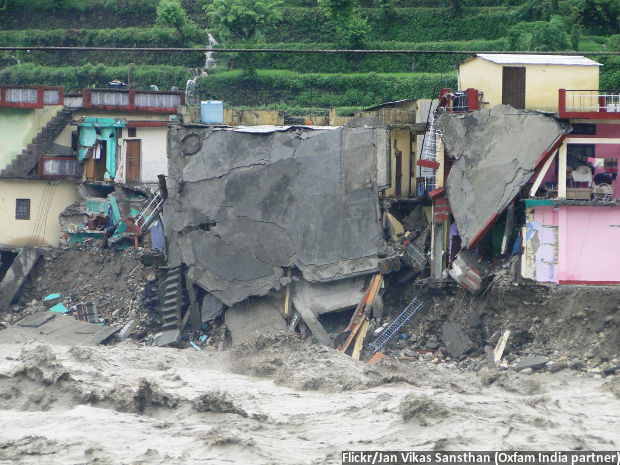 The March 2016 report titled Preventing disease through healthy environments analysed the impact of environmental hazards and risks of climate change on global health across 194 countries.

These deaths--avoidable if governments and citizens adopted sustainable environmental practices--accounted for 30% of all deaths in India that year. In comparison, 25% and 23% deaths, in Pakistan and Bangladesh, respectively, were attributable to the environment, according to the Global Health Observatory (GHO) data. As many as 23% of global deaths (12.6 million) and 26% of deaths among children under five that year were due to modifiable environmental factors, the report said.

Of the 2.9 million deaths in India in 2012, 1.7 million were caused by non-communicable diseases such as heart disease and cancer.

Globally, 31% of cardiovascular diseases are caused by household and ambient air pollution, second hand tobacco smoke and prevalent chemicals in the environment. Of the 49 million disability-adjusted life years (DALYs) lost due to cancer globally, 20% were due to air pollution, mismanagement of chemicals, ultraviolet radiation etc, according to GHO data. The DALY is a measure of overall disease burden, expressed as the sum of years of lives lost due to dying early and years lost due to disability.

As many as 57% of diarrhoeal diseases are caused by poor water, sanitation, hygiene and agricultural practices, due to climate change, according to the WHO report.

Changes in climate not only cause diseases, but also cause extreme temperatures, increasing the likelihood of weather-related natural disasters such as storms, floods and droughts. Since April 2010, water- and earth-based natural calamities caused 15,287 deaths in India, according to an IndiaSpend analysis of government data (here and here). Besides the loss of life, livelihoods were also destroyed with 6.7 million houses damaged and 360,000 cattle heads lost.

Between 2012-13 and 2013-14, there was a nearly five-fold increase in the number of lives lost due to natural disasters.

Of the 5,845 lives lost in 2013, 61% were due to the 2013 Uttarakhand floods. Two main events led to the devastation in the Kedarnath area, according to this 2015 report by the National Institute for Disaster Management. On June 16, 2013, torrential downpour led to active soil erosion near the Kedarnath region. As a result, huge volumes of water studded with debris hit the town, causing massive destruction to 10,625 livelihoods, the report said. This debris collection was caused mainly by the “accelerated depreciation of the environment due to the construction of roads, buildings, hydro-electricity projects, sand and stone collection from river channels, unchecked deforestation etc”.

The second event, which occurred the next day, was caused by the breach of the Chobari Lake, releasing massive flood waters causing more devastating damage in the area.

The Bihar floods in 2016 claimed 243 lives which was the national highest that year--despite receiving 14% lesser rainfall than expected. “India’s poor water management policy seems to be at fault,” according to this August 2016 report by Scroll. “The country’s dependence on large dams, built without environmental checks and balances has upset the Gangetic water system enough to have caused this widespread, unusual flooding.”

As many as 117 countries and territories (54%) were hit by disasters in 2015, according to this October 2016 report by the Centre for Research on the Epidemiology of Disasters (CRED), a Brussels-based non-profit and a WHO collaborating centre as part of the Global Program for Emergency Preparedness and Response.

There was a 14% increase in the number of reported natural disasters in 2015 (376) compared to 2014 (330). The number of climatological disasters (45)--which include droughts, wildfires, extreme temperatures--was the highest since 2005, according to the CRED report.

Update: The story has been updated to say that changes in climate increase the likelihood of weather-related natural disasters.

(Abraham is an intern with IndiaSpend.)