Mumbai: Indians in white-collar jobs, with low levels of activity in their workday, have a higher average body mass index (BMI)--an indicator of obesity--than those in blue-collar occupations, according to a new study.

Engineers, technicians, mathematicians, scientists and teachers, for example, had higher BMIs than farm workers, fisherpeople and housekeepers, concluded the study published in the journal Economics and Human Biology.

BMI is derived by dividing an individual’s body mass by the square of the body height and is expressed in units of kg/m2. The average BMI of men in white-collar jobs was 1.17 kg/m2 higher than those in blue-collar occupations; among women, the difference was 1.51kg/m2, the study showed. A lower BMI is better than higher.

Individuals are categorised as underweight if their BMI is under 18.5 kg/m2, normal if it is in the range of 18.5 to 25 kg/m2, overweight if it is somewhere between 25 and 30 kg/m2 and obese if the index surpasses 30 kg/m2, according to the standards prescribed by the World Health Organization (WHO).

India has experienced high rates of economic growth in the last two decades, and the resultant increase in income is related to a rise in the proportion of those who are obese, according to this study.

India currently has the third highest number of overweight or obese individuals among all countries--20% of its adults and 11% of adolescents can be categorised as obese, according to this September 2014 paper, that has been cited in this study.

“Lower physical activity level at work is possibly one of the factors of rising BMI, given the backdrop that, on an average India has witnessed a decline in energy intake as shown by studies such as Deaton and Drèze, 2009 and Ramachandran, 2014,” Archana Dang, co-author to the study, told IndiaSpend.

Unhealthy levels of BMI are directly related to chronic health risks such as hypertension and diabetes, diseases that can have substantial impacts on household budgets, according to the study.

Given “a reduction in the proportion of workers engaged in heavy work and an increase in the number of workers in moderate and sedentary occupations”, a committee set up to determine how the national minimum wage should be calculated recommended reducing the per head (adult) minimum calorie requirement to 2,400 calories, IndiaSpend reported on March 5, 2019.

However, the committee emphasised that the monetary value for food consumption used in the formula must account for including 50 gm of protein and 30 gm of fat in an adult diet.

The study analysed the BMI of men and women, based on the sector of their occupations, the level of activity at work and their intensity. It focused on adults between 18 and 60 years of age who worked for at least 180 days in the preceding year. 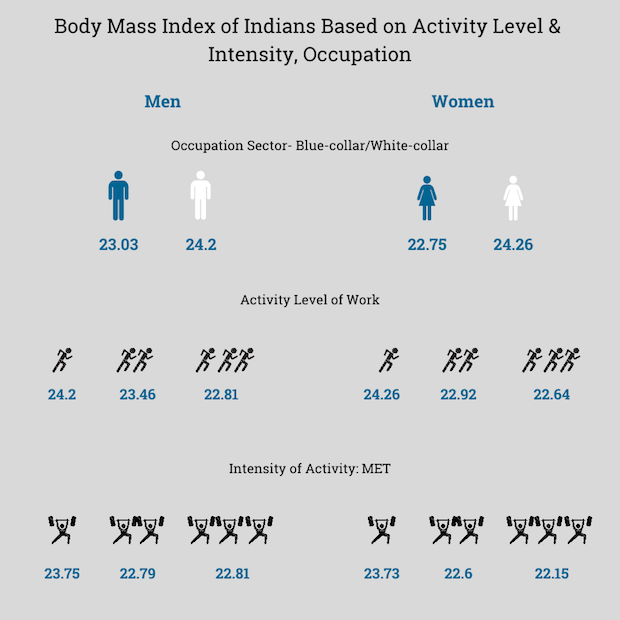 Source: Labor market engagement and the body mass index of working adults: Evidence from India
Note: Figures are in kg/m2

“The WHO cut-off defines individuals as overweight or obese if BMI is greater than or equal to 25, which is the standard benchmark,” said Dang. “But WHO re-defined cut-offs for Asians at 23 because they appear to be at risk for non-communicable diseases at lower levels of BMI than other populations as they have a higher percentage of body fat than, for example, European populations of the same age, sex, and BMI.”

The average BMI of 24.26 kg/m2 in women holding white-collar jobs is “way above the Asian cut-off, which is alarming”, Dang said.

For example, an individual engaged in an activity with a MET value of 4 spends four times the energy used by a body at rest. Occupations were classified on the basis of their MET values: light (MET < 3.00), moderate (MET>3.00 and MET<6.00), and vigorous (MET > 6.00).

Engineers, technicians, mathematicians, scientists and teachers were assigned a value of MET lower than 1.80. Housekeepers, fisherpeople, miners and farm workers were assigned METs in the moderate range. Agricultural and plantation labourers were associated with METs higher than 6.0.

The average BMI of women and men with light-MET jobs was 1.58 kg/m2 and 0.94 kg/m2 more, respectively, than those employed in jobs with vigorous METs. The average MET for white-collar jobs is 1.87 whereas it is 3.23 for blue-collar jobs.

The association between low-activity jobs and high BMI remained significant even after demographic characteristics, education, socio-economic status and various other household characteristics were controlled, the study found.

Threat to health from rise in BMI rises progressively

“In developed countries like America, maximum obesity is seen rising in low-income groups, not in upper classes, because fast-food joints serve really cheap food there,” said Pune-based endocrinologist Uday Phadke. “However, it is different in developing countries such as India where eating at fast-food joints is a matter of [higher] social status.”

Asians are prone to pre-existing conditions of central obesity, or the excess accumulation of fat in the abdominal area, and adiposity (excessive obesity) resulting from unhealthy lifestyles, according to Phadke.

“The thin-fat phenotype which occurs when fat is added to a thin frame is also evident among Indians,” he said. “Hence a slight increase in the BMI levels can be a threat. Also, the threat caused by rising BMI rises progressively--a rise from 30 to 31 is more dangerous than a rise from 20 to 21.”

The results presented in this paper suggest that the increase in BMI observed in India is possibly driven by a ‘structural transformation’ that has led to the decline in employment in the blue-collar sector.

The study prescribes procedures to tackle behavioural risk factors linked with high BMI levels such as increased physical activity and a better diet. It has recommended campaigns to increase awareness about the benefits of an active daily routine, such as a short walk, in one’s commute.

Local governments can be key players in creating an environment which is more conducive to physical activities through their land-use policies, the study suggested. For example, builders can be mandated to provide parks and recreational facilities in new developments.

(Raibagi, a data analyst and a graduate of computational and data journalism at Cardiff University, is an intern with IndiaSpend.)