Reflections From A River: Returning To The Brahmaputra
Haryana’s Sex Ratio No Longer India’s Worst, But Attitudinal Change A...
River Reflections: Impermanence, Erosion, Migration On The Brahmaputra
'Teachers, Not Academics Or Policymakers, Should Lead Education...

Indians, Alert To Dangers Of High Salt Intake, Are Modifying Their Diets 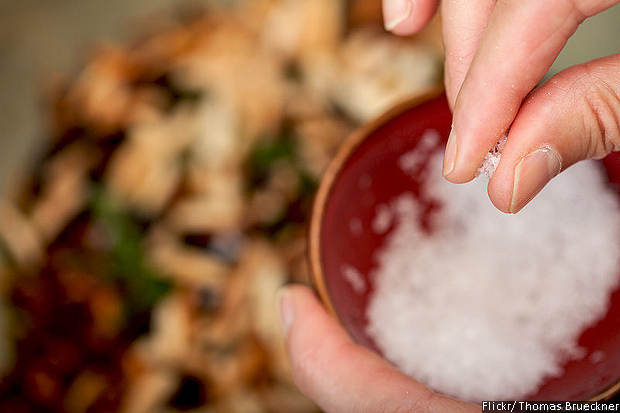 Indians aware of the dangers of excessive salt intake are modifying their diets unlike other international communities like Australians who are sticking to high-salt foods though they are aware of its effects, according to a new study.

Populations in 181 of 187 nations consume more than the WHO-recommended daily upper limit of 5 gm of salt. Indians consume 9% more salt than the global average -- 10.06 gm.

Claire Johnson, a research fellow with The George Institute for Global Health, Australia, led an India-centric study on salt intake in February this year. It included a cross section of 1,395 respondents across India — educated and uneducated, urban and rural, male and female, and of different ages averaging 40 years.

Nine of 10 respondents, 90%, said they were aware that a diet high in salt is bad for their health. When asked the question: “how important to you is lowering salt in your diet?” as many answered affirmatively. Not just that, participants actually acted upon this knowledge, lowering their salt intake.

For instance, 98% participants reported using spices other than salt, 61% said they avoided eating out and 52% maintained that they avoided processed foods.

This implies that greater awareness about the health risks of excessive salt intake could benefit Indians significantly because they are open to lifestyle changes.

Every measure to cut down on salt will benefit Indians, said Johnson. “By lowering your salt consumption by 1 gm, you lower your heart attack and stroke risk by 4.8%. And the more you cut down, the more you gain.”

One in four Indians living in villages and one in three in its cities suffers from hypertension, commonly referred to as high blood pressure. The control of hypertension requires a reduction in salt intake because too much sodium constricts arteries, thus raising blood pressure, and impairs kidney function, leading to extra fluid and extra strain on the associated blood vessels.

India’s health gains could be “enormous,” Johnson told IndiaSpend, if we could cut our average salt/sodium intake by 30%. This would meet one of nine WHO targets to cut premature deaths caused by four major non-communicable diseases. It would also cut the risk of Indians dying by heart attack or stroke by about 15%.

The average Indian consumes 10.98 gm salt a day, according to an earlier Johnson-led study, IndiaSpend reported on November 7, 2016. This is over twice the WHO-recommended upper limit per day, 5 gm, which is just under a teaspoon, and seven times what the body actually needs. 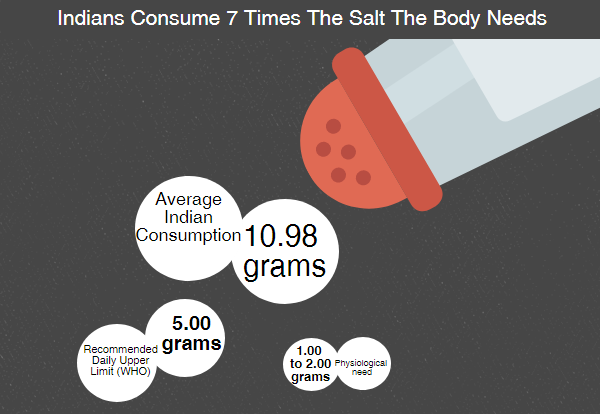 There is a widespread belief in India that in warm weather when the body sweats and loses salt it is imperative to consume more salt. Johnson refutes it. “Irrespective of the weather, physiologically, humans need just one-quarter teaspoon of salt: 1-2 grams which equals 500 mg of sodium daily,” Johnson told IndiaSpend.

About 10% of the 10.98 gm daily salt intake of an Indian occurs naturally in fruit, vegetables, cereal and other raw ingredients, said Johnson. The rest is added during cooking or at the table.

So, cutting down for Indians involves adding less salt during cooking and on the table. Both are more doable than making the major dietary changes implicated in controlling salt-intake in the west, where the excess consumption generally comes from salt added to processed foods such as pasta sauces.

India has seen great dietary changes in the last 30 years, noted Johnson. “Indians are eating less pulses, fruits and vegetables and lots more processed and fast foods, and as a result, their diets now include excess salt, sugars and harmful fats,” she said. “These are driving up rates of high blood pressure, obesity and cardiovascular diseases, such as heart attack and stroke.”

Currently it is impossible to reckon how much salt you are getting from packaged foods in India.

(a). 1 in 4 products fail to meet the (so far, voluntary) nutrition information labelling guidelines of the Food Safety and Standards Authority of India, and

(b). 2 in 3 products do not list salt on the nutrition information panel and fail International Codex Alimentarius requirements, a collection of standards, guidelines and codes of practice aiming at protecting consumer health and promoting fair practices in the food business.

This may change soon. New Food Safety and Standards Authority of India (FSAI) labelling regulations for all packaged foods are on the anvil.

“Our new guidelines, which should come into effect in a few months, will make it mandatory for packaged food labels to list their salt/sodium (and other nutrients) content, in total and against the recommended daily value,” Pawan Kumar Agarwal, CEO of Food Safety and Standards Authority of India, told IndiaSpend.

In the mid-1950s, urban India reported a hypertension prevalence of 1.2% to 4.0% based on the WHO blood pressure diagnosis guidelines then in vogue—diastolic blood pressure exceeding 95 mmHg, a systolic reading exceeding 160 mmHg.

The prevalence increased to 5% in the 1960s, then to 12% to 15% in the 1990s. Today, about 33% of urban Indians are hypertensive based on revised WHO guidelines—diastolic blood pressure exceeding 90 mmHg, and a systolic reading exceeding 140 mmHg.

Significant disparity exists between the urban and rural prevalence of hypertension, and also between different regions, as per the 2014 study, Hypertension in India: a systematic review and meta-analysis of prevalence, awareness, and control of hypertension.

Source: Hypertension in India: a systematic review and meta-analysis of prevalence, awareness, and control of hypertension

“Assam in particular has a higher prevalence because of the high consumption of salt, alcohol, and khaini among tea plantation workers; this impacts the average of rural east India,” said Raghupathy Anchala, associate professor at the Public Health Foundation of India-IIPH, Hyderabad and author of the study on the prevalence of hypertension in India.

Urban India showed markedly less variance, with the west seeing a slightly higher prevalence than the north, 35.8% as compared with 28.8%.

Hypertension is a silent killer with few symptoms such as headaches, shortness of breath or nosebleeds, according to Mayo Clinic. In general, hypertension causes so few symptoms that by the time it becomes obvious, the body could have suffered irreparable damage.

Like Narendra Yadav, 45, supervisor of a laundry ironing service in district Sirohi, Rajasthan. In early December 2016, he suddenly took severely ill with what seemed to be breathlessness and some congestion. 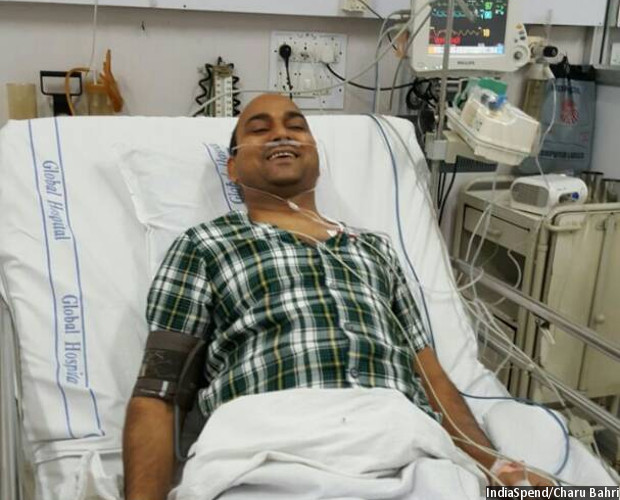 Last year, Narendra Yadav, 45, a resident of Abu Road, Rajasthan, suddenly took severely ill with what seemed to be breathlessness and some congestion. Doctors diagnosed him with hypertension, mild left ventricular failure, and renal failure, the latter being one of the most severe outcomes of uncontrolled hypertension, which in his case has meant a weekly dialysis to stay alive. Yadav had no idea that he was hypertensive, which just goes to show the importance of regular blood pressure checks.

Doctors diagnosed Yadav with hypertension, mild left ventricular failure, and renal failure, the latter being one of the most severe outcomes of uncontrolled hypertension, which in his case has meant a weekly dialysis. “I had no idea that I had blood pressure,” said Yadav.

Why is hypertension difficult to control?

Physicians quoted the rule of 50 to explain poor hypertension control, which means: 50% of the hypertensive population is unaware of their condition. Of those who know, only 50% are on appropriate treatment and 50% of those have their hypertension in check.

“Low awareness about hypertension is a bigger problem in rural India than in urban settlements,” according to Jugal Kishore, director, professor and head, community medicine at Vardhman Mahavir Medical College, New Delhi, based on the findings of his 2016 study Prevalence of Hypertension and Determination of Its Risk Factors in Rural Delhi.

Cost of treatment is also an issue, said Kishore, as only about 30% Indians avail free health services from the public sector. “Also, the less privileged are intimidated by big hospitals, and the investigations involved in diagnosing a chronic problem, so they tend to ignore symptoms.”

Blood pressure medication is typically prescribed for a lifetime, which can be hard to accept. Vidhi Ahuja, 34, a communications professional working in Gurgaon, was diagnosed hypertensive at 27. She attributed this to “obesity, work stress and stress from balancing home and work, and my family history.” 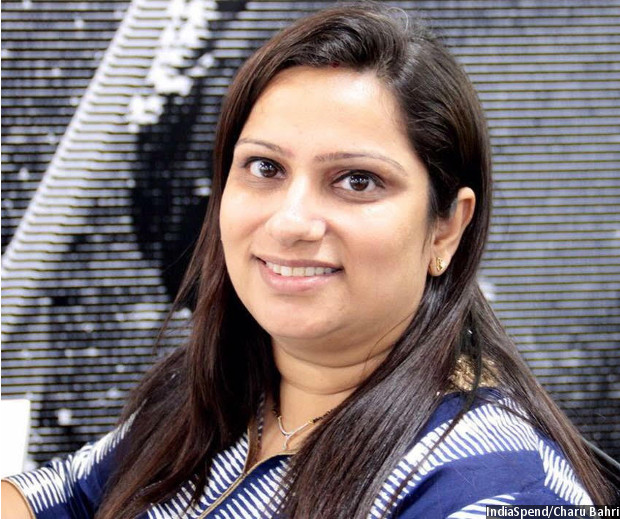 Vidhi Ahuja, 34, a communications professional working in Gurgaon, was diagnosed hypertensive at 27. She attributes her condition to obesity, work stress and stress from balancing home and work, and a family history of hypertension. Regular walks, cutting down on salt and eating healthier have helped to reduce her medication dose.

Ahuja is forever fending off well-meaning comments from relatives who would like her to come off the medication. “I have tried to go off the medicine but it hasn’t worked. But regular walks, cutting down on salt and eating healthier have helped to reduce my dose,” said Ahuja.

It also helps to manage stress. One in six hypertensive cases can be attributed to the mind-body connection, albeit these are more likely to be people in high profile jobs who take a lot of stress from work.