Indian Women More Likely To Die Of COVID-19 Than Men, But More Data Needed To Know Why

Navi Mumbai: Indian women who contract COVID-19 are at a higher risk of dying than men, a recent study of cases until May 20, 2020, has found--3.3% of infected women died of the disease compared to 2.9% of men.

“The data till May 20, 2020 suggests that the overall risk of mortality among women is slightly higher than men,” said William Joe, assistant professor at the Population Research Centre at the Institute of Economic Growth, Delhi, and the lead author of the study.

The ratio of confirmed deaths to total confirmed cases is called the case fatality ratio (CFR). Higher CFR among women “is largely driven by a significantly higher risk of death among women in the age group 40-49 years. In all other age groups, including the elderly, we find that the mortality risk among men and women is more or less similar”, Joe said.

In other countries for which data are available, “preliminary evidence” suggests that men are at a greatest risk of dying from the disease, but these "inferences should be carefully interpreted,” the study said.

In terms of overall numbers, more Indian men are diagnosed with and are dying of COVID-19 than women, as per data from the study. Fewer women overall are being tested for COVID-19 in India--of all tests, 67% were on men between January 30 and April 30, 2020, a June 2020 study had found. Further, though more men are diagnosed with COVID-19, a higher proportion of women tested were positive (4.2% women versus 3.8% men).

A higher percentage of women than men in India are malnourished and anaemic while a higher percentage of men have pre-existing health conditions such as diabetes and hypertension, or comorbidities. Both comorbidities and poor nutrition are related to COVID-19 fatalities. But as the Indian government does not provide demographic and medical data on COVID-19 patients, experts caution against drawing conclusions about the gender differences in deaths. 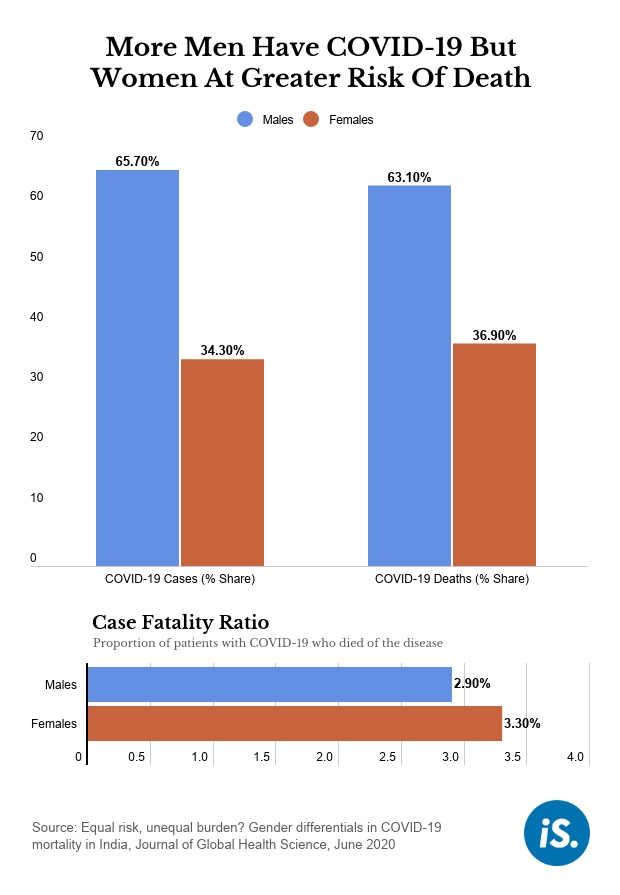 The researchers said they had used a crowdsourced database called COVID19India since the Indian government has not released demographic data of COVID-19 cases in a consistent manner.

The researchers acknowledged two limitations: One, that the data were crowdsourced, and two, that India’s testing numbers are low. A higher rate of testing could change the patterns, they said.

The study takes forward concerns raised by an article in The Lancet, which said that even as India had few COVID-19 cases in April, COVID-19 could affect men and women in different ways, because “inequities disproportionately affect their [women’s] wellbeing” and the strain of child care and housework falls more on women.

More men dying, but the details reveal a different picture

COVID-19 infects the two genders nearly the same way, with 48.8% being men, according to data from United Nations (UN) Women.

Roughly, in India, one in every three (34.3%) patients infected with COVID-19 is a female. About the same number of boys and girls in the under-five and elderly categories have COVID-19 but more men than women have the virus in the middle-age groups, found the JGHS study.

In terms of deaths, more men appear to be dying globally. Of 47 countries for which sex-aggregated data are available, more men died in 42 countries, when compared to women, according to data from Global Health 50/50--an independent initiative of the UCL Centre for Gender and Global Health, UK. India is not a part of that dataset.

In the US, a larger proportion of infected men (6%) died of COVID-19 than women (4.8%) between January 22 and May 30, and a similar number of men and women were infected with the virus, according to the US Centers for Disease Control and Prevention. In England, too, the male CFR (22.1%) is higher than the female CFR (12.3%), according to data from Global Health 50/50. In Bangladesh and Pakistan, the CFR for men and women is about the same.

Globally, “Some studies suggest higher mortality among men,” said Joe, but cautioned that the data need to be reviewed before drawing any conclusions.

Adverse outcomes for COVID-19 are associated with comorbidities including hypertension, cardiovascular disease and lung disease--all conditions more prevalent in men and linked to smoking and drinking, according to the April 2020 Lancet article. This explains, why, overall there would be more male deaths.

In India, “since a greater number of men are getting infected with COVID-19, we also expected that a greater number of men would be dying from this cause”, said S.V. Subramanian, professor, Department of Social and Behavioral Sciences at the Harvard T.H. Chan School of Public Health, and a co-author of the study. “But the whole focus on numbers can undermine the risks that a woman may face if she gets infected with COVID-19.”

Treatment and healthcare should not be biased against women merely because of statistical observations that a greater number of men are dying with COVID-19, Subramanian said.

The pandemic is “expanding rapidly” and the finding that women are more at risk of dying of COVID-19 than men in India should be “treated as preliminary insights”, said Joe. "We have to keep updating the analysis till we arrive at more complete data to describe all age-sex specific patterns."

Why Indian women could be disproportionately affected

This study did not explicitly look at why more women were dying in certain age groups relative to men, but one possible reason could be nutrition. Roughly one in every two (53.1%) Indian women in the age group of 15-49 years is anaemic, compared to one in every four men (22.7%), according to the National Family Health Survey (2015-16).

“Nutritional status is a key factor in immune response,” said Subramanian. “Poor physical fitness and respiratory health because of the household and environmental conditions also affects women disproportionately. These are all gendered concerns and should receive policy attention.”

Indoor air pollution, mainly due to cooking on firewood, is documented to have an adverse impact on women’s health. A poor immune system could mean more women are succumbing to the virus. But to understand this further we would need to know more about the socio-economic characteristics of the people who died, which is unavailable in India, experts said.

“It is not enough to know the rate [of COVID-19 infection] and the number [of cases],” said Lakshmi Lingam, professor at the Tata Institute of Social Sciences (TISS) and an expert on gender issues. “Who are these people who are dying? Are these COVID-19 warriors, or the ASHA [Accredited Social Health Activist] workers as they have been asked to do door-to-door surveys?” she asked. Lingam said that frontline workers, including nurses, tend to be predominantly women. She said it would be incorrect to generalise that women in a certain group are dying more due to COVID-19 without ascertaining such details.

IndiaSpend earlier reported how India’s healthcare footsoldiers, ASHA workers, were tracing contacts of COVID-19 patients without adequate protection, putting them at risk of infection. In our report from India’s COVID-19 hotspot Mumbai, we reported on junior healthcare workers at risk of infection because they were being sent into city slums without adequate protection.

“These healthcare workers often themselves live in slums because they get paid very little and can’t afford decent housing. Unless officials share the socio-economic demographics of the confirmed cases and the COVID-19 deaths, we can’t draw conclusions,” said Lingam. Even if we knew a detail like the presence of a cluster of cases around a particular slum, that could be misleading as it could be a cluster of healthcare workers, for instance, Lingam explained.

The gendered impact of COVID-19 is a concern for other countries in Southeast Asia as well, with data from the region suggesting that women are facing greater barriers accessing information related to COVID-19, facing longer wait times at health facilities and having a harder time accessing healthcare. This dataset does not include data from India or China, though it does have data from Pakistan, Bangladesh and Nepal.

Experts also cautioned that what might be true in one country might not be for another and as India responds to the pandemic, it will be important to take into account local contexts and evidence.

(Shetty is a reporting fellow at IndiaSpend. Editing by Shreya Khaitan.)