Haryana’s Sex Ratio No Longer India’s Worst, But Attitudinal Change A...
'India Should Produce Smallpox Vaccines To Combat Monkeypox'
84% Of 12 Million Married Children Under 10 Are Hindus
This April, More Places In India Saw 45+ Temperatures In A Decade 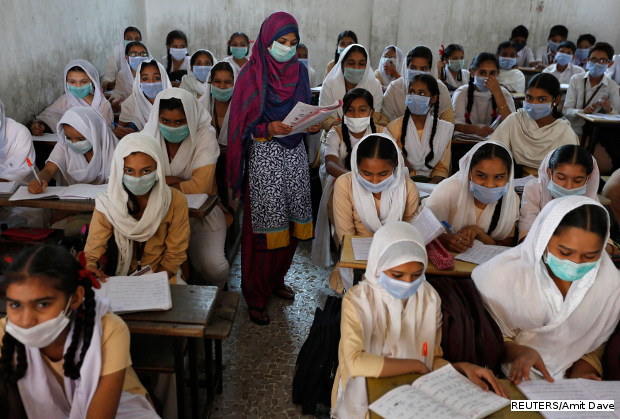 A potentially virulent and distinct strain of the swine-flu virus that continues to kill and panic people appears to have taken hold in India, a new study conducted by scientists at Massachusetts Institute of Technology (MIT) has found.

This is contrary to a recent Indian assertion that no mutations were found in the version of the H1N1 virus circulating in India (A/California/04/2009—to use its official name), a strain first identified during a pandemic in the US state of California in 2009.

The official Indian stand, made clear here, declares the Indian strain to be “antigenically stable”, meaning it has not mutated.

But an examination of the genetic sequences—or alphabet chains—of the Indian H1N1 strain reveals important changes linked to greater virulence, according to the MIT paper released today in the international journal Cell Host and Microbe.

These changes in the virus’s genetic alphabet potentially allow it easier binding and entry into human cells and more efficient transmission.

A clue to how the H1N1 virus is evolving genetically comes from Florida, where another study discovered just such a mutation. "Genetic changes in this virus must be monitored to predict the effect of future pandemic viruses," the study said.

These mutations might explain why the current outbreak, which should have faded with the onset of warmer weather, continues, the study’s co-author, Ram Sasisekharan, told IndiaSpend in an e-mail interview. The other author is Kannan Tharakaraman, a research scientist.

As on March 9, swine flu had claimed 1,482 lives across India and infected 26,000. As the graph below shows, this is easily India’s most devastating H1N1 pandemic in recent years.

“In addition to the mutations responsible for increasing human receptor binding and virulence, other factors, such as the high population density in India, ease of person-to-person transmission, potential for inter-species transmission and lack of sophisticated farming practices could potentially aid the circulation of this virus,” said Sasisekharan, a professor of biological engineering at MIT in the US.

India deposited only two genetic sequences as samples that could be studied in public genetic databases (some examples are here and here) globally during 2014-15, which suggests poor surveillance.

“Surveillance involves having some simple, standardised protocols in place,” said Sasisekharan. “This includes continuous monitoring and timely reporting of outbreaks, sequencing of viruses in human and animals, particularly subtypes that are known to infect or spread in humans, and rapid dissemination of whole viral genome sequences in public databases.”

The virus strain that the Indian government believes is circulating in India, A/California/04/2009, spread across 74 countries in less than a year. In its genetic structure, said Sasisekharan, the virus is similar to the 1918 Spanish flu virus, which killed more than 40 million people and infected half the world’s population.

However, in its ability to bind to a particular receptor on human cells, the California version of the Spanish flu virus was considerably less efficient. This is why monitoring the genetic structure of flu viruses is important in predicting outbreaks.

Sasisekharan and a group of scientists previously demonstrated that it does not take much for the California strain of the H1N1 to become deadlier.

It requires only a relatively uncomplicated two-letter change in the genetic code of H1N1 to induce a mutation that could make the virus more virulent, Sasisekharan and his colleagues showed in 2011, in laboratory experiments.

More study—and greater scientific openness from India—should reveal if that laboratory warning could have become reality.