Tall high rises with pockets of slums adjoining them are a common sight in a bustling metropolis like Mumbai. It is now well documented that slum dwellers enjoy a higher level of economic prosperity than rural India where they often hail from. But they also have to face tough living conditions like overcrowding, lack of hygiene and sanitation, inadequacy of drinking water and poor construction.

It has also been felt in recent years that increased migration to the cities and inadequate or lack of affordable housing would lead to more slums being built. And yet, as new findings show, their numbers are coming down.

Numbers recently released by the Ministry of Statistics & Programme Implementation (MoSPI) show that the total number of slums in urban India has declined 32% to 33,510 from 49,000 in 2009. This is based on data collected in its 69th round survey between July 2012 and December 2012.

To put the overall numbers in context, India’s urban population is now 31% i.e. 377 million out of a total population of 1.2 billion.

So, how does the Government define a slum? As per the National Sample Survey Office (NSSO) of the Ministry of Statistics and Programme Implementation (MoSPI) , any compact settlement with a collection of poorly built tenements, mostly of temporary nature, crowded together, usually with inadequate sanitary and drinking water facilities in unhygienic conditions, provided at least 20 households lived there, was considered a slum.

Both notified slums i.e. areas notified as slums by concerned municipalities, corporations, local bodies or development authorities and other slums were covered in the survey. The last survey on slums was conducted as part of the 65th round of NSS (July 2008- June 2009). 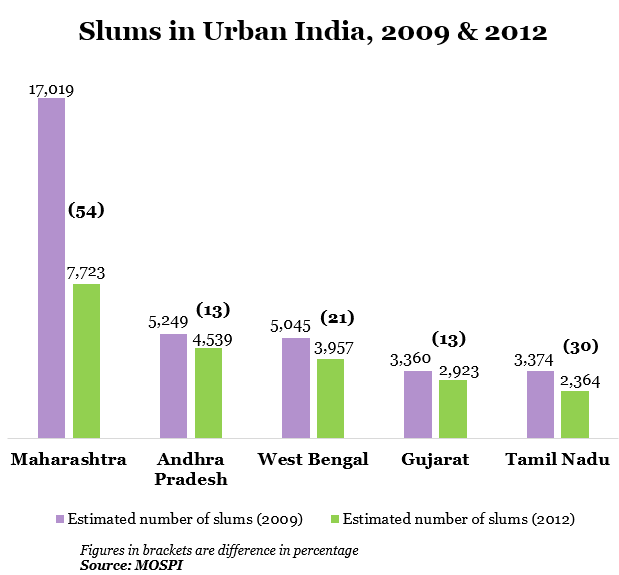 Tamil Nadu also saw a decline of 30% to 2,364 slums from 3,374 slums in 2009. West Bengal, Andhra Pradesh and Gujarat also saw double digit declines in the number of slums.

Over 71% slums at the all-India level had tap water as the major source of drinking water. Here are some other infrastructure indicators: 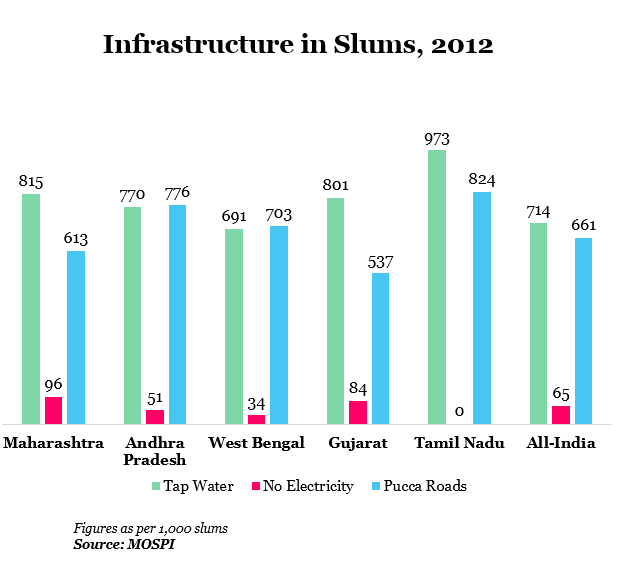