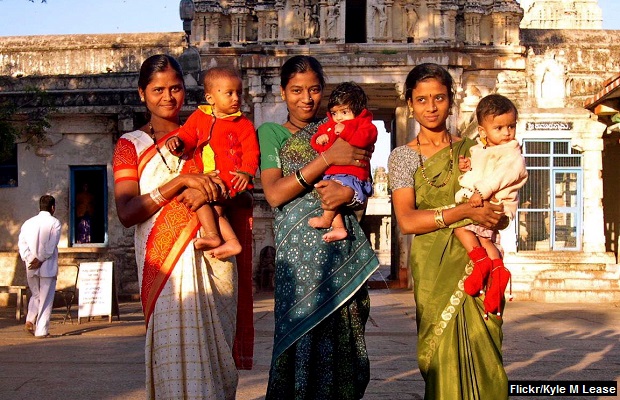 Fertility rates in India are more closely related to education levels and the socio-economic development within a state, than to religious beliefs, according to an IndiaSpend analysis of government data and research evidence.

When the office of the Registrar General and Census Commissioner of India released fertility rates for the Indian population last year, the conversation was hijacked by the difference in population growth rates across religions. Several newspapers emphasized that the data showed that Muslim women had higher fertility rates than non-Muslims, and that the percentage of Muslims in the population was steadily growing.

This implicit suggestion that Muslims have more children than other religious communities, missed data that shows how population growth rates and the Total Fertility Rate (TFR)--or the average number of children a woman has over her childbearing years--vary widely between India's states. The TFR seems more closely related to per capita income, healthcare and other basic facilities in that state.

Development and fertility: The case of Kerala and UP

The higher growth rates of Muslims in northern states are “more or less part of a northern culture than a Muslim culture”, N.C. Saxena, the former secretary of the Planning Commission of India, said in an interview to The Wire, a nonprofit journalism portal . This is in sync with higher average TFRs in northern and central states, such as UP (3.3), Bihar (3.5), Chhattisgarh (2.7), and Madhya Pradesh (2.9), as compared to southern states like Andhra Pradesh (1.8), Karnataka (1.9), Kerala (1.8), and Tamil Nadu (1.7), according to 2011 census data.

The states with the highest fertility rates in India are all in north and central India – Bihar, Uttar Pradesh, Madhya Pradesh, Rajasthan (TFR 2.9), Jharkhand (2.8), and Chhattisgarh.

One reason for the higher Muslim fertility within a state, could be because of wealth-related factors.

On average, Muslims across India are poorer than Hindus across India, with an average monthly household per capita expenditure of Rs 833, compared to Rs 888 for Hindus, Rs 1,296 for Christians and Rs 1,498 for Sikhs, according to a 2013 National Sample Survey report, based on data from 2009-2010.

Researcher Sriya Iyer, a professor at the University of Cambridge, said that religion does not have a statistically significant effect on fertility if other factors such as “access to education (quantity and quality), income, whether couples have help with childcare or not, local health care provision (quantity and quality) that lowers infant mortality and hence increases child survival, and the degree of urbanisation of the community” are taken into account. Further, her 2002 study in a Karnataka taluka (an administrative sub-division of a district) found that both Hindus and Muslims had more children than Christians, but she argued that religion affects fertility and contraception through other socio-economic factors, such as a family’s decision to educate its children, rather than through the ideological tenets of a religion.

Socio-economic factors affect the fertility of religious groups in different ways. For instance, higher education for women, and secondary education for men, lowers the fertility of Muslims but not of Hindus or Christians, the study reported, suggesting that family planning programs might have to be designed keeping in mind these differences.

Further, Iyer said, evidence from India showed that, over the long term, “TFRs between religious groups are projected to converge, as women from all religious communities are having fewer children today than their mothers or grandmothers”.

Indian women have more children than counterparts in many Muslim countries

There is little evidence internationally of the correlation between religion and fertility rates.

For instance, according to World Bank data, in 2014, Bangladesh, India’s Muslim-majority neighbor, had a TFR of 2.2. Iran, another Muslim country, has a TFR of 1.7, below replacement level, which means the current population cannot be replaced at the prevailing population growth rate.

Fertility rates also depend on a number of factors unrelated to religious group. For instance, socioeconomic-factors, education, modernization, access to contraceptives, and state policies for development, all affect fertility, according to P. Arokiasamy, the head of the department of development studies, at Mumbai-based International Institute for Population Sciences (IIPS).

In addition, population growth rates also depend on other factors such as work opportunities for women, access to contraception, age at marriage, and decision making power within the household. For instance, a meta-analysis of studies, published in 2014, found a positive correlation between women’s empowerment and lower fertility, longer birth intervals, and lower rates of unintended pregnancy.

Fertility rates of populations that have higher fertility, such as low-income families and Muslims, are falling faster than other groups, as methods of contraception and education spread to these groups, explained Arokiasamy of IIPS.

(Shah, a freelance journalist, is a graduate of the Global Human Development program at Georgetown University, USA).