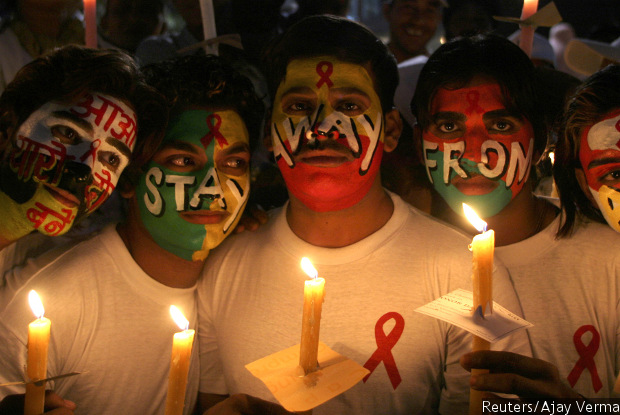 Indian men are more likely than women to have comprehensive knowledge about HIV/AIDS (Human Immunodeficiency Virus/Acquired Immunodeficiency Syndrome); yet the disease is more prevalent among men, an IndiaSpend analysis of government data shows.

Among other conclusions, the survey emphasised that mutually exclusive relations with one partner can reduce one’s chances of getting HIV/AIDS; a healthy-looking person can have HIV/AIDS, so using a condom is a must for every sexual encounter; and Indians must reject common misconceptions about transmission or prevention of HIV/AIDS.

Some such misconceptions include: Sharing food, cutlery, and clothes spreads AIDS; both partners have HIV, so no protection is needed; and you cannot have sex with an infected person without acquiring HIV/AIDS.

In 31 of the 35 states and union territories (UTs) surveyed, more men display comprehensive knowledge about HIV/AIDS than women. Only in Tamil Nadu, Delhi, Puducherry and Daman & Diu is there greater awareness among women.

As many as 49% of women in Punjab have comprehensive knowledge about HIV/AIDS, the highest among all states. The lowest figures are 9.3% in Dadra & Nagar Haveli and 9.4% in Assam. 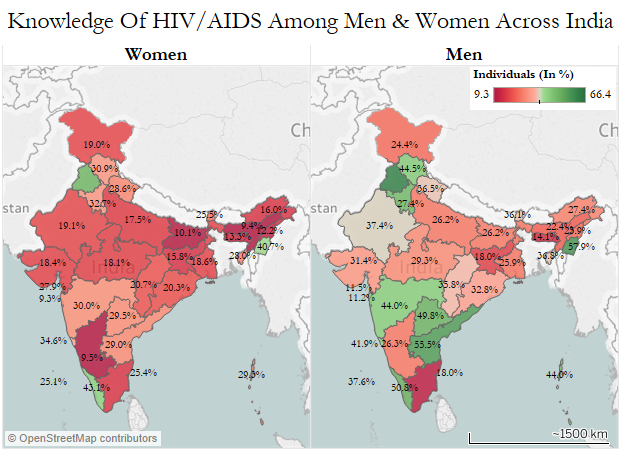 Therein lies the gendered paradox of HIV/AIDS in India.

Despite higher levels of awareness, men are more affected than women--both in absolute numbers and proportionally. Of the 2.1 million HIV/AIDS affected people across India, 1.26 million (60%) are men, according to National AIDS Control Organisation’s (NACO’s) India HIV Estimations Report 2015.

The HIV prevalence rate among adults nationwide is 0.26%--0.30% for men and 0.22% for women. This puts the number of HIV cases in India behind only those in South Africa and Nigeria, IndiaSpend reported in April 2016. Yet 56% of infected Indians do not get the drugs they need.

Infection rates have been on the increase among women and infants in some states, especially in rural areas, for a while, as this 2012 World Bank blog noted.

One possible explanation of this rise is migration. There are an estimated 7.2 million migrant workers in India, of whom 0.99% are living with HIV, according to a NACO estimate. Three in four women testing positive in India have a husband who is a migrant labourer, according to this 2014 report by UNAIDS India.

This trend may worsen with faster migration--2016 reported faster rural-to-urban migration due to a collapse in rural jobs, IndiaSpend reported in June 2016.

Further, married Indian women who experience physical and sexual abuse at the hands of their husbands are nearly four times more likely to become infected with HIV than married women who were not abused, this 2008 study by the Harvard School of Public Health showed.

Barring Daman & Diu, across 35 states and UTs, more men than women are aware that consistent condom use can reduce the chances of getting HIV/AIDS. Yet, over the eight years to 2016, the use of contraceptives has declined almost 35%, as abortions and consumption of emergency pills--both accompanied with health hazards and medical side-effects--doubled, IndiaSpend reported in February 2017. 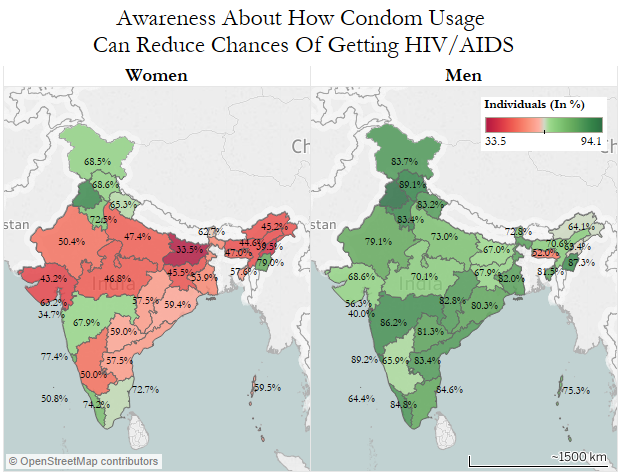 Social awkwardness, often induced by lack of privacy in stores, hinders condom use, this 2011 study among unmarried men from rural Madhya Pradesh showed. Though 96% of the interviewed men knew where to access a condom, they felt uncomfortable or embarrassed doing so in their own villages or close by.

A perceived link between masculinity and risky sexual behaviour also impacts condom use. Socially constructed masculinist ideals of “sexual conquest”, experimentation and entitlement are major contributing factors to risky sexual behaviours which include unprotected sex and sex with multiple partners, according to this 2005 study conducted in Uttar Pradesh by researchers from the University of North Carolina.

However, the category ‘men’ is heterogeneous--it includes heterosexual and homosexual men, as well as men who have sex with men (MSM, regardless of whether they identify themselves as male or female). There are 0.43 million MSM in India, and 4.3% of them are living with HIV, according to NACO’s 2015-16 annual report.

MSM, truck drivers, sex workers and injecting drug users are classified as vulnerable groups in India, although HIV/AIDS prevalence in these groups has declined over the past few years, thanks to longstanding targeted interventions focusing on behaviour change and increased condom use, according to this 2015 India progress report by NACO.

At 1.15%, Manipur has the highest estimated adult HIV prevalence rate, followed by Mizoram (0.8%) and Nagaland (0.78%). However, in absolute terms, Andhra Pradesh & Telangana have the maximum number of cases (0.39 million) of people living with HIV, followed by Maharashtra (0.3 million) and Karnataka (0.19 million).

HIV prevalence at the national level has declined from an estimated peak of 0.38% in 2001-03 to 0.26% in 2015, which can be attributed to large-scale implementation and high coverage of India’s AIDS programme.

“There are no real “innovations” in India’s approach to HIV prevention planning but, rather, sound policy making: investment in good data to inform decisions; analysis of the data to determine the epidemic drivers; and comprehensive plans and budgets for scaling up known interventions directed at those populations with the behavior that is responsible for the most exposure to HIV, without moral undertones,” according to this 2015 analysis of India’s approach to tackling HIV/AIDS.

Annual AIDS deaths have declined since the rollout of the free antiretroviral therapy (ART) programme in India in 2004.

In October 2016, the Union cabinet of ministers approved amendments to the HIV-AIDS Bill 2014 to safeguard the rights of people living with AIDS or recently affected by HIV. According to the proposal, every HIV-positive or AIDS-affected person below the age of 18 years has the right to reside in a shared household and enjoy its facilities. The bill also prohibits any individual from publishing information or advocating feelings of hatred against HIV-positive persons and those living with them.

However, certain aspects of the bill have received criticism. For instance, a press note released by the Lawyers Collective points to a lack of clarity about whether the new bill contains provisions for free or complete treatment of patients, which has been a longstanding concern for HIV-affected groups, as reported by The Ladies Finger, a feminist media portal, in October 2016.

The bill only said state governments would provide HIV treatment “as far as possible”--leaving much room for interpretation—and patient groups have been demanding that this be changed.