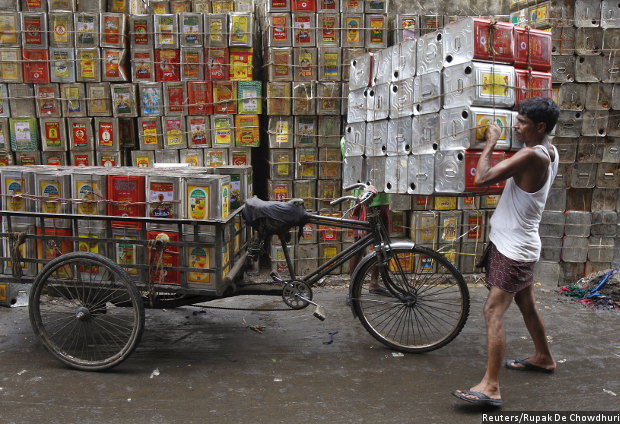 A man loads empty containers of edible oil onto a tricycle at a roadside in Kolkata. India’s edible oil imports more than doubled in the decade to 2015, according to ministry of consumer affairs data.

Pushed by the rising use of oil as a medium for cooking in rural areas and the falling production of oilseeds, India's edible oil imports more than doubled in the decade to 2015, according to ministry of consumer affairs data.

Consumption in rural households rose 40% and urban, 29% between 2004 and 2012, and oilseed production declined 7% between 2005 and 2012, according to a August 2015 report from the ministry's department of food and public distribution.

Source: Department of Food and Public Distribution, Ministry of Consumer Affairs. *According to news reports. 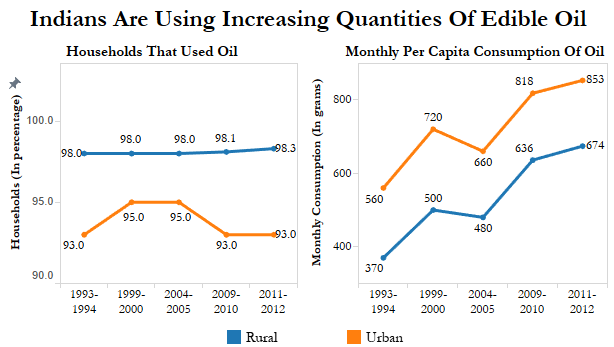 Indian use of edible oil has varied based on prices and availability, but demand appears uninterrupted, a likely consequence or rising population and growing prosperity.

“Growth has also been driven by government policies relating to oilseeds production, domestic processing and imports, all of which have affected the edible oil price and demand in the country," said this May 2016 report by ICRA, a management consultancy.

"With India’s population increasing from 541 million in 1971 to 1.02 billion in 2001, and to 1.28 billion at present; and per capita income growth rising throughout the last three decades, consumption growth in India has been almost uninterrupted till recently. Consumption growth has been variable in recent years, primarily because of sharply higher product prices.”

Edible oil is produced from oilseeds, and the department of food and public distribution report suggests that production of edible oil seeds fell by a million tonnes over a decade ending 2015.

Some reasons proffered for stagnant production of oilseeds:

As demand rises, imports are taxed to protect domestic manufacturers

Imports now account for two-thirds of the India's edible oil demand, which is unlikely to reduce as the population grows and incomes continue to increase. The consumer is likely to pay for taxes imposed on imports.

(Bhattacharyya is an intern with IndiaSpend.)