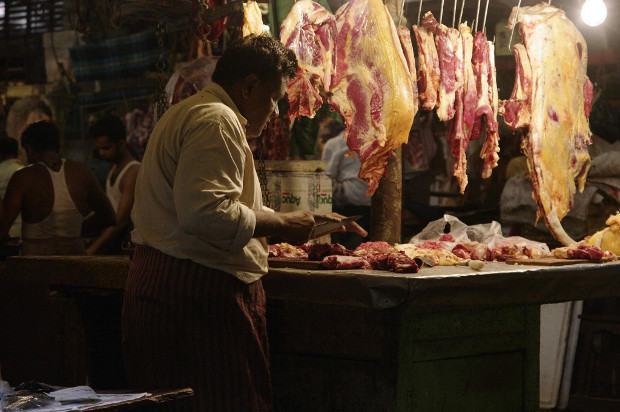 India's beef and buffalo consumption is rising--along with that of every other kind of meat--as a legal battle over Maharashtra's beef prohibition unfolds in the Bombay High Court and the state government mulls new bans on the slaughter of other animals.

Consumption of beef/buffalo meat grew by 14% in urban and 35% in rural India between 2004-05 and 2011-12, according to National Sample Survey Organisation (NSSO) data analysed by IndiaSpend.

Although poultry is the meat of choice, the consumption of other meats is also growing, as the table below shows:

Fish is the most consumed meat in India followed by chicken. The monthly per capita consumption of fish is up by 22% in urban India and 32% in rural India.

Rising consumption may not deter the Bharatiya Janata Party, now in power in 11 states and Delhi. "Cow slaughter cannot be allowed in this country," Home Minister Rajnath Singh said recently, "We will use all our might to ban it."

Rising incomes in India are related to the rising consumption of meat, as the graph below explains. Per capita income rose 55% over the same period, 2005-06 to 2010-11, that meat consumption rose in rural and urban India.

Growing incomes across India have led to a fall in consumption in coarse grain and a rise in consumption of protein and fat, although India greatly lags China and the US, as this study shows.

Despite the rising preference for non-vegetarian food, both in urban and rural India, the Maharashtra government on April 6, 2015, told the Bombay High Court that it would now consider a ban on other meat in addition to beef.

When Maharashtra advocate general Sunil Manohar told Justices V.M. Kanade and A. R. Joshi that the beef ban, under the new Maharashtra Animal Preservation (Amendment) Act, was primarily aimed at preventing cruelty to animals, Justice Kanade asked: "What about other animals like (sic) goat?"

Manohar replied: "This is just the beginning. We may consider banning slaughter of other animals."

Justice Kanade joked: "This may lead to a migration from (the) state. Don't ban fish though."

Chicken is the most-consumed meat followed by fish and mutton in the state of Maharashtra.

Update: This story has been updated to reflect the rise in incomes across India and its link to growing meat consumption.