Indian Banks Do The Long March 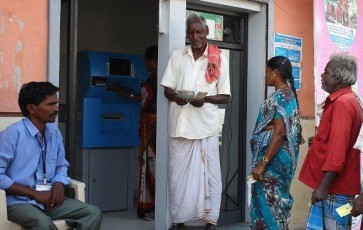 India may lag China which is now claiming almost total banking services coverage of all 1 million villages in the country. But banking has now reached over 74,000 villages in India with a population of over 2,000. This takes the total number of banking outlets to 147,354, while the number of no-frills accounts has gone up from 49 million to 103 million in just two years.

The next target: all 348,000 villages with a population of over 1,000 by March 2013. That might be a stretch; or it may not. In the past, the Reserve Bank of India (RBI) and the Finance Ministry have on several occasions stressed the importance of banking services in villages. It is estimated that 480 million Indians do not have access to banking. The process got a kick-start in November 2009 when all banks were advised to formulate a strategy to provide rural banking in every village which has a population of 2,000 people.

A minimum of 4 banking products were to be ensured through a strong Information Communication Technology (ICT) platform and through Business Correspondents (BC). Surely a daunting task if you take the fact that 72,800 villages with a population of about 2,000 should have access to banking by March 2012 and all 348,000 villages with the population above 1000 by March 2013.

The RBI, early this month provided a progress update on its financial inclusion efforts.

There are a large number of outlets which have opened through Business Correspondents.

No Of Outlets Opened Through Business Correspondents

Number of BC agents

The number of bank accounts that have opened in the last two years has also increased.

No Of Bank Accounts Opened In Last 2 Years

All types of bank accounts have increased over the last two years. Moreover, accounts through ICT and BC have increased manifold which suggest that the outreach strategy has been successful.

So How Many Villages Are Covered?

The roadmap was to open banking outlets in 74,414 villages by March 2012. Let’s see what happened;

No Of Villages Covered

There is a minor shortfall of 215 villages. Meanwhile, Regional Rural Banks have opened outlets in all the 22,852 villages that were assigned to them. However, going by reports of a target of 348,000 villages (population over 1000) are planned to be covered by March 2013 then there is little time to lose. And miles to go.

Business Correspondents: They create awareness about savings and other products; provide education and advice on managing money and debt counselling. They identify potential customers, collect and process various forms for deposits.

As per RBI Guidelines; NGOs, Self Help Groups, Public Call Office (PCO) operators etc are eligible to be a Business Correspondent