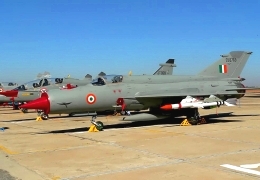 India’s air force has a fairly high casualty rate, most of it not in combat. A total of 66 defence personnel and 6 civilians have died between 2009-10 and 2012 due to plane crashes.

The total number of aircraft crashes includes mostly MIG 21s, which were inducted in the Indian Air Force in 1963 and MI Helicopters. MIG 21s were first produced in erstwhile Soviet Russia in 1959, and India took to MIG production in 1985.

Most crashes happened in the cities of Gwalior, Jodhpur and Hashimara with four crashes from each of these air force bases. 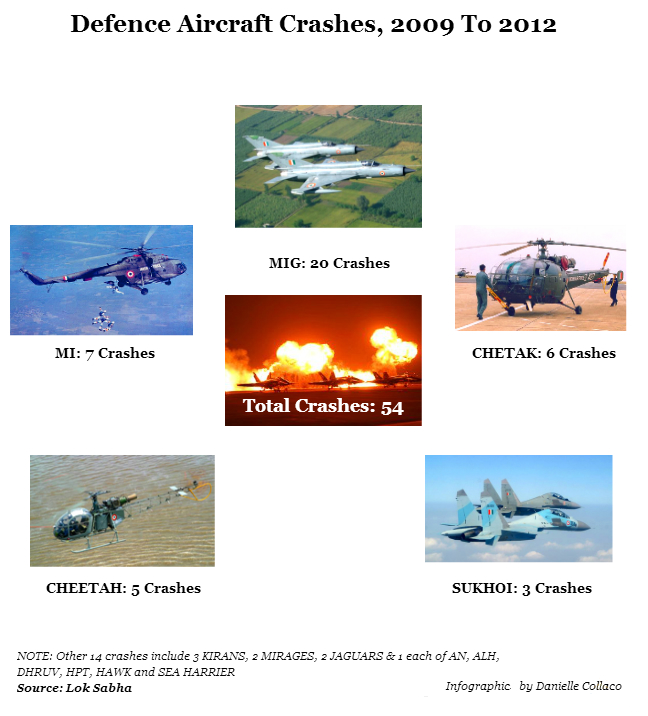 We see that MIGs (around 20 aircraft including 12 MIG21s) suffered the most crashes. MI helicopters (produced by Mil Moscow Helicopter Plant), which have seen a total of 7 crashes, are also designed by erstwhile Soviet Russia.

Chetak and Cheetah helicopters, which have suffered 6 and 5 crashes, respectively, are indigenously manufactured by Hindustan Aeronautics Limited (HAL). Next in line are Sukhois and Kiran jets - both had 3 crashes each. These aircrafts are also manufactured by Russia and HAL.

MIG aircrafts have been used by India for the last 40 years, and will be in use till 2018 when the new breed of Light Combat Aircraft (LCA) Tejas is commissioned. Incidentally, the planning for Tejas, which are meant to replace the MIGs, started in the 1980s, and Defence Minister AK Antony has set the new deadline of December2014. Presently, there are around 252 MIG 21s still operational in the Indian Air Force.

MIGs are currently manufactured by HAL and the maintenance is also done by HAL. Recently, a former Air Force employee petitioned the Delhi High Court, alleging that crashes take place due to poor maintenance by HAL.

Chetak and Cheetah are also manufactured by HAL, and these indigenous helicopters are allegedly past the prime of their usage...