India To Become 2-4? C Warmer, But Heat Deaths Are Preventable 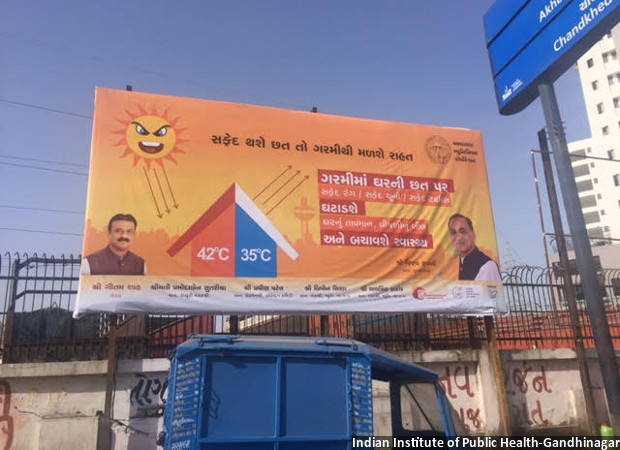 Through hoardings, the Ahmedabad Municipal Corporation is spreading awareness about heatstroke preventative measures, such as staying indoors, covering the head with a cap or wet cloth and taking rest during the hottest hours of the day and after exertion. This hoarding informs people about the usefulness of painting a roof white, it can reduce the indoor temperature by upto 7 degrees Centigrade.

Scientists who studied India’s 2015 heatwave, which claimed 2500 lives (over 1700 in Andhra Pradesh alone), concluded that the region was likely to see intense heatwaves once in every 10 years instead of once in every 100 years.

The next year turned out to be India’s hottest ever, since record-keeping began in 1901. In 2016, temperatures rose 0.91 degrees C above the 1961-1990 average. And earlier in 2017, summer got off to an unprecedented intense start, as heatwaves in late March swept through nine states: Chattisgarh, Gujarat, Haryana, Jharkhand, Madhya Pradesh, Maharashtra, Odisha, Rajasthan and Uttar Pradesh.

With 13 of India’s 15 hottest years on record occurring since 2002, intense heat appears to be the new normal. US President Donald Trump dismisses global warming as a hoax, a money-making industry, and a concept created by and for the Chinese in order to make US manufacturing non-competitive and has now pulled his country out of the Paris Climate Agreement.

But India simply cannot afford to ignore the new health and livelihood challenges global warming will present to “people who are no strangers to warm weather but who will now face more severe heatwaves intensified by climate change”, as Dileep Mavalankar, 59, director of the Indian Institute of Public Health, India’s first public health university in Gandhinagar, Gujarat, told IndiaSpend. 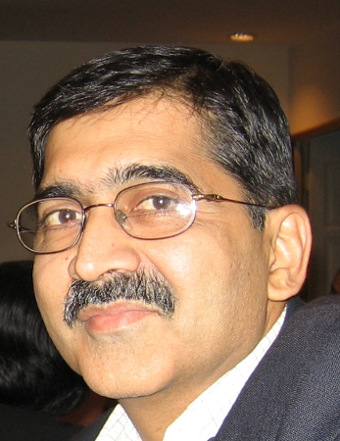 If heatwaves are perceived as a disaster-like situation with the potential to kill thousands, heat deaths are preventable. In 2016, the Indian Meteorological Department expanded heatwave forecasts to over 300 cities and in February 2017 launched an early heat “outlook”. The National Disaster Management Authority has issued revised national guidelines and television advertisements in local languages. And in 2014, the Ahmedabad Municipal Corporation pioneered South Asia’s first Heat Action Plan, as IndiaSpend reported on May 31, 2017.

“Combining public education, extreme heat warnings and efforts to safeguard the most vulnerable populations is proving to be a good template for other cities and states to follow,” said Mavalankar of the Heat Action Plan that his colleagues and the Natural Resources Defense Council are supporting. The interview:

Q: About 2,500 Indians are believed to have died in the intense heatwave of 2015 while 700 are believed to have succumbed to heat across the country in 2016, India’s hottest year ever. How reliable are heatstroke mortality figures in the media, and why do these fluctuate so much from year to year?

Heatstroke is a very serious condition with the potential of brain damage, especially if the body gets heated to 42 degrees C. Immediate relief involves cooling the body as fast as possible by cold sponging and cold compresses, spraying cold water on the body and if the victim is conscious, getting him/her to swallow some cold water. If this is not done, the mortality rate in an established case of heatstroke can be as high as 30-50%.

Heatwave fatalities are not at all well documented in India. The fatality numbers that the civil administration releases to the media are well below the actual number of people who succumb to excessive heat. One reason for this is death recording in our country is far from perfect. People who have not been directly exposed to the sun but have been exposed to high ambient temperature can also suffer heatstroke. Indirect heatstroke deaths happen when, say, heat precipitates heart failure in those with a cardiac condition. Such heat-triggered conditions which mostly happen in old and vulnerable people are technically called non-exertional heatstrokes, and are estimated to be ten times the number of exertional (or direct) heatstroke deaths but they are usually not recorded so. Newborns, infants, the elderly and people with chronic lifestyle diseases are the most vulnerable to the indirect effect of heat.

For instance, in Ahmedabad, where we have studied the number and cause of fatalities in detail, we know that about 100 people die of all causes on any given day in summer. During the heatwave of 2010, the city’s five municipal hospitals attributed 65 fatalities to heatstroke during the week of the heatwave. But we estimated that the heat caused 800 additional deaths in that week, which is over ten times the number of direct deaths attributed to the intense heat. Essentially, excessive heat can cause death directly and indirectly, but usually only the direct deaths, which happen in those who have been directly exposed to heat and present with easily recognisable symptoms get recorded as heatstroke fatalities. Such underreporting of heatstroke cases is common, it happens even in Europe and USA.

Q: The initiative of the Ahmedabad Municipal Corporation, which you are supporting and guiding, combines measures to prevent heatstroke and strengthen public-health responses to heatstroke victims. Through hoardings, the corporation is spreading awareness about preventative measures, such as staying indoors, covering the head with a cap or wet cloth and taking rest during the hottest hours of the day and after exertion. Preventative action also includes establishing an early warning system involving alerts issued through the media. However, of what use is it to tell poor people to take shelter, when they may be living on the road with no resources to protect themselves?

We are aware that the urban poor are extremely vulnerable to heatstroke. In Ahmedabad, we proposed that municipal gardens be kept open between 11am and 5pm, a time when they usually remain closed to the public, with the idea that homeless people and working class people with jobs in their vicinity would find shade and a place to rest under trees. For the same reason, we requested the administration to keep the city’s 45 night shelters open during the day. On our advice, the mayor of Ahmedabad called a meeting of representatives of religious and non religious non-governmental agencies and requested them to create and maintain “pyaus”, free drinking water facilities. Over 900 water facilities were created as a result. Another initiative driven by the mayor was the distribution of gunny bags and other packing material sourced from traders to residents of tin-roofed houses in slums. The mayor also asked paint companies to donate white paint to coat the roof of poor people’s houses. White-painted roofs reflect more sunlight, which helps keep interiors cool. Of the 3,000 roofs targeted to be painted, 2,800 roofs were actually painted, with the first roof being painted by mayor and other office bearers of the corporation with community youth. 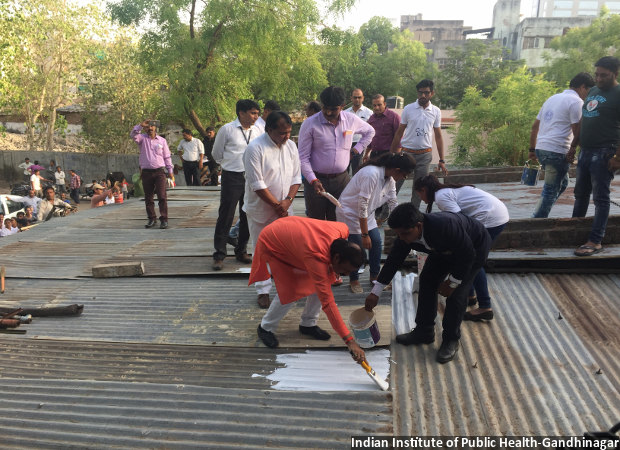 In 2014, the Ahmedabad Municipal Corporation pioneered South Asia’s first Heat Action Plan, which among other measures included an initiative to ask paint companies to donate white paint to coat the roof of poor people’s houses. White-painted roofs reflect more sunlight, which helps keep interiors cool. Of the 3,000 roofs targeted to be painted, 2,800 roofs have actually been painted, with the first roof being painted by the mayor Gautam Shah (in orange) and other office bearers of the corporation with community youth.

The municipality has not accepted some of our suggestions, such as our request to supply extra water during heatwaves. A lot of municipalities across India supply extra water during religious festivals, and we believe it is even more important to supply extra water at a time when people need it to protect their health. We also proposed that the municipality should not issue major work contracts after April. Essentially, city roads and other improvement projects should start after the monsoon and continue through winter up to April when the weather is conducive. A ban on digging during the monsoon already exists. To protect construction site workers from continuous heat exposure, we proposed that labour contractors be asked to employ workers in split shifts, such as from 6am to 11am and from 5pm to 8pm. It helps to rest during the hottest hours of the day. We were told this is impractical to implement.

Q: Densely populated areas are said to be generally hotter than rural areas. What temperature difference have you recorded between rural areas and urban areas? Why does this happen, and does it mean that heatstrokes and heat-induced deaths are more likely to happen in urban areas?

In summer, we have found that Ahmedabad records temperatures that are usually 2-3 degrees Centigrade higher, even up to 4 degrees Centigrade higher than the surrounding areas because of the urban heat island effect, a phenomenon whereby concrete buildings and traffic enclose the heat in a limited space. Rural areas around the city with more vegetation and water bodies see lower temperatures. However, the majority of residents of urban areas spend less time outdoors and have more resources and utilities (such as water, cooling devices, hospitals) to rely on for their wellbeing. Heat fatalities can happen both in urban as well as rural areas. We are focused on urban areas as growing urban populations are exposing more people to higher temperatures, albeit the warning initiative of the Indian Meteorological Department is meant for everyone. Recently, we have also started pilot testing a heat action plan for rural blocks of Rajasthan with the help of Unicef.

In Ahmedabad, the average number of people affected by heatstroke reduced from 265 (in 2010) over a season to 65, after the Heat Action Plan was introduced in 2014, which is a significant drop. To improve upon this outcome, we would need to intensify our efforts so as to spread the message and give protective advice to a greater number of vulnerable people. There will always be those who do not take our messaging seriously, those who suffer a heatstroke and consult a doctor too late. A big drawback to addressing heatstroke in India is the absence of environmental health as a subject in the public sector, which is as it is weak in the health segment. We need a two-pronged effort to adequately address health issues posed by the climate and other environmental elements such as the water and air, through the health sector and the environment sector. But India has an acute paucity of environmental health experts. Nor are existing health practitioners being adequately trained to address environment-triggered health conditions.

Q: This year Mumbai saw a rise in cases of chickenpox and eczema during summer. Apart from the obvious dehydration and heatstroke, what other diseases can heatwave cause? Why does this happen and are such spurts in associated diseases preventable?

Skin diseases of fungal origin can get exacerbated in the heat due to excessive sweating. Intense heat can also cause greater mental distress, expressions of anger and violent behaviour. Newborns and the elderly are the most vulnerable to heat, and can suffer greatly from the indirect effects of heat. Of late we have been hearing of an increase in cases of chronic kidney disease of unknown origin, which we assume is triggered by heat and dehydration but this needs greater investigation. Outside cities, farmers are extremely vulnerable to heat as are armed service personnel who spend hours in confined spaces such as tanks and bunkers in hot parts of Rajasthan and Gujarat. With climate change upon us, it will become more challenging to address heatstroke. It is imperative that the nation starts to prepare in earnest for the future when temperatures will increase by 2-4 degrees C.