India Skips 6 Of 16 Key WHO Recommendations on TB 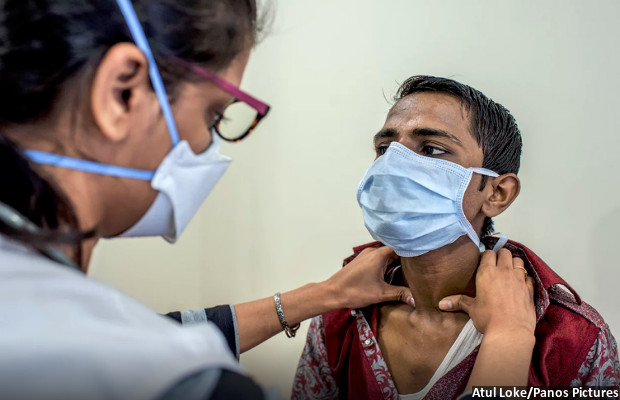 India does not implement six out of the 16 key World Health Organisation (WHO)- recommended tuberculosis (TB) control policies in diagnosis, patient care and treatment, a new global report has found.

Four other policies that are a part of the national policy are not being fully implemented.

These were the findings of the third edition of ‘Out of Step’, a report published by Médecins Sans Frontières (MSF) and Stop TB Partnership. The study reviews TB policies and practices in 29 countries which account for 82% of the global TB burden.

Government sources told IndiaSpend that India may implement three of the neglected recommendations by 2017 end.

India has the highest burden of TB in the world, with over 2.8 million patients reported in 2015. Although TB is preventable and treatable, it remains the world’s deadliest infectious disease. In 2015 alone, TB killed 1.8 million people.

Diagnosis and drug-resistant treatment are the two critical areas where the Indian national tuberculosis policy has yet to align with WHO recommendations.

India still has not made Xpert MTB/RIF the initial test for TB in adults and children. This is a rapid molecular test to diagnose TB and test for resistance to first-line drugs to deal with the disease.

Sputum smear microscopy still remains the primary detection test. It is inexpensive and easy to conduct but not the most sensitive test available for TB. Further, in HIV positive patients it has a poor rate of detection of TB as discussed in a later section.

“The benefit of GeneXpert (the brand name for Xpert MTB/RIF) outweighs the cost,” said Dr Nerges Mistry, director, Foundation of Medical Research, Mumbai. “The cost of detecting multidrug-resistant TB (MDR TB) late is much more than the cost incurred in conducting the test.”

The government seemed to be underplaying the threat of MDR TB, she added. “Even though the government says the incidence of MDR TB is 1.8% in new TB cases and 18-20% in retreatment cases, many studies show that it is as high as 18-20% and 28-30% respectively,” she said.

NOTE: Government does not report new smear-negative TB cases; **includes patients who completed treatment and patients who were cured; *TB Patients who did not relapse after one year of completing treatment

"GeneXpert as a diagnostic test has been validated universally. Although the RNTCP has added one GeneXpert per district in the country, the utilisation rates still remain low overall" said Stobdan Kalon, MSF India’s medical coordinator.

Not enough to detect drug-resistant TB

Two of the strongest, first-line TB drugs in the market are rifampicin and isoniazid. Patients who are resistant to the first usually do not respond to the second drug either. But in India, most rifampicin-resistant patients are not put through the first-line drug susceptibility test (DST) that could diagnose isoniazid resistance as well.

Patients who are resistant to both these drugs are said to have multi-drug resistant tuberculosis. A DST could thus help customise treatment for such patients.

India had 130,000 multi-drug resistant TB patients in 2015, the highest in the world. Yet there are just 67 labs offering DST across the country. As a result, TB patients waste years being treated with drugs that don’t work for them, suffer from side-effects, waste money and also increase chances of spreading the infection.

India’s national TB policy does not reflect the shorter, WHO-recommended nine-month MDR TB regimen, says the report. Patients with MDR TB are currently on a 24-month treatment but this might change by the end of 2017.

“The shorter MDR-TB regimen will be scaled up across the country by end of 2017 for all RR-TB (rifampicin resistant) patients,” according to the National Strategic Plan for Tuberculosis Elimination 2017-2025 published in February 2017 by the Revised National Tuberculosis Control Program (RNTCP), India’s national TB control programme.

After a span of over 40 years, two new TB drugs—Janssen’s Bedaquiline and Otsuka’s Delamanid -- came into use. Bedaquiline was approved by the US Food and Drug Administration in 2012 and Delamanid, by the European Medicines Agency in 2014.

Even though the WHO had released its policy on the usage of Delamanid for treating extensive drug resistant (XDR) TB cases in 2015, it is not part of India’s national TB control efforts. There are new reports that Otsuka is planning to approach Drug Controller General of India for approval.

However, India has included Bedaquiline in the national TB control programme, under “conditional access”, available at six locations to 600 patients who fit the criteria.

Access to the drug is still not easy. In January 2017, a 18-year-old XDR TB patient from Patna being treated at a Delhi hospital had to move the Delhi High Court for access to Bedaquiline. She was denied the drug in Delhi since she was not living in the city.

HIV not only increases the risk of TB but also its morbidity and mortality. HIV positive patients with latent TB are 26 times more likely to get active TB. In 2015, 40,000 HIV-positive people died due to TB.

However, it is not easy to detect TB in HIV patients -- in 50% of cases, HIV TB patients are smear negative. WHO recommends TB LAM, a urine test that can rapidly detect cases of TB in HIV positive patients, especially those who are seriously ill or living with low CD4 count (cells that are killed by HIV and shows the progression of disease).

India also does not use TB LAM to diagnose TB in persons living with HIV/AIDS with CD4 count less than 100 µL or who are seriously ill, reported Out of Step.

No pediatric fixed drug combination yet for children

Every year over 1 million children are detected with TB and 140,000 die of it. Drug doses for children and adults differ and WHO had recommended a fixed dosed combination of drugs for children in 2012. But in its absence, children are given adult medicines that are crushed or cut, with the danger of improper dosage.

Yet, India doesn’t implement pediatric fixed drug combinations as standard of care in all parts of the country even though it is a part of the national guidelines, said the ‘Out of Step’ report.

Sunil Khaparde, deputy director general of India’s Central TB division refused to comment on the report. “It is not necessary for the government to respond to every report brought out by nonprofits,” he said.

Another doctor working in the TB division, who was not authorized to speak to media and hence remains unnamed, said that India is already going to roll out three of the six unimplemented recommendations.

Update: A quote in this story about TrueNAAT has been modified on the request of Medecins Sans Frontieres.