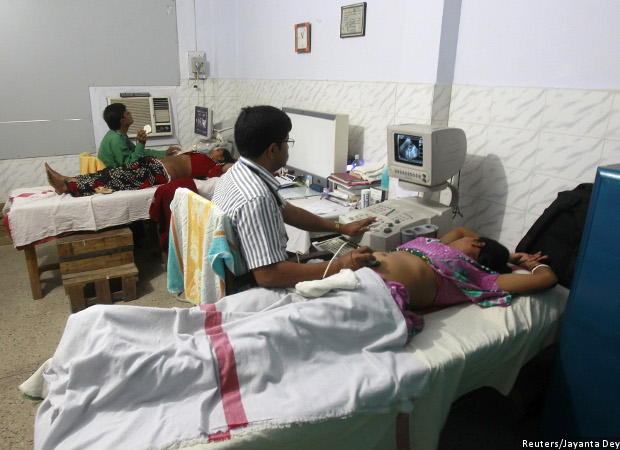 In Odisha, a man slung his wife's body over his shoulder and carried it 10 km after being denied an ambulance on August 24, 2016.

In Kanpur, Uttar Pradesh, a man's sick son died on his shoulder after being denied admission to a Kanpur hospital on August 29, 2016.

Such cases become visible when they get social media and television attention, but millions cannot access India's overburdened hospitals and inadequate medical facilities, a crisis illustrated by the fact that India is short of nearly 500,000 doctors, based on the World Health Organization (WHO) norm of 1: 1,000 population, according to an IndiaSpend analysis of government data.

With more than 740,000 active doctors at the end of 2014--a claimed doctor-patient population ratio of 1:1,674, worse than Vietnam, Algeria and Pakistan--the doctor shortage was one of the health-management failures cited by this report of a parliamentary committee on health and family welfare, which presented its findings to both houses of parliament on March 8, 2016.

Illegal capitation fees in private medical colleges, a health-services inequality between urban and rural India and a disconnect between the public-health and medical-education systems were among the issues the committee investigated while probing the Medical Council of India,, the 82-year-old organisation responsible for medical-education standards.

Up to 55% of India's 55,000 doctors graduate every year from private colleges, many of which charge illegal donations, or "capitation fees"; in Tamil Nadu, it now costs a medical student from such a college Rs 2 crore to get a Bachelor of Medicine and Bachelor of Surgery (MBBS) degree, Times Of India reported on August 26, 2016.

These medical-education imbalances reflect larger public-healthcare issues. In general, poverty is correlated with the lack of healthcare. For instance, among states with the highest proportion of undernourished children, Jharkhand and Chhattisgarh have the worst infrastructure for institutional deliveries.

"However, the committee has been informed... that doctors cannot be produced overnight, and if we add 100 medical colleges every year for the next five years, only by the year 2029 will the country have adequate (sic) number of doctors," the second expert said.

“An expert who appeared before the committee submitted that India was very very short of doctors and to meet this shortfall, India needs to have not four hundred, but one thousand medical colleges,” the report said.

The central government has approved 22 medical colleges with 1,765 seats in the last two years, according to an e-book published by the ministry of health and family welfare.

While 11 new All India Institutes of Medical Sciences (AIIMS) have been added with 1,100 seats, the government has proposed an additional 4,700 MBBS seats.

As many as 5,540 MBBS seats and 1,004 PG seats have been added in the last two academic sessions, the e-book said.

Medical-education shortages manifest themselves in under-staffed public-health services nationwide: There is an 83% shortage of specialist medical professionals in community health centres (CHCs), as IndiaSpend reported in September 2015.

Public-health centres across India’s rural areas–25,308 in 29 states and seven union territories–are short of more than 3,000 doctors, the scarcity rising 200% (or tripling) over 10 years, IndiaSpend reported in February 2016.

The committee was, thus, skeptical of the government's claims of the doctor-population ratio.

"Given the fact that the Indian Medical Register is not a live database and contains names of doctors who may have passed away or retired from active practice, by now, as well as those with a permanent address outside India and that there is no mechanism in place for filtering out such cases, the Committee is highly sceptical of the Ministry’s claim of having one doctor per 1,674 population," the parliamentary report said. "In view of the above, the Committee feels that the total universe of doctors in India is much smaller than the official figure, and we may have one doctor per 2,000 population, if not more."