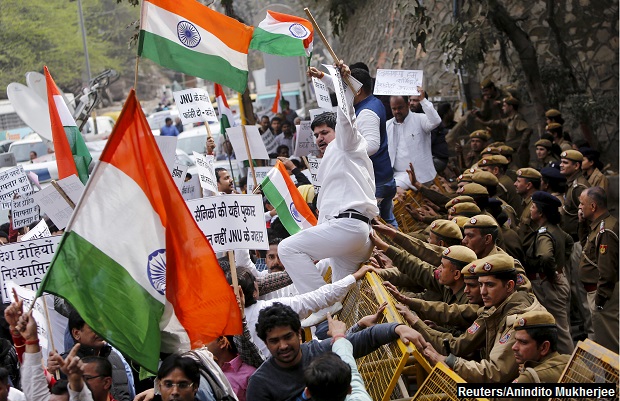 Police stop demonstrators during a protest against the students of Jawaharlal Nehru University (JNU) outside the university campus in New Delhi, on 15 February, 2016. The University's Students' Union President Kanhaiya Kumar was remanded to judicial custody for 14 days after being charged under India's 156-year-old, colonial-era sedition law.

Among the countries that hold on to sedition as a criminal act: Saudi Arabia, Malaysia, Iran, Uzbekistan, Sudan, Senegal and Turkey, as this report pointed out. The US also has a sedition law, promulgated 218 years ago but with many parts struck down over two centuries. Germany keeps a sedition law on its books largely because of post-Nazi sensitivities.

Kumar was remanded to judicial custody for 14 days--amid violence within and outside a Delhi court room--after being booked for sedition under section 124A of the Indian Penal Code (IPC), which does not actually use the word "sedition".

"It is only found as a marginal note to Section 124A, and is not an operative part of the section but merely provides the name by which the crime defined in the section will be known," according to this paper.

Sedition in India not unconstitutional: 47 cases in 2014

As many as 47 sedition cases were reported in 2014 across nine Indian states, according to this National Crime Records Bureau (NCRB) report.

In recent years, those arrested on sedition charges include a cartoonist, students cheering Pakistan in a cricket match, a Gujarati caste-group leader, and a Kerala man for a Facebook post. Most of those charged were not violent or had not incited violence, a legal pre-requisite for a sedition charge.

“When a person is dubbed “anti-Indian”, it is distasteful to India’s citizenry, but then to be “anti-Indian” is not a criminal offence, and it is definitely not “sedition”. (It only means that you are a freak, and that it is high time to have your head examined!),” Nariman wrote.

Yet, sedition was widely used by Indian state governments in 2014.

72% of all India's sedition cases from Jharkhand and Bihar

Jharkhand and Bihar accounted for 72% of the total sedition cases in 2014.

As many as 58 people--55 men and three women--were arrested for sedition.

The NCRB included data on ‘Offences Against the State’ for the first time in 2014.

‘Offences Against the State’ have been classified largely under two categories: Offences against state (under sections 121, 121A, 122, 123 & 124A IPC) and offences promoting enmity between different groups (under sections 153A & 153 B IPC).

Others, with 129 cases, accounted for 73% of the total cases under Offences against state.

About 872 people were arrested--865 males and seven females--under these crimes.

As many as 323 cases were reported under section 153A of the IPC for promoting enmity between different groups on ground of religion, race, place of birth, etc. Kerala reported the most—59.

Maharashtra reported the most arrests—204--for Offences Against the State, followed by Kerala (98), Meghalaya (67), Karnataka (63), and West Bengal (59). These top five states account for 56% of the total arrests across India.

The United Kingdom abolished the sedition law in 2009. Britain’s Law Commission had recommended the abolition of the law in 1977.

“Abolishing these offences will allow the UK to take a lead in challenging similar laws in other countries, where they are used to suppress free speech," Claire Ward, Britain’s former Parliamentary Under Secretary of State at the Ministry of Justice, said while abolishing the law.

Scotland followed in 2010. South Korea did away with its sedition laws during legal and democratic reforms in 1988.

In 2007, Indonesia declared sedition as "unconstitutional", saying it had been derived from its colonial Dutch masters.

In contrast, in October 2015, the Malaysian federal court dismissed a challenge to its colonial-era sedition law--with the same origin as India's--often used to quell political opposition.