India Ranked 7 Among Countries Hit Most By Terror 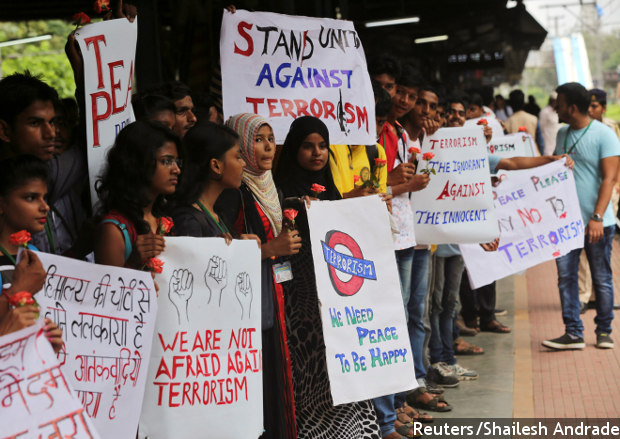 College students hold placards during a rally to condemn terrorism at a railway platform in Mumbai. India is one of six Asian countries ranked in the top ten nations most impacted by terrorism. As many as 797 terrorist attacks were recorded in India in 2015, up 4% since 2014.

India was ranked seventh in the list of countries most impacted by terrorism in 2015, according to the Global Terrorism Index (GTI), 2016, released by the Institute for Economics & Peace, a think-tank based in Sydney, Australia.

India is one of six Asian countries ranked in the top ten nations most impacted by terrorism. The Heart of Asia conference adopted the Amritsar declaration on December 4, 2016, which recognises "terrorism, violent extremism, radicalization, separatism, and sectarianism and linkages among them" as the gravest challenges facing the region.

The declaration voiced particular concern about the “high level of violence” by ISIS and its affiliates, the Haqqani Network, al Qaeda, Lashkar-e-Taiba, Jaish-e-Mohammad and Tehreek-e-Taliban Pakistan; all based in South Asia.

India recorded 289 terrorism-related deaths in 2015, a 45% decline over 2014. However, the number of Indian Army and paramilitary soldiers killed this year is at an eight-year high, IndiaSpend reported on November 29, 2016.

While the 2015 attacks were the highest since 2000, 80% were non-lethal. Overall, 49 different terrorist groups were engaged in attacks but 31 of these failed to kill anyone.

“This suggests that groups are seeking to remind governments of their presence without provoking significant military reactions,” the report said.

The GTI score for a country is calculated based on weightage assigned to the total number of terrorist incidents, fatalities, injuries and property damage sustained in the year in question. The index also takes into consideration attacks which took place in the four previous years. 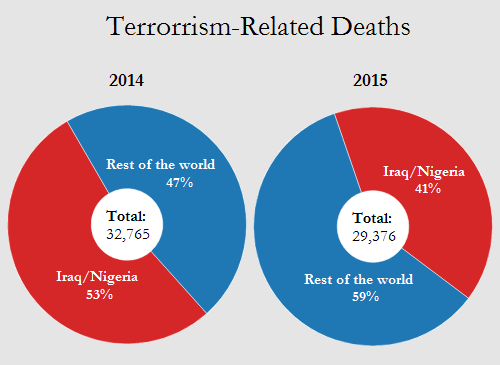 A 32% reduction in terror deaths in Iraq and Nigeria led to a global decline in deaths by 41% in 2015. Both countries accounted for 53% of all terrorism-related deaths across the world in 2014.

The global economic impact of terrorism has been $635 billion over 16 years, from 2000 to 2015. That is an amount equivalent to the annual gross domestic product (GDP) of Egypt and Malaysia.

The Organisation for Economic Co-operation and Development (OECD) countries--the world’s most developed--witnessed a 650% increase in terrorism deaths, from 77 in 2014 to 577 in 2015, the worst year for the 35-nation bloc since the 2001 September 11 attacks.

Turkey, a part of OECD, witnessed 337 deaths in 2015, the highest among OECD countries. Terrorist violence in Turkey rose from attacks by the separatist Kurdistan Worker’s Party (PKK) and ISIS in 2015.

The report notes that for 14 years until the start of 2015, France had averaged one terrorism-related death per annum. In 2015, France recorded 161 deaths, making it the second biggest victim of terrorism in the developed world. This includes the November 2015 Paris attacks that killed 136 and the Charlie Hebdo attack in January.

Over half of all attacks in the OECD countries were by or inspired by ISIS, a trend which has continued in 2016 with attacks in Brussels, Istanbul, Nice and Orlando, which have killed 211 people. 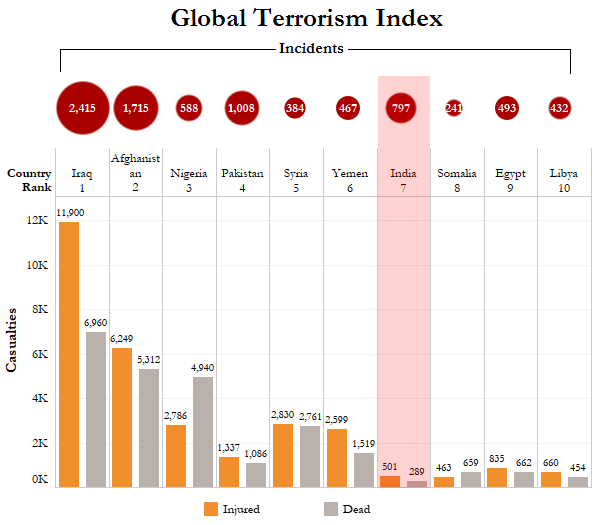 The GTI score is based on the relative impact of terrorist incidents by accounting for the number of incidents, fatalities, injuries and total property damage.

Pakistan is ranked fourth with 1,086 deaths in 2015, a 38% decline since 2014. The report notes that terrorism in Pakistan “has moved from the border region with Afghanistan” to other parts of the country, “especially in the Punjab province”, which borders India.

Terrorism has cost Pakistan $118 billion over the last 15 years in direct and indirect costs, according to Pakistan’s Economic Survey 2015-16, IndiaSpend reported in August 2016.

ISIS overtook its African affiliate Boko Haram as the world’s deadliest terrorist group in 2015, with attacks causing 6,141 deaths. ISIS expanded the number of countries where it conducted attacks from six in 2014 to 11 in 2015.

As many as 4,502 people were killed in terrorist attacks by the Taliban in Afghanistan in 2015, a 29% increase since 2014. The year 2015 was also the deadliest for terrorism in Afghanistan, even as the Afghan security forces struggle to contain a resurgent Taliban and the United States draws down its troop presence in the country.

The increased violence in Afghanistan threatens the $2 billion worth of Indian aid to the country in a bid to stabilise Afghanistan’s civilian leadership, IndiaSpend reported in July 2015.