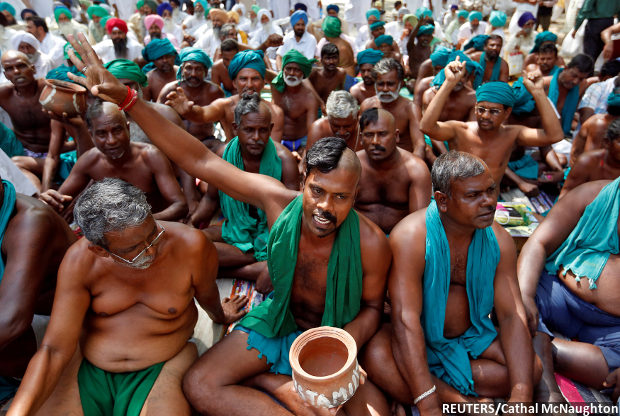 Farmers from the southern state of Tamil Nadu pose half shaved during a protest to press for their demands from the federal government, in New Delhi.

A waiver of this scale could pay for the 2017 rural roads budget 16 times over or pay for 443,000 warehouses or increase India’s irrigation potential by 55% more than the achievements of the last 60 years.

Small & Marginal Farmers In The State

While such waivers could provide succour for 32.8 million indebted farmers, an IndiaSpend analysis of the impact of previous farm-loan waivers indicates such bailouts are band-aids of uncertain efficacy and do not address a deeper malaise gripping India’s agrarian economy.

The waivers were primarily meant to discourage suicides by farmers, apparently caused by widespread indebtedness. However, our analysis shows this had little or no impact on suicide rates, probably because 32.5% on average, or 79.38 million, small and marginal farmers across India (with farm holdings of less than 1 to 2 hectares in size) rely on informal sources of credit.

Meanwhile, loan waivers have led to a rise in the non-performing assets of banks, especially public-sector banks, and are likely to have a significant bearing on the state and national fiscal deficits. In 2013, agricultural non performing assets (NPAs) accounted for about 41.8% of “priority sector”--which also comprises micro and small enterprises, affordable housing, and student loans--NPAs in public and private banks--up from 25% in 2009, according to a 2015 study on NPAs in priority-sector lending in India’s public and private banks, published in the International Journal of Science and Research (IJSR).

For example, Maharashtra’s Rs 30,000 crore farm-loan waiver for small and marginal farmers will raise the state’s fiscal deficit to 2.71%, which is three-fourths (1.18 percentage points) higher than the budgeted deficit of 1.53% of the gross state domestic product (GSDP) for the current financial year, according to this 2017 report by ratings agency India Ratings and Research (Ind-Ra). Uttar Pradesh’s Rs 36,359 crore farm-loan is 2.6% of its GSDP, estimated the agency quoted in Mint in April, 2017 The 14th Finance Commission says fiscal deficits should not exceed 3% of state budgets.

About 85% of all operational farm holdings in India are less than two hectares in size, as IndiaSpend reported on June 8, 2017. Since 1951, the per capita availability of land has declined 70%, from 0.5 hectares to 0.15 hectares in 2011, and is likely to decline further, according to the latest available ministry of agriculture data.

Owners of these shrinking farms find it difficult to use modern machinery and are often too poor to afford farm equipment. Manual labour increases costs, and size and output further limits access to loans and institutional credit.

The other 22.1 million farmers depend on moneylenders and relatives for borrowings, according to the 2011 agricultural census and the National Sample Survey Office’s 2013 situation assessment survey of farm households, the latest available data.

A quarter of these suicides (4,238) were reported from Maharashtra. In 2009, the year after the loan-waiver was announced, the state government promised an additional waiver of Rs 6208 crores. This led to a drop in farm suicides in India’s richest state, by GDP; but in 2010, suicides rose again, by 6.2%. By 2015, seven years after the Centre’s bail-out, Maharashtra recorded 4,291 suicides, its highest rate ever, accounting for 34% of such deaths nationwide, according to the latest available NCRB data.

While loan-waivers provide no more than temporary relief, they place a significant burden on public finance and the economy and they “engender a moral hazard”, Reserve Bank of India governor Urjit Patel cautioned on April 6, 2017, echoing the arguments of financial experts who believe such bail-outs deter even capable farmers from honestly repaying their loans.

“Waivers undermine an honest credit culture... It leads to crowding-out of private borrowers as high government borrowing tend to (impose) an increasing cost of borrowing for others,” the RBI governor said, calling for a consensus among states on loan waiver promises. “Otherwise sub-sovereign fiscal challenges in this context could eventually affect the national balance sheet.”

Source: International Journal of Science and ResearchNote: In public and private sector banks

These NPAs affect the credibility of lending institutions. Shares of banks fell 4% after Maharashtra announced its loan waiver, Business Standard reported on June 13, 2017. Further, with public-sector banks (PSBs) accounting for the major share of farm credit--52% in Maharashtra, followed by 32% from co-operative banks and 12% in private banks--these PSBs are “more vulnerable”, said this 2017 Kotak Institutional Equities report.

Loan Waivers mean that money which could have gone to strengthening agricultural infrastructure will not have adequate funds.

Indebtedness is a symptom and not the root cause of the farm crisis, according to a 2007 expert group report on agricultural indebtedness, chaired by economist R Radhakrishna. The average farm household borrowing has not been “excessive”, the Radhakrishna report said. The factors contributing to the farm crisis are “stagnation in agriculture, increasing production and marketing risks, institutional vacuum and lack of alternative livelihood opportunities”, the report said.

More recently, others have emphasised this point (here, here and here): It is clear a loan-waiver alone cannot solve India’s agrarian crisis.

The data reveal a more-than-necessary focus on agricultural credit, as other fundamental problems remain unaddressed.

Roughly 7% of India’s total grain output, 10% of seeds and between 25% and 40% of fruits and vegetable--overall a third of farm harvest spoils--are wasted every year because there isn’t enough storage and supply-chain infrastructure, according to the 2015 IJSR paper.

Irrigation, increasingly vital in an era of climate change, has failed Indian farming. No more than 47.6% of India’s farms are irrigated, as IndiaSpend reported on June 8, 2017, and the decadal growth in net-irrigated area to 2010 was 0.3%, according to ministry of agriculture data.

To curb the impact of market fluctuations, this 2016 report by chief economic adviser Arvind Subramanian recommended improving the “procurement capacity”--or money available to buy farm produce--of states, lifting export bans, raising stock limits--which is how much produce traders can hold--and including “risks and externalities” while framing the minimum support prices (MSP) for various produce. For those commodities protected by the government’s MSP policy--these include fruits and vegetables--the Radhakrishna committee recommended a price-risk mitigation fund, which would allow to hedge losses in market fluctuations.

These investments, as agricultural economist M S Swaminathan pointed out in his tweet, require capital expenditure, which may now be hit by the recent decisions to waive farm loans. States are unlikely to get help from the Centre this time, as finance minister Arun Jaitley indicated on June 13, 2017.

“States which want to go in for these kind of schemes (farm-loan waivers) will have to generate them from their own resources,” said Jaitley. “Beyond that the central government has nothing more to say.”

Rs 3.1 lakh crore: How we calculated the comparisons

(Saldanha is an assistant editor and Salve is an analyst with IndiaSpend. With data inputs by Ojaswi Rao and Delna Abraham.)