India Less Violent Than 2016, But Less Peaceful Than Decade Ago 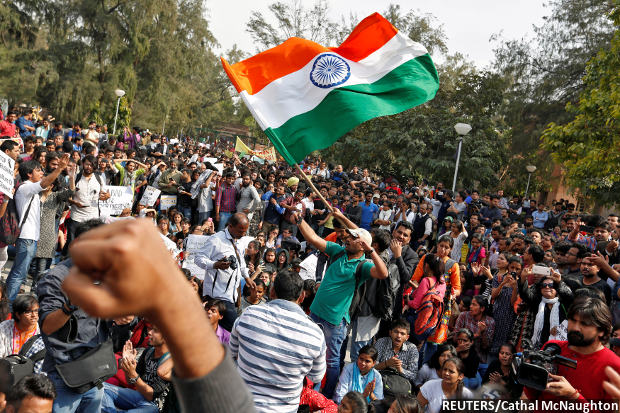 Reduction in violent crimes and increased law enforcement saw India improve its peace ranking by four positions from 2016, but it is less peaceful than it was a decade ago, according to the 2017 Global Peace Index (GPI), released by the Institute for Economics and Peace, a New York-based think tank that develops metrics to analyse peace.

India’s 2017 rank was 137 of 163 countries, moving up four positions from 141 in 2016. However, deaths due to external conflict have increased, the report said, specifically in relation to the conflict in Kashmir from mid-2016.

India is less peaceful than it was a decade ago, and it suffers from more violence than Brazil and South Africa, both countries wracked by violence.

The peace index is based on 23 indicators related to level of safety and security in society, the extent of domestic or international conflict, and the degree of militarisation.

The world has become slightly more peaceful in 2017, with an average 0.28% improvement in “peacefulness” since 2016.

The economic cost of violence

"Every $1 invested in peace-building can lead to $16 decline in the cost of armed conflict," the GPI report said.

India is 70th of 163 countries ranked on the basis of economic cost of violence as a percentage of GDP.

Civil war-hit Syria, which lost 67% of its GDP to violence, is ranked as the world’s most violent nation, followed by conflict-ridden Iraq (58%) and Afghanistan (52%). Switzerland is ranked 163.

Ten-year trend: Terrorism has worsened things in Pakistan and the world

The terrorism impact index calculation is based on a weighted average of the last five years of the number of fatalities, injuries and property damage caused by terrorism.

“The impact of terrorism increased dramatically over the last decade with the scores of 60% countries deteriorating," the report said.

"Deaths from terrorism in OECD countries increased over 900% between 2007 and 2016, with the largest increases occurring in Turkey, France, the United States, and Belgium," the report said.

Europe, in particular, has seen a spate of deadly attacks in recent years.