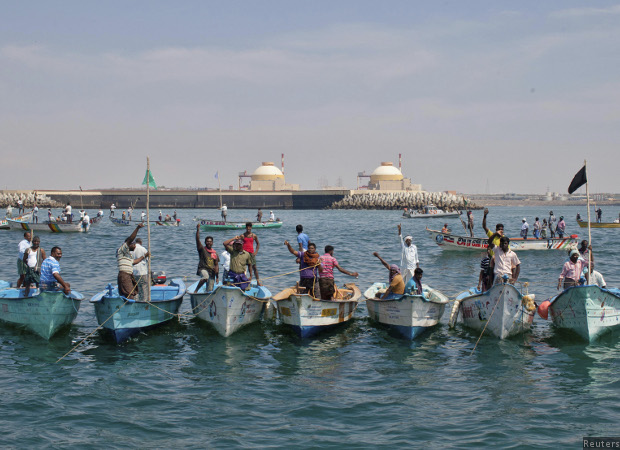 Demonstrators stand in their boats in the Bay of Bengal during a protest near the Kudankulam nuclear power project in the southern Indian state of Tamil Nadu October 8, 2012.

India has 222 listed conflicts--in proportion to population, there are many more--followed by Colombia and Nigeria with 116 and 71 conflicts, respectively, according to the EJAtlas, an interactive map of 1,703 global ecological conflicts, categorised by cause, such as water management, waste management, fossil fuels and climate justice, and biodiversity conservation.

With India currently facing the worst crisis in a decade and on course to becoming "water-scare" within nine years, as IndiaSpend reported last month, the scale of the conflicts listed in the Atlas further indicate a worsening situation.

The EJAtlas is a work-in-progress and hopes to add more cases over the coming years.

Most water conflicts in Himachal Pradesh, most over hydroelectric projects

The conflicts over water are most evident in the Himalayan state of Himachal Pradesh, and most are related to hydroelectric projects, often planned without considering needs and consent of local communities.

Similar conflicts have been recorded in Jammu and Kashmir, Jharkhand, Manipur, Mizoram, Orissa and Sikkim, among other states.

There are other kinds of water-management conflicts. In Khandwa, Madhya Pradesh, locals objected to a municipal corporation partnership with a private company to build a pipeline and augment water supply, because prices were to be decided by the company. Another example involves use of groundwater by Coca Cola, a beverages company, involved in five conflicts with local communities protesting bottling plants (one in Jaipur, Rajasthan, one in Dehradun, Uttarakhand, one in Plachimada, Kerala, and two in Mehdiganj, near Varanasi, Uttar Pradesh).

Dams are persistent sites of conflicts, especially when they are being built and commissioned, said Sailen Routray, an independent researcher based in Bhubaneshwar. He has worked extensively on water issues and conflicts.

"Almost all inter-state conflicts in India over river waters surround dams, and the consequent water allocations to warring states," said Routray. "There should be no more investments in big- and medium-sized dams in India. Similarly, work should stop on the river interlinking plan, as this plan has the potential to increase inter-state water conflicts manifold.”

Most Indian conflicts listed in the EJAtlas appear to be a consequence of the country's expanding economy.

For example, the raging underground fires in the Jharia coal mines in Jharkhand--an exclusive storehouse of prime coking coal--were first seen a century ago, started spreading in the 1970s and, currently, more than 70 mine fires are underway, polluting air, water and land and devastating the health of locals.

Several conflicts centre around garbage dumping sites, such as Deonar in Mumbai, Sultanpur and Bandhwari villages near the national capital region, Kodungaiyur near Chennai, Eloor in Kerala and villages around Bangalore. Across India, more than 3 million truckloads of garbage is dumped without being treated, as IndiaSpend has reported, a manifestation of growing urbanisation.

Conflicts have also erupted at construction sites of new airports, seaports and other big infrastructure projects. The common theme running through most conflicts is loss of right to land or livelihoods of local communities.

More conflicts in India than the Atlas lists

Although the EJAtlas lists 220 environmental conflicts in India, there are many more.

“You should realize that 220 is in proportion to population," said Joan Martinez-Alier, Professor of Economics and Economic History at the Autonomous University of Barcelona and director of the EJAtlas project. "India has more cases than any other country because good work has been done on the EJAtlas by our partners at JNU (Jawaharlal Nehru University) and also obviously because India is the country with the largest population in the world.”

He attributed conflicts to a growth in "social metabolism", prompted by economic expansion. “Materials and energy are extracted from new places and transported far away. Mining expands and reaches new frontiers. Hydroelectricity expands and reaches villages in the Himalaya,” said Martinez-Alier.

The high environmental costs in states that supply raw material

Environmental conflicts are global, but India differs from other developing countries in South America or Africa on one crucial point: External trade.

“Despite being a large country, India does not import or export too much," said Martinez-Alier. "Most of the extraction of materials in India is for internal consumption. But there are conflicts between states. Sometimes, about water rights. And, sometimes because some states (like Odisha, Jharkhand) become providers of raw materials for the rest of the country at very high internal social and environmental costs.”

A comparison of the states shows that some of them have indeed borne a larger share of environmental conflict.

In recognition of rising environmental disputes, the Government of India in 2010 established a National Green Tribunal to serve as a fast-track court for such disputes, but the tide of environmental conflicts is not ebbing.

“NGT has played a good role (in delivering environmental justice),” said Swapan Kumar Patra, one of the Indian contributors to the EJAtlas. In an unrelated paper, Patra and V. V. Krishna, professor at JNU and the other Indian contributor to EJAtlas wrote: “Since its inception, NGT has given many fast-track judgments in various cases and has passed several orders to the respective authorities like ban on illegal sand-mining, against noise pollution in Delhi, preservation of biodiversity of Western Ghat Mountains, wildlife protection in Kaziranga National Park in Assam, suspended many environmental clearance and so on.”

However, despite NGT's intervention and rising participation from affected locals, environmental injustice in India is on the rise.

“The problem lies in the way our governments perceive environmental issues," said S Ravi Rajan, faculty member in the Department of Environmental Studies at the University of California at Santa Cruz. "The Indian government (present and past) has failed to understand that economic growth is not inimical to environmental justice. In India, the laws are good, with a robust rights regime, and yet we have failed to deliver. China, in comparison, has a weaker rights regime, but they seem to have done a much better job at bringing down environmental abuses than India has."

The question, however, is not how to avoid the conflicts, said Martinez-Alier, but how to profit from the awareness of so many conflicts--"in order to move to an economy which is more sustainable and also more socially just".