India Is Losing Its Night To Light, At 3 Times World Average

Light pollution is gradually encroaching upon more of the Earth’s surface with the annual growth of such newly lit areas pegged at 2.2%, according to a new study published in the journal Science Advances.

Light pollution is an outcome of the excessive use of artificial light at night. This “loss of night”, as Christopher Kyba, 39, a Canadian-born physicist and the lead researcher of the study calls it, poses a significant health risk to humanity and is impinging on the habitat of nocturnal animals.

India is losing its night more than three times faster than the global average. Between 2012 and 2016, the study period, India’s area exposed to light pollution grew by a third, Kyba told IndiaSpend in the course of a Skype interview.

Using five years of satellite images, Kyba found that light pollution has mostly encroached on regions that were previously unlit. Of significant concern is his finding that the shift to more energy-efficient lighting--popularly known as light emitting diodes (LEDs)--has not saved energy as anticipated. “Instead, we have spent our savings on new light, and thus exacerbated light pollution,” said Kyba.

Studying the night is Kyba’s work and hobby. As a postdoctoral researcher with the GFZ German Research Centre for Geosciences in Potsdam, Germany, and a guest researcher at the Leibniz-Institute of Freshwater Ecology and Inland Fisheries, he studies the health and ecological impact of light pollution. In his free time, he explores the night sky and the stars. 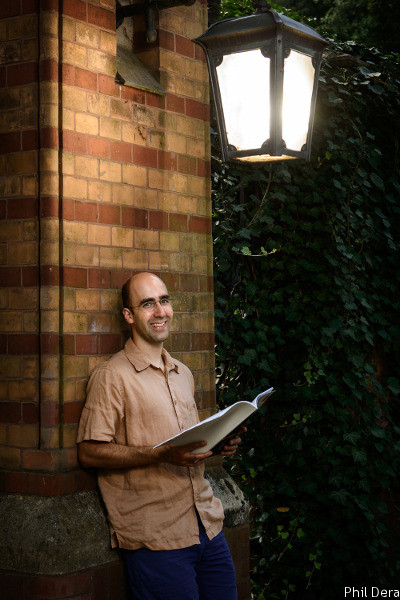 Christopher Kyba studies the health and ecological impact of light pollution. In his free time, he explores the night sky and the stars. (Copyright Phil Dera)

You can join Kyba in his research. He invites you to take part in one of his initiatives that involves quantifying the skyglow produced by cities, and how it is changing. “Citizen science is the only way to track skyglow changes worldwide,” he said. You can submit measurements via the Loss of the Night app for androids and iPhones, or via this website.

You measured the artificially lit surface of the Earth at night. Using sensors, you measured the nighttime radiance in the spectral band of 500 to 900 nanometres (nm), which would include some light the human eye can see (typically in the 390 to 700 nm wavelength) as well as some light we cannot see. Setting a cut-off roughly equivalent to the outdoor night-lighting of a small town in the United States with a population of several hundreds, you found that the Earth’s outdoor area artificially lit above this threshold at night grew by 2.2% per year between 2012 and 2016. At 7.4%, India's annual growth in outdoor areas lit beyond the threshold at night was more than three times the global growth. What does this signify? What are some of your findings of the changes in nighttime radiance in India?

First, let me say a word on the threshold. We set the threshold at 5 nanowatts per steradian per centimeter square (nW cm-2 sr-1), that is the unit of radiance, which I know is not well known. While a small village in India lit with five to six poles at night would probably fall below this threshold, a town would fall above it. For perspective, the radiance observed at an international airport is typically ~150 nW cm-2 sr-1, or 30 times above our threshold. We found that the area in India lit above this threshold at night increased by one third between 2012 and 2016. This is in keeping with our overall finding globally that areas with fewer lights to begin with (in 2012) were more likely to have recorded the most change (by 2016). What this means is many towns in India must have seen a significant increase in outdoor lighting infrastructure in recent years. This could be in the city centre or because of the development of new suburbs.

Overall, we saw a greater increase in nighttime radiance over north India as compared with the south. Some places in west India also recorded a significant increase in nighttime radiance. We also found that radiance grew the most--roughly 25%--in smaller areas as compared with roughly 10% in India’s brightest areas. Overall, India’s medium-sized towns saw the most growth in brightness between 2012 and 2016.

To evaluate the loss of night, you measured nighttime radiance as opposed to measuring energy consumption. That said, you touched upon excessive energy use. To quote from your study: “Prosperity, safety, and security can be achieved with conservative light use.” What are some of the excessive uses of artificial light at night outdoors that need to be curtailed?

One of our biggest observations of concern was that outdoor light use is subject to a large rebound effect, and that this happens globally. This means that increases in luminous efficiency, such as the greater efficiency of light emitting diodes (LEDs) vis-à-vis incandescent lamps, have resulted in greater light use as opposed to energy savings. This is because as outdoor light has gotten cheaper typically through greater lamp efficiency, we have found more applications for it. Essentially, we have spent our savings from cheaper light on new light. For instance, the first nighttime outdoor lighting need in a campus may be to light up the roads. Once that is achieved at a cheaper cost, the management might think of lighting up a façade. So far we have only been thinking about the cost of energy. What about the growing light pollution? We need to justify every increase in outdoor lighting. Night-time outdoor lighting decisions are principally taken by municipalities and by institutions and organisations in the private sector. While the decisions of urban local bodies are primarily driven by economics, decisions by private institutions may also be influenced by the need to stand out/to establish a brand, such as the previous example of lighting up a façade. Some of these decisions are clearly wasteful. I estimate that about 80-90% of the outdoor lighting in developed nations like the USA and Spain is wasted. It is important for developed countries to undo those mistakes and for developing countries to not repeat those mistakes. I have read reports (such as this) of the installation of high-mast lights in India being questioned for their relevance and need. This is a good example of the need to reflect on night-time lighting use.

What technologies or best practices can help save energy and increase useful nighttime radiance as opposed to wasteful radiance?

Technologies like lighting control can help save energy and reduce radiance (light pollution) without compromising safety, by dimming night lights in areas with no need for bright light after a certain hour. The way lights are fitted is also important. Often a lamp (incandescent or sodium vapour or LED) is fitted to shine in all directions. This is a bad idea in outdoor lighting where you really want to drop down light on a path or area. This has become quite an issue in certain suburbs of New York in recent years where residents have complained of what is called ‘light trespass’ [you can read more on this issue here and here] when the existing sodium-vapour lamps were replaced with more efficient LEDs. The light of LEDs comes from a smaller area than sodium-vapour lamps and can feel harsh. If you think of it, light streaming into bedrooms at night is a waste. The solution does not lie in removing lamps but in using light efficiently. In New York (as elsewhere), often, adjusting the angle of the fitted lamp has helped to reduce residents’ distress. Fibre-optic technologies exist to achieve selective or directed lighting. The colour of the lamp can also help promote energy efficiency as well as reduce radiance. Essentially, the practice of installing one-size-fits-all solutions has contributed to energy consumption and light pollution.

Light affects human health in various ways. To start with, light affects the body’s inner clock. Disruptions to this clock have been related to insomnia, depression and cardiovascular disease, to name a few diseases. Early research shows that exposure to artificial light at night can increase the risk of breast cancer [see this 2017 study by the Harvard T.H. Chan School of Public Health published in the Environmental Health Perspectives journal] and prostate cancer [see this 2017 study published in the journal of Biological and Medical Rhythm Research or this 2015 study published in Onco Targets and Therapy]. For the known health effects, it is indoor light that matters the most.

It is healthy to be exposed to bright light in the morning and during the day. It is also healthy to not be exposed to bright light at night. Artificial light at night keeps you awake, it makes you sleep later and wake up later. When urban residents go camping, they tend to feel sleepy earlier, hit the bed earlier and wake up earlier. People who can’t get to sleep because street light streams into their bedroom use shades or a face mask to get to sleep. This is not a good solution because it prevents sunlight from waking you up.

It is also not healthy to live mostly indoors where you tend to be exposed to one level of radiance throughout the day and night. This confuses the body. We believe that people who don’t get enough light in the day are more susceptible to night light. In places where people are growing aware to light pollution, they are making changes to how they use artificial light at night. Indoors, you could dim the lamps or use red lamps.

In addition to this, we must consider the effects of light pollution on nocturnal animals like bats that take their cues from the dark. Light pollution is playing havoc with their habitat.