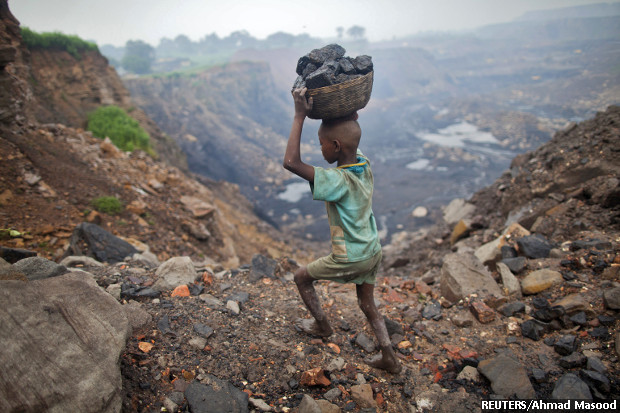 India now has the highest number of children stunted due to malnutrition - 48.2 million, equivalent to the population of Colombia, as per the latest global report on childhood. Also, 31 million of its children are a part of its workforce, the highest number in the world.

These two factors, along with early marriage and parenthood and lack of education, have pushed India to 116th position among 172 nations assessed for threats to childhood, according to the recent Stolen Childhoods report by Save the Children, an international non-profit working for marginalised and deprived children.

Globally, 700 million children have had their childhood curtailed early, said the report which was released on June 1, the eve of the international children’s day.

The index focuses on a set of life-changing events and uses certain indicators to assess countries: mortality among children under five years of age, malnutrition that stunts growth, lack of education, child labour, early marriage, adolescent births, displacement by conflict and child homicide.

India with the highest number of stunted children and child labourers in the world fared badly on most indicators.

India has highest number of stunted children in the world

Stunted growth is caused by chronic malnutrition in the first 1,000 days of a child’s life, from early pregnancy to age 2. India reports highest figures for stunting and one-third of all girls in the country suffer the condition, according to the report.

“Chronic malnutrition at this stage of life is largely irreversible, and stunted children face a lifetime of lost opportunities in education and work. They are also more likely to succumb to illness and disease, and can die as a result,” the report said.

Only one child among 10 in India gets adequate nutrition, India Spend had reported in May 2017.

For every 1,000 live births, 50 children under five die, a figure comparable to the poorer African island nation of Madagascar, IndiaSpend reported in March, 2017.

47 m youth of upper secondary age not going to schools

In India, 18.6% of children are out of school in the primary and secondary age group and 47 million youth of upper secondary age are not in school, said the report.

Children who are excluded from primary education will earn significantly less over their lifetimes than their educated peers. “The economic cost of not educating these out-of-school children – estimated at 0.3 to 15.2 percent of GDP in these countries – is far greater than what it would cost to achieve universal primary education” the report said.

Among Indian children in the 4-14 years group, 11.8% are working. That is 31 million children, the highest in the world.

Children working to support their families don’t just miss out on education, they also miss out on rest, play and recreation. They lose opportunities to engage with their community, and participate in cultural, religious and sports activities. This effectively means missing out on childhood.

Half of all children in India living on the streets or from coming from homeless families work for a living – at construction sites, hotels – and do not study, IndiaSpend reported in April 2016.

In India, 21.1% of all girls between 15 to 19 years are married while 103 million girls were married before they turned 18, according to the report.

Early marriage has devastating consequences for a girl’s life, effectively ending her childhood by forcing her into adulthood and motherhood before she is physically and mentally ready. Child brides frequently feel disempowered and are deprived of their rights to health, education and safety.

“Child brides are at greater risk of experiencing dangerous complications in pregnancy and childbirth, contracting HIV/AIDS and suffering domestic violence. With little access to education and economic opportunities, they and their families are more likely to live in poverty” the report said.

Further, 23.3 girls per 1,000 gave birth between ages 15 and 19, as per the report. Early childbearing impacts the nation’s economy and communities.

If adolescents in India waited till their 20s to become mothers, they would have greater economic productivity of upto $7.7 billion or Rs 49,600 crore, the report calculated.