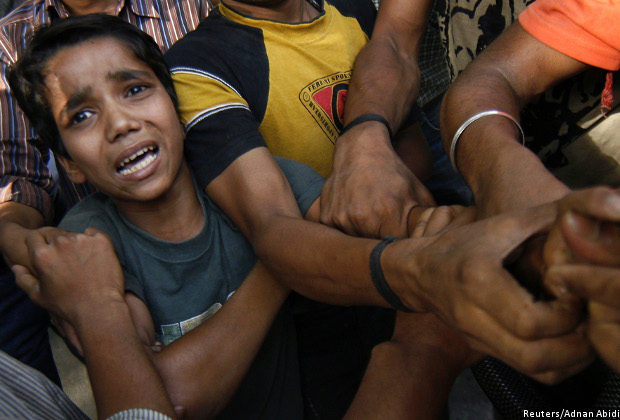 A child labourer cries as he is rescued during a joint operation by Labour department and a non-governmental organisation in New Delhi. India has some of the world’s best anti-slavery laws, better than Europe, but it also has more people living in modern slavery than any other country.

Nearly 46 million people live under conditions of slavery across the world, with 18 million (39%) of those in India, which is home to the world’s largest number of slaves, according to 2016 Global Slavery Index.

These 18 million Indians--twice the population of Sweden--have lost their freedom by way of bonded and domestic labour and sexual slavery, among other means.

Like the economy, slavery has also become a globalised phenomenon that generates a $150-billion industry, according to Kevin Bales, a professor of contemporary slavery at the University of Nottingham in the United Kingdom; he is also co-founder of Free the Slaves, a nonprofit based in the United States.

In an interview with IndiaSpend at the 2016 Falling Walls Conference, Berlin, where he was a speaker, Bales reveals it costs no more than Rs 13,000 to free an Indian from slavery. He explains that India has some of the best anti-slavery laws in the world and tells us how we can fight slavery.

1. How do you define slavery? What is the difference between forced labour and slavery?

‘Forced labour’ was coined in 1920s, as colonial powers did not want to use the word slavery. If one person is controlled by another person and violence or coercion is being used by the other person and if that control is for exploitation for labour or sexual or others, then it is a situation of slavery. It is not too different from slavery of the past. Slavery of the past has been legal sometimes but slavery existed before the invention of written law. Slavery is pre-law, pre-legal, the fundamental criteria (for slavery) is that if the person is under complete control and the purpose is exploitation, it would apply to ancient Rome and today. I use the word ‘modern slavery’ simply because it helps people know I am not talking historically.

2. What can you tell us about India, the global slavery index shows that India is one of the five countries with most numbers of slaves?

It is the country with the largest number of slaves. We have done random sample surveys and state-by-state random sample surveys (in India). The proportional share of slaves in India is not the highest. In Mauritania and Haiti, the proportion of slaves is much higher. In India, there are 18 million slaves in a country of 1.3 billion. One of the reasons why we focus on India is that we can get in the country and do the polls which we are not able to do in China where we are still trying. India has really good anti-slavery laws; it is a question of implementation. The laws are, in fact, superior to European laws. On the ground, in India, we have some of the most highly experienced anti-slavery groups, who manage different formulae of liberation addressing different types of slavery. I have been working with some of them over the past 20 years. 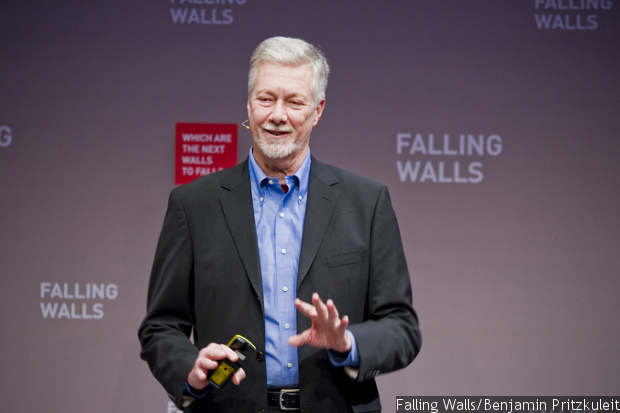 Kevin Bales, a professor of contemporary slavery at the University of Nottingham in the United Kingdom and co-founder of Free the Slaves, a nonprofit based in the United States, speaks at the 2016 Falling Walls Conference, Berlin.

3. Can you tell us about their work?

In Uttar Pradesh, there are groups that have been working on hereditary forms of slavery--so you have families who have been fundamentally in slavery; they do not even know for how many generations because they only remember back to their grandparents and these things continued on and on. We now know the mechanisms in that space, a community-organising model that can be used, that will break the norms of slavery, village by village, with risk reduced. I have to say, when we began 20 years ago, we had to learn how to mitigate the risk: Villages would come out of slavery to freedom, but the retaliation would be serious to the point of injury and death to the former slaves and also the people who helped them escape. In some ways, it is not a story told well by journalists today--there are people in the world today risking their lives to get other people out of slavery, and no one knows their names and most of them are paid about $100 (Rs 6,518) a month, and there is a story there. They are being shot at, and they get up and do it every day.

4. Is decline of agriculture in India another reason for slavery?

The interesting thing is that there are lot of things people do for business--not just in India, but across the world--with slaves that if they didn’t have slaves for it, they wouldn’t do it. For example, making sand: There are big blocks of silicon and you have people hit it and turn it into sand, and that seems ridiculous because sand is ubiquitous, and it only works financially if you don’t pay the workers. If you break the cycle of enslavement, the sand-by-hand just disappears. Brick-making is another such business. There is a belt from Punjab to Uttar Pradesh, below Nepal, where they make bricks because of the kind of soil found there. You can buy Chinese brick-forming machines for not many rupees, and they don’t need to pay for the machines because they have slaves--children and mothers. As soon as you break it (slavery), either they have to shut down or they have to buy those machines. There is controversy about Uzbekistan and cotton, which is harvested by college students in forced labour. I grew up in the cotton belt in the US, in Mississippi; what really changed there even after the abolition of slavery was the invention of the combined harvester. I have never understood--and I have spoken to the American government about why they don’t just loan them (Uzbekistan) money to buy harvesters from US manufacturers, and then they would not need to take students for forced labour.

5. What is the economic impact of slavery?

According to the UN’s estimation, the global annual turnover of slavery is $150 billion (Rs 9 lakh crore). In a global economy estimated to be $7-12 trillion, $150 billion is just a drop in the ocean. That’s good news because if we live in a world of 7.2 billion people and we have 46 million in slavery, you have a drop in the population ocean and $150 billion is a drop in the economic ocean. The question is, why do we have any slavery at all? One answer is because of laws that are not enforced, and there is low awareness about it. In a country like Norway, which has 5 million people and tight borders, why do they have any slavery? But they do, some hundreds. Some are in commercial establishments, some in agriculture and some in construction. The freedom dividend, we know that there is a freedom dividend, and we are measuring it in some of the places, like India. When people come out of slavery, they get to be consumers, and that means the economic cycle begins to churn, and if they do not have anything but a little bit of food, and they are only producing at the lowest levels, they are zero in the economic equation. But as soon as they start working for themselves, they work very hard. Because one thing that they always want to do is get their children out of the workplace and into a school, and then they start doing things like buying food, clothes and tools and so in areas where slavery is stopped; the local economy begins to grow, even creating opportunities for ex-slaveholders.

6. What kind of jobs do slaves usually do?

It is all about the stuff at the bottom of the economic ladder; it is in agriculture, mining, very simple extraction work, in sex and commercial sex exploitation. It is the simple, dangerous, demeaning work. So when slaveholders find work that no one else wants to do, they find ways to put slaves to do it.

7. What can we do to stop slavery?

If you want to consume your way out of the problem, it has an effect, but it has a low or small effect because you are so many steps away from the problem. If you say you will stop using this product because it has slave labour in it, that is good, but if that is all you are going to do, it won’t change much of anything unless you can convince a billion other people to do it too. The most powerful way would be, the heroes I was talking about, if you can find a way to give them a little bit of support, that is actually the most effective way. Suppose there is this group, in Uttar Pradesh and Tamil Nadu, and say we know every day they are getting people out of slavery and give them 20 Euros a month or something to help that happen, that is really direct because the cost of getting people out of slavery is actually very low. Most people in slavery are not in rich countries, but in poor countries, where the cost of everything is low. In India, when we calculated the cost to free a person, the cost came to $200 (Rs 13,000) per person. If you help free a person in Germany, it will cost $20,000 to $30,000 (Rs 13 lakh to Rs lakh) per person. The medical care, the legal care, the outreach, the offices and rent, it adds up there.

8. Which are the anti-slavery laws in India that are benefitting people?

One of the great laws against slavery is the Bonded Labour System (Abolition) Act 1976, which allows the transfer of a little bit of capital to every person who comes out of slavery and support. When you come out of slavery, you have nothing, no assets and no training, but you know you have a job skill and under Indian law, you get a grant immediately so that you have food, clothing and shelter immediately, and safety, if it is done right. Then in a few weeks, someone comes and talks to them (freed slaves) and then there is a large payment, so they can buy, say, a set of tools or land or what they need to make a living. I know ex-slaves who bought four mobile phones and became “mobile companies” for their village.

(Yadavar is principal correspondent at IndiaSpend.)