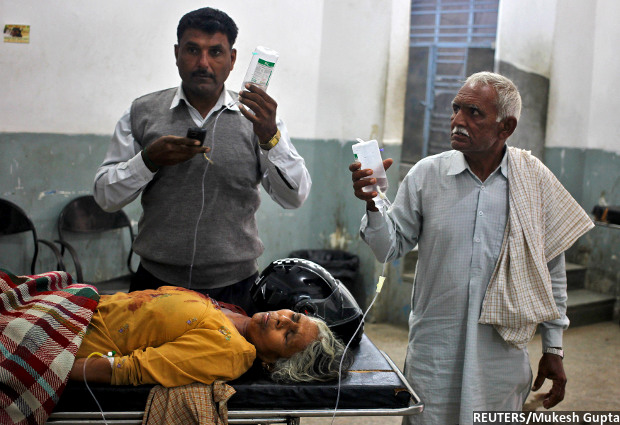 India did better only than Pakistan over 15 years to 2015 among 19 countries in South and Southeast Asia (including China) by potential and actual healthcare access and quality.

The second largest and the fastest growing economy in the region, India saw its gap widening by 5.5 points, 1.4 points less than Pakistan, in 1990-2015, according to an IndiaSpend analysis of the Healthcare Access and Quality (HAQ) Index published in The Lancet, a British medical journal.

The study--published on May 18, 2017--argued that inequality between states and the health sector that has failed to keep up with changing trends in diseases could be responsible for the widening gap in countries like India.

The index goes from 0 to 100: the higher a country’s value, the better.

The study used a socio-demographic Index consisting of income per capita, average years of education and total fertility rates and the HAQ index to calculate “the maximum levels of personal health-care access and quality achieved” at a level of development. This helped quantify the difference between a country’s HAQ index and the highest value the index could attain given the country’s stage of development in 1990 and 2015.

For instance, Turkey tops the chart as it has the moved greatest distance (14.2 points) in the direction of closing the gap (hence negative sign), while Lesotho is at the bottom as it has slipped the greatest distance (21.1 points) away from its potential (hence positive sign) in the 15 years to 2015.

“If every country and territory had achieved the highest observed HAQ Index by their corresponding level of [development], the global average would have been 73.8 in 2015,” the study noted.

India at the bottom in BRICS group, 178th among 195 countries

For data on 195 countries evaluated in the study, click here.

India, along with Djibouti and Kenya, stood 178th among the 195 countries surveyed. The median countries (ranked 98th)--Azerbaijan, Antigua and Barbuda, and Montenegro--saw their gaps narrow by 2.3 points in 1990-2015.

For Southeast Asia--comprising Cambodia, Indonesia, Laos, Malaysia, Maldives, Mauritius, Myanmar, Philippines, Sri Lanka, Seychelles, Thailand, Timor-Leste and Vietnam--the gap widened by 1.5 points and the index increased from 38.6 in 1990 to 52.1 in 2015. (The study clubbed China with North Korea and Taiwan under East Asia.)

Creaky public health infrastructure leave poor to fend for themselves

Access to quality healthcare in rural areas also depends on location with even poor households able to access better services if they live in richer villages, according to this 2016 research report by Jishnu Das, a World Bank economist, and Aakash Mohpal, an economics PhD candidate at the University of Michigan, Ann Arbor, US.