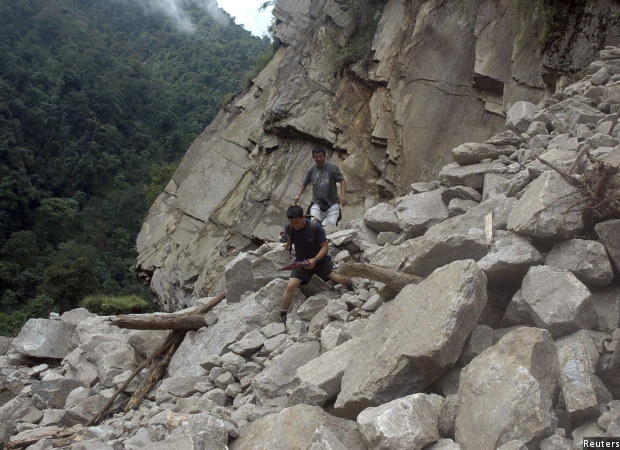 Men walk through a road which was damaged by a 6.9 magnitude earthquake in northern Sikkim in September 2011. The 62,159-sq-km area, along what is called the “Indo-Burmese arc”, which runs through India, Bangladesh and Myanmar, is at risk of a monster earthquake of possibly magnitude 8.2 to 9, but when that might happen is unclear--it could be 500 years from now or it could be tomorrow.

A monster earthquake of possibly magnitude 8.2 to 9 is brewing beneath Bangladesh, Myanmar and Northeast India, imperilling 140 million people within 99 km of its potential epicentre, according to a new paper in the journal Nature Geoscience.

When that might happen is unclear. It could be 500 years from now or it could be tomorrow, but the researchers said an earthquake is inevitable.

The 62,159-sq-km area, along what is called the "Indo-Burmese arc", which runs through India, Bangladesh and Myanmar, is where the Indian tectonic plate–a raft of the earth’s crust that bears the subcontinent–is diving obliquely under the Sunda plate in Myanmar, at around 46 mm a year. The two plates have been stuck for 400 years, and a growing strain could eventually liberate itself in a large earthquake, researchers said.

The evidence comes from the first detailed picture of the region's tectonic motion. A team of scientists from the U.S, Singapore and Bangladesh analysed the combined data over 13 years from global positioning system (GPS)--a network of satellites around the earth used to locate positions, in this case plates that form the planet's crust--stations in Bangladesh, with additional data from India and Myanmar.

“This is the first regional GPS study that uses data from across the entire plate-boundary region (locations where two tectonic plates meet),” Michael Steckler, the lead author of the study and a geophysicist at Columbia University's Lamont-Doherty Earth Observatory told IndiaSpend.

“This is a great work," Vineet Gahalaut, Director, National Centre for Seismology, New Delhi, told IndiaSpend. "Lots of groups and people are working on the Himalayan region, not in this region. Considering the lives involved, the study brings much-needed attention to the seismology of the region.” Gahalaut is not involved with the study.

As many as 107 Indian towns and cities lie in areas prone to earthquakes, with 60% of the subcontinental landmass vulnerable, IndiaSpend reported in April 2016.

Steckler said they have long guessed a megathrust fault--the interface between tectonic plates--may be lurking underneath Bangladesh, but they did not have the data or the model. Now, using data from the GPS arrays, which can track the crust's movements accurate to within 2 mm each day, “we can see the motion of the various blocks and across faults over the years”.

The region is unstable below the surface as much as on the surface, with a daily dose of social, economic and security problems. Fault lines crisscross the innards and surface. “The presence of a locked megathrust plate boundary represents an underappreciated hazard in one of the most densely populated regions of the world,” said the paper. 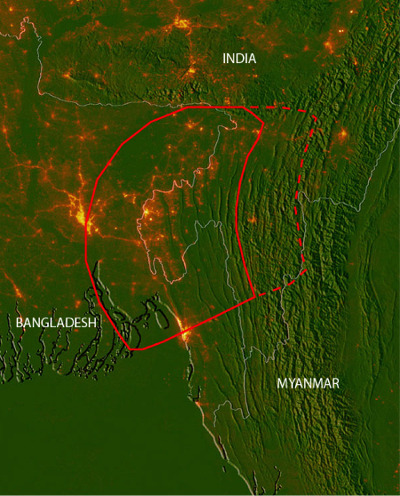 Note: The red line is the area of the fault, an area of about 24,000 square miles, which could jerk in the event of an earthquake. An earthquake would likely start at the deep eastern end and grow to the west. The yellow-orange shows nightlight to illustrate population density. Folds in the centre of the image are ranges of hills. The dashed line means the earthquake could possibly start deeper and farther to the east.Credit: Christopher Small and Michael Steckler

India and Asia: A nature of great tectonic conflict

The newly identified subduction zone--where one tectonic plate dives under the other--yet again illustrates the patchwork of faults in South Asia. As India plows into Asia, some of the continent is wrapping around the side of the Indian plate, causing considerable deformation in Asia. The Indian and Eurasian plates have been in conflict for 50 million years at this collision zone, with the Indian plate diving, northward, under the Eurasian plate.

“This produces the combination of mostly sideways and some convergence in this complicated zone,” Steckler explained.

The world's largest earthquakes occur at subduction zones, when slabs of heavy ocean crust slide under the other plate below the ocean floor or under neighbouring continental crusts.

Animation showing how strain builds up and is released in earthquakes at subduction zones, and possibly trigger tsunamis.Source: Incorporated Research Institutions for Seismology (IRIS)

However, this particular subduction zone in the Indo-Burma region is right under our feet, so to say, and its nature has been a bone of contention. Since the motion between the plates is angled, some researchers thought the two plates were sliding past each other and that there was no significant coming-together between the plates and hence no subduction, a more violent affair.

The latest GPS evidence indicates motion consistent with subduction. "Furthermore," said Steckler, "the pattern of deformation indicates that the two plates are locked--they are stuck together (the Indian plate is stuck to the underside of mountains in Northeast India and Myanmar)--but will eventually jump in a large earthquake.”

Another peculiarity of the region is its sedimentary build-up. As the Himalayas erode, mud pours into the Ganga and Brahmaputra and finally spills into the Bay of Bengal. This mud is being scraped off and folded up to form the Indo-Burman Ranges, like a rug being pushed against a wall, as Steckler put it, further destabilising the plates. “The largest difference between this and other subduction zones (not counting zones where continents are in collision) is the enormous thickness," said Steckler.

This mud also feeds the plains of the Ganga and Brahmaputra basin, turning it one of the world's most fertile regions. The researchers estimated that sediment disgorged from the rivers has moved the edge of the continent westward by about 400 km near Bangladesh.

With the mud piled up as thick as 19 vertical km, it is challenging for scientists to pinpoint the contours of a future temblor.

In effect, the region's 140 million people are living on jelly. In the event of an earthquake, Steckler said, the thick sediment may reduce "high-frequency shaking" but will amplify "low-frequency ground shaking", which refers to violent shaking that can topple buildings.

"No one has yet modeled the effect in detail, but overall, I think, it will make the effects of the earthquake worse," said Steckler. "There may also be liquefaction, where the ground can temporarily lose solidity, and buildings can topple.”

The present study focused on the eastern boundary of the Indian plate, the Indo-Burman range, but tectonic disquiet grows as well on the northern boundary, on the Main Himalayan Thrust, as IndiaSpend reported here and here.

There is, as IndiaSpend reported in October 2015, a possibility of a more severe earthquake in the Himalayas–although it isn’t certain when–than the 7.8-magnitude temblor that devastated Nepal on April 25, 2015.

Steckler acknowledged that a study of this nature calls for more data collection and interpretation. For example, researchers don’t know when the last one was or how often they repeatedly occur, and so they cannot estimate a time for the next one. There is not yet robust data on the shape of the fault, how much strain is taken by the folds and how much at the meeting of the plates, the megathrust.

Researchers say they’re working on collaboration, and a tripartite meeting between India, Bangladesh, and Myanmar scientists--including Steckler and his colleagues--had been held. Gahalaut said that a "big project" is in the works--with each country’s researchers seeking funding from their own respective ministries--to possibly include early warning systems. “We’re going to share data and analyze it jointly,” he said.