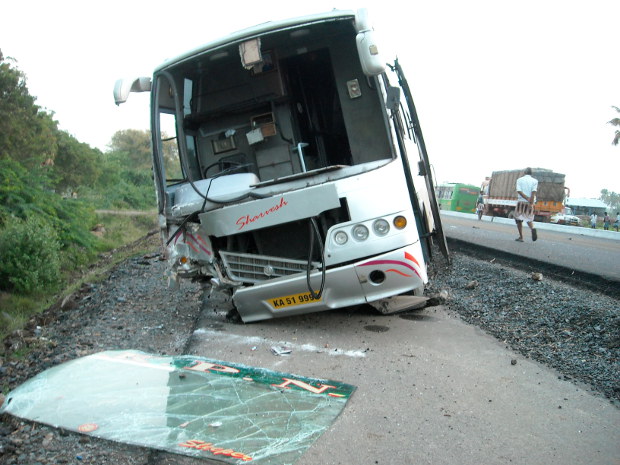 Despite having 99 million fewer people and fewer vehicles, the number of deaths in road accidents in India is more than twice the number of people killed similarly in China, according to a government report. 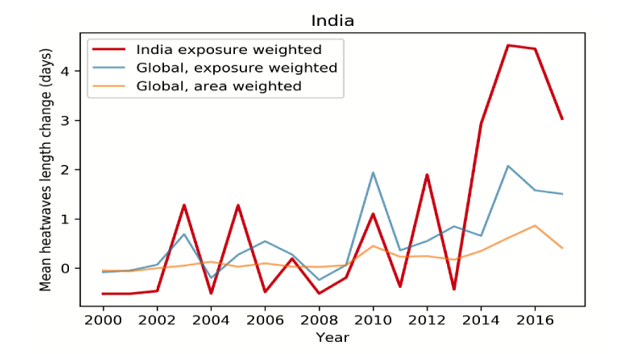 About 377 people die on Indian roads every day, the world’s highest fatalities in road accidents, according to “Road Accidents in India 2013”, a Ministry of Road Transport and Highways report. The majority of deaths stem from unsafe driving and carelessness--as the Salman Khan case indicates and the data confirm.

As the 21st century rolled in—and it became clear that China had outstripped India on most measures—one of the things that India took comfort from was the fact that dangerous as Indian roads were, more Chinese died in traffic accidents then.

However, since 2005—if we believe Chinese statistics—China has reduced deaths in road accidents by almost a third over five years. Over the same period, traffic deaths in India increased 41%.

In 2013, the United Kingdom (UK) reported 73% fewer fatalities than just the deaths from alcohol or drug consumption in India that year--this when such substance abuse was responsible for less than 5% of deaths on Indian roads. 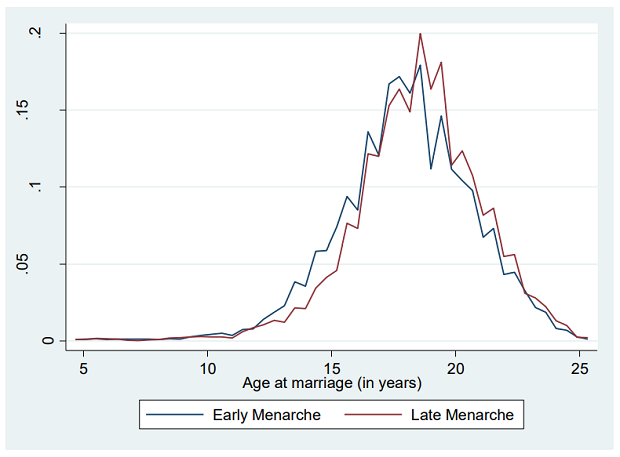 As many as 6,463 Indians were killed (and 20,081 injured) in road accidents caused by alcohol/drug consumption, compared with 1,713 people killed on the UK's roads.

High-profile cases, such as Salman Khan's drunken driving, may corner media attention, but two out of five road fatalities in India are caused by over-speeding: 56,529 people or 41% of all deaths in road accidents.

Overloading and overcrowding of vehicles (20.8%) and protruding loads (7.1%) were the other big killers. The root cause of all these deaths is human error and neglect of basic safety measures and rules, which means most are preventable.

Whom to blame? The driver

A vast majority of India's accidents, 78%, are the fault of the driver (refer Table 3). 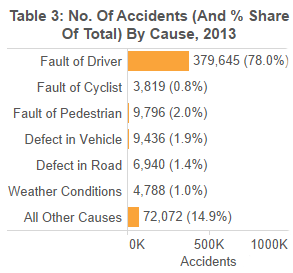 Other factors combined, such as vehicle defects, pedestrians, cyclists and road conditions, account for less than a quarter of accidents.

"Fault of Driver" also accounts for nearly three-fourths of all road deaths. These are deaths caused by human error and a disregard of rules.

Easy way out: Focus on 5% of roads

India's road accidents can be pared by concentrating efforts on less than 5% of its road. 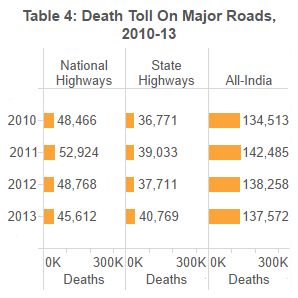 Better monitoring, enforcement and emergency responses on these roads can reduce many accidents and save lives.

Of the road deaths, 37% were in urban areas, while rural India accounted for the rest. This is broadly in line with the general population.

The largest numbers of accident victims are two-wheeler riders/passengers – they accounted for 39,353 road deaths – more than a quarter of the total fatalities on roads (refer Table 5). 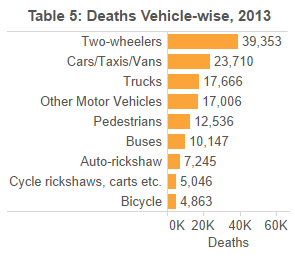 This is because two wheelers are the most numerous vehicles on Indian roads and a rider or passenger on a two-wheeler is far more exposed than someone inside an automobile or similar vehicle.

Many of these deaths/injuries can also be brought down if helmets are made mandatory for 2-wheeler riders/passengers. They are mandatory only in a handful of major metros–and usually only for the driver.

In some major cities, there are civil movements against helmet-wearing laws. Just as seat-belts have been made mandatory for all cars sold in India, helmets could become compulsory accessory for any two-wheeler sold – and wearing one should be mandatory.

As many as 12,536 pedestrians were also killed in accidents, the result of wanton law-breaking by vehicles and walkers alike--aside from the lack of proper pavements and pedestrian crossings.