In Two Years, Crimes Against Women Passengers On Indian Trains Up 35%

Between 2014 and 2016, there was a 35% rise in crimes against women passengers reported on Indian trains, according to data submitted by the railway ministry to the Rajya Sabha (upper house of Parliament). As many as 606 cases were reported in 2016, up from 448 in 2014. 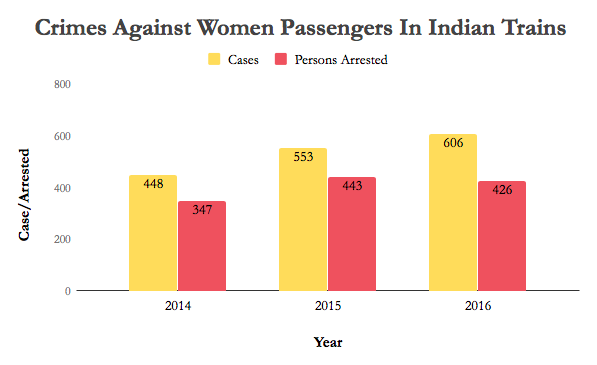 For safety and security of passengers, 2,500 trains on vulnerable sections are escorted by Railway Protection Force (RPF) personnel in addition to 2,200 trains escorted by state police personnel, the ministry’s reply stated.

Ladies special trains in metropolitan cities are escorted by lady RPF constables, the ministry said, adding that special drives are being conducted to prevent entry of male passengers into compartments reserved for women.

The ministry also mentioned the distress helpline on toll-free number 182 which was launched 2015 for providing security-related assistance to passengers.

An Integrated Emergency Response Management System to provide round-the-clock security to women passengers in 983 railway stations by strengthening of security control rooms with 182 security helpline, medical facilities, RPF and police, installation of CCTV cameras, etc. was approved at an estimated cost of Rs 500 crore, according to this January 2017 press release by the ministry of women and child development.

The money was sanctioned from the Nirbhaya fund--a dedicated fund or implementation of initiatives aimed at enhancing the safety and security of women in the country.

As of July 2017, Rs 50 crore was released of the sanctioned Rs 500 crore, according to this reply to the Rajya Sabha.