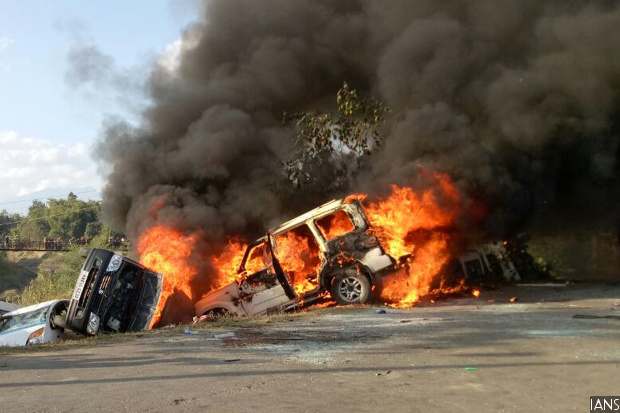 Vehicles set ablaze by a mob protesting against the Naga economic blockade near Imphal, Manipur, on December 18, 2016. The economic blockade of the Imphal-Dimapur road and the Imphal-Silchar road, through which most goods are brought into the state, has overshadowed all other issues this election year in Manipur.

The economic blockade of the Imphal-Dimapur road and the Imphal-Silchar road, through which most goods are brought into the state, has overshadowed all other issues this election year in Manipur, the north-eastern state with one of India’s highest poverty rates, high youth unemployment, and low growth.

State elections in Manipur, a state half the size of Haryana, with one-third the population of Mumbai, over 30 tribal groups, and six active terrorist groups, will take place in two phases, on March 4 and March 8, 2017.

“People are not able to see beyond the hope of peace,” said Pradip Phanjoubam, editor of the Imphal Free Press, on the blockade ongoing since November 1, 2016.

The blockade has been imposed by the United Naga Council, which demands the government go back on its decision to create new districts in the hill areas of Manipur, Firstpost reported in February 2017. The group contends that Naga groups were not consulted before the decision, and some new districts divide what Nagas consider their ancestral land.

The government, led by chief minister Okram Ibobi Singh, said that new districts will help administer the region better, as the Hindustan Times reported in January 2017. The new districts do not change assembly constituencies.

But the focus on the blockade has pushed other important issues in Manipur to the background.

“Unemployment should have been a big issue, but isn’t because of the blockade,” said Phanjoubam, editor of the Imphal Free Press. “This election is removed from everyday realities.”

A third of Manipuris live under poverty line, but good basic-health indicators

Two of those realities appear to be in conflict: India’s third-poorest state also has the country’s lowest infant mortality rate (IMR), which at nine deaths per 1,000 live births is better than Brazil, Argentina and Saudi Arabia, according to World Bank data.

Some reasons for low infant deaths include better medical facilities, more doctors and nurses and women empowerment, as IndiaSpend reported in February 2016. Manipur has one doctor for every 1,000 people, as recommended by the World Health Organization (WHO), and better than the all India average of one doctor for 1,700 people. The trained nurse to population ratio is 1:600 compared to the India average of 1:638.

Only two states--Chhattisgarh and Jharkhand--have a higher proportion of people below the poverty line than Manipur.

Note: Rankings are among 29 states; they do not include union territories.

These health and gender indicators are high in spite of the insurgency, which began in the 1960s, after Manipur, home to over thirty tribes, became a part of the Indian union.

There are broadly two insurgent demands--one from the Nagas who want Greater Nagaland, a state which would contain parts of Manipur. The Nagas are one of three major ethnic groups in Manipur, along with the valley-based Meiteis and the hill based-Kukis.

The other insurgent group, comprised of the majority Meiteis, wants to secede from India, and form a separate sovereign state. Despite the turmoil, deaths related to the insurgency have fallen.

Reduction in insurgency-related deaths: Down 90% over 10 years

Another issue of contention is the 59-year-old Armed Forces (Special Powers) Act (AFSPA), which provides special powers to Indian armed forces in disturbed areas of Arunachal Pradesh, Assam, Manipur, Meghalaya, Mizoram, Nagaland and Tripura. These include the power to fire, even if it causes death, at any person who breaks a law, including assemblies with more than five people.

The AFSPA also gives an officer the power to arrest without a warrant a person who has committed a cognisable offence (serious crimes for which a police officer can start investigation without permission of the court), or if the officer has suspicions that the person might commit one. An officer working under this Act cannot be prosecuted without the sanction of the central government.

Detractors say it gives armed forces too much power and allows them to act with impunity. Residents have demanded the act be rescinded from Manipur.

Irom Sharmila, a Manipuri activist who was on a hunger strike against AFSPA for the past 16 years, broke her fast this year, to form a political party with the aim of repealing the Act from Manipur. Her party, People's Resurgence and Justice Alliance, the Bharatiya Janata Party, and the Naga People’s Front, are some major parties contesting for a government that has been run by the Congress party for 15 years.