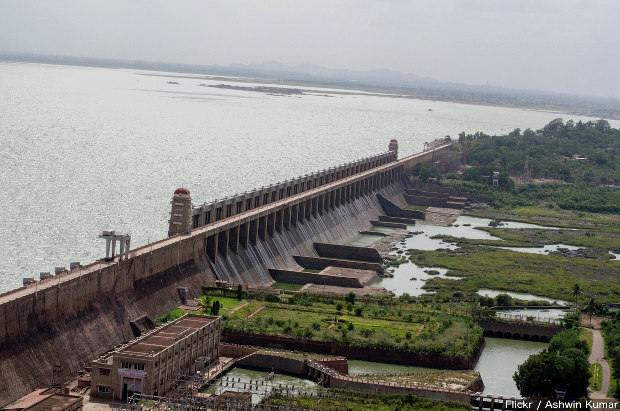 Of 11 states ravaged by drought in 2016, seven—Karnataka, Andhra Pradesh, Telangana, Maharashtra, Gujarat, Jharkhand and Chhattisgarh—had less than average water in their reservoirs in June 2016.

Levels in dam reservoirs were no more than 10% of capacity for four of the 11 states as June ended, according to the reservoir data with the Central Water Commission. This is despite the fact that eight of the 11 had normal rainfall in June; rains were 30% short of normal in Maharashtra, Chhattisgarh, Odisha and Jharkhand.

Telangana reservoirs are at 2% of capacity, Maharashtra’s at 5.6%, Andhra Pradesh and Karnataka at 9.5%, which means South Central India is particularly short on water. Maharashtra, with reservoirs at 5.6% of capacity and a 33% deficit in June rainfall, was the worst-hit state at the end of June.

The situation in 2016 is a reminder of the 2009 drought that wreaked havoc with India’s economy by pushing inflation to double digits. But much will depend, experts said, on how the monsoon progresses over the next three months.

Although reasonable rainfall was reported from Maharashtra’s central and southeastern Marathwada region, a traditionally drought-prone area, reservoir levels remain at 1% of capacity—as they have been since a month—an unprecedented situation.

Madhya Pradesh, Odisha, Rajasthan and Uttar Pradesh were four of 11 drought-hit states that reported more-than-average water in their reservoirs. 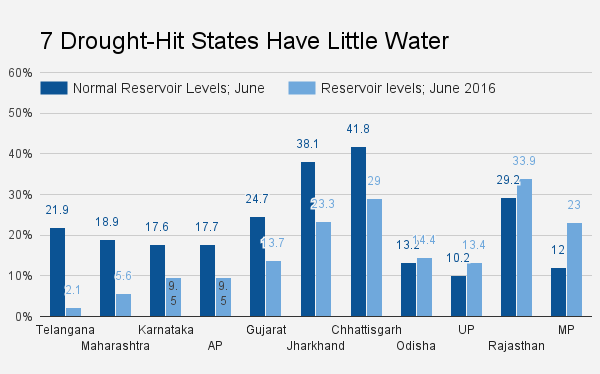 The southwest monsoon hit India eight days late, breaking over Kerala on June 8, 2016, instead of June 1. It reached Mumbai on June 20, 10 days later than normal.

Karnataka, Andhra Pradesh and Uttar Pradesh are the drought-hit states that received more than average June rainfall till June 23, according to India Meteorological Department data. 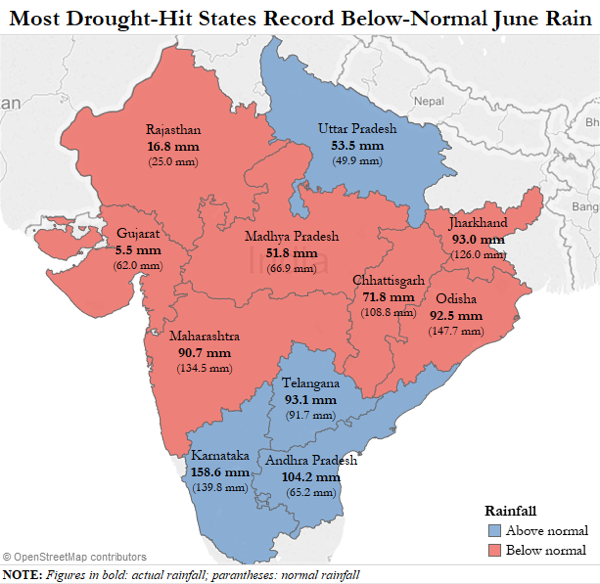 While monsoon rains are underway in southern and eastern India, and most of the central plains, Gujarat and Rajasthan have got little or no rain.

Despite higher-than-normal rainfall in June 2015, all states reported uniform shortfalls over the 2015 monsoon season, indicating that June rainfall is not a harbinger of what might happen.

If the two water indicators—reservoir levels and rainfall (in June)—are taken together, Maharashtra, as we said, is the worst-affected state in India.

Andhra Pradesh and Karnataka, both equally affected by the drought and with water in their reservoirs at less than 10%, have benefitted from above-normal June rainfall.

While the CWC data covers only major reservoirs in Maharashtra, the state government water resources department puts water levels in Maharashtra dams at 9% of capacity, the lowest in eight years.

June rainfall in 2014 was a fourth of normal; in 2016, it was half of normal. The northern and eastern areas of the state, the Vidarbha region, were worst hit in 2009, sparking a wave of farmer suicides.

“If we consider the four-month rainfall—June, July, August and September—as important for agriculture, a delayed monsoon will undoubtedly reduce the June rainfall,” Ranjan Kelkar, former Director General of India Meteorological Department (IMD) told IndiaSpend. “That tells us nothing about rainfall in the remaining three months; it all depends on how strong the coming monsoon winds are.”

In April, the Met forecast above-normal monsoon rainfall for the June to September 2016 season, standing by its forecast in June. As Kelkar said, it all depends on the next three months.