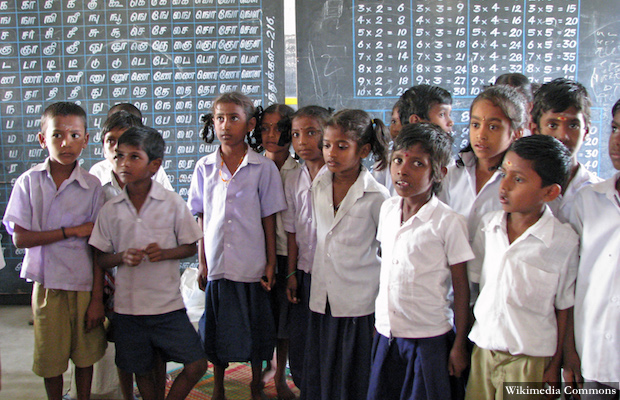 India is now dealing with the twin issues of undernutrition and overnutrition, both swelling its burden of non-communicable diseases, according to a recent study conducted by National Institute of Nutrition (NIN).

In urban areas, among children under five, 25% were underweight, 29% were stunted and 16% were wasted (low weight for height). While the prevalence of malnutrition in children in urban areas was lower than rural areas, it is much higher than other developed countries.

Non communicable diseases like heart disease, diabetes, chronic respiratory diseases, cancer and others cause 60% of deaths in India, 55% of them prematurely. India stands to lose $4.58 trillion (Rs 311.9 trillion) between 2012 and 2030, due to these diseases according to the nonprofit, World Economic Forum.

In a first investigation of this scale, NIN, which operates under the Indian Council for Medical Research (ICMR), covered 172,000 people in 52,577 households in 16 states to assess the diet and nutrition status of the country’s urban population. Its aim was to also study the prevalence of diabetes, hypertension, obesity and dyslipidemia or imbalance of triglycerides and cholesterol.

The study conducted in 2015-16 also found that one in every five men was a smoker and one in three consumed alcohol regularly.

Among children, only 57% of children between the ages of one and three and 68% of those between four and six consumed adequate amounts of proteins and calories, the study found.

In urban India, 16% of children were born with low birth weight (LBW) which puts them at risk for infections and even early death, as IndiaSpend reported in November, 2016. The problem can be traced to poor nutritional status of the mother, short stature and poor nutrition during pregnancy: only 56% of pregnant women were consuming adequate amounts of proteins and calories, the study found.

Other reasons for the poor indicators would be poor infant and young child feeding (IYCF) practices. Only 42% of women initiated breastfeeding within first hour of delivery while nearly one in four mothers gave pre-lacteal feeds like honey, glucose/sugar water and goat milk immediately after birth. These have been linked to causing delays in breastfeeding.

Stunting, underweight and wasting among children under five years of age was more common in scheduled caste or scheduled tribe families with low per capita income, illiterate fathers and no toilet facilities. For example, 34.4% of scheduled tribe and 39.4% of scheduled caste suffer compared to only 26.8% of other castes. Similarly 38.6% of children of illiterate fathers are stunted compared to 20.5% of college educated fathers.

By WHO standard, more than half of India’s urban adults are overweight

Urban men and women both reported high body mass index (BMI) which should be less than 23 as per WHO standards. NIN has different standards and by those the study found that while 34% of men were overweight (BMI>25), 13% were underweight (BMI<18.5). Among women, 44% were obese and 11% underweight.

By WHO’s Asian standards, 52% men and 59% women are overweight in urban areas. 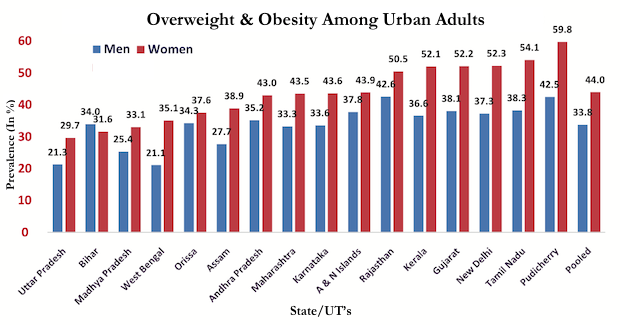 Hypertension or high blood pressure is prevalent among 31% men and 26% women in urban India. Hypertension is diagnosed when the systolic count is over 140 mm Hg and diastolic over 90mm Hg. 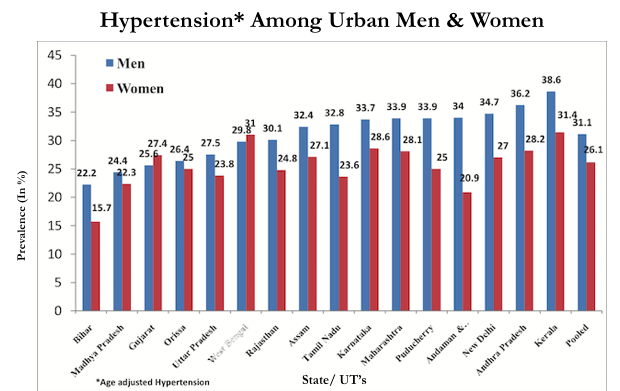 Fasting blood sugar of more than 126 mg/dL, the cut-off for a diabetes diagnosis, was found among 22% of urban men and 19% of urban women.

Prevalence of diabetes was the highest in Puducherry for both men (34%) and women (29.8%).

Madhya Pradesh had the lowest prevalence among men (12%) and Orissa among women (12.6%).

Most diabetic were in the 60-70 age group, the smallest numbers came from the 18-30 years band. 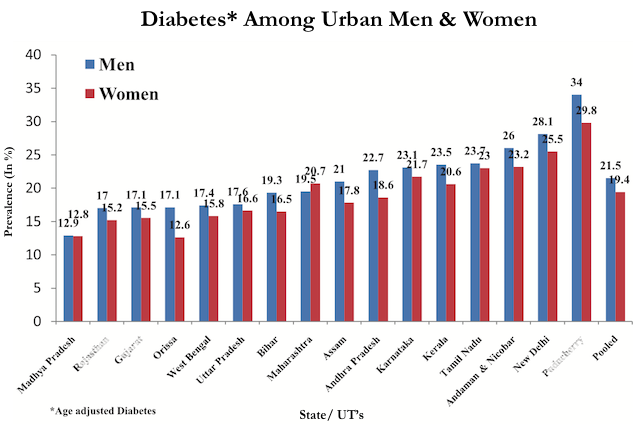 Few exercise, walking is most popular

As work goes, 63% of men in urban India were putting in more than eight hours a day and mostly at a desk, while sitting. Among women, 72% worked for less than eight hours a day, mostly doing household chores such as cooking, gardening and “maintenance of the house”. However, 27% of Indian women are a part of the national workforce, according to the World Bank.

Diabetes and hypertension linked to obesity, alcohol and tobacco consumption

Sixteen percent of adults were smoking different tobacco products like cigarettes, bidis and cigars and 25% were addicted to smokeless tobacco products; 30% of men consumed alcohol.

Men who used tobacco or alcohol had stayed with the habit for over ten years. Smoking and alcohol consumption among women was not even mentioned by the study though 6.5% of Indian females over 15 years of age consume tobacco, as per the Global Adults Tobacco Survey (GATS) 2016.

The study found direct correlation between diabetes and hypertension with obesity, physical inactivity, high cholesterol and alcohol and tobacco consumption.

The study has recommended that communities be sensitized about the causes and consequences of obesity, hypertension and diabetes, especially in terms of nutrition, using information education, and behaviour change communication (BCC) methods.

Correction: There were errors in figures for highest number of overweight men and women, they have been corrected.