In Disaster, Bank Accounts Do Not Provide Financial Security 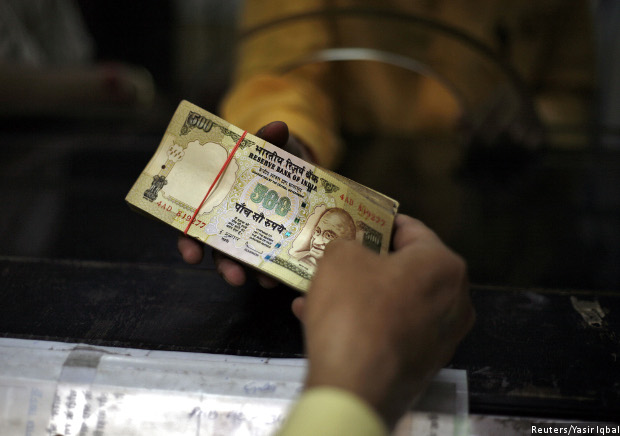 A man deposits his money in a bank in the northern Indian city of Amritsar. People were uncomfortable putting money into bank accounts either because of a lack of trust, or simply because they didn’t save enough after daily needs were met, a survey conducted in three villages and 11 urban areas revealed.

Although 10 million bank accounts were opened on a single day--a global record, as part of Prime Minister Narendra Modi’s nationwide plan to ensure the poor have bank accounts--more than 30% remain without money, as IndiaSpend reported earlier, quoting government data.

In an attempt to find out how financially secure people were at the time of these disasters, we travelled across the most-ravaged areas of these two states, talking to families in three villages and 11 urban areas. These are the initial findings, albeit from a small random sample of about 200 households:

94% of households have bank accounts

Contrary to popular opinion, 94% of the families interviewed said that they had at least one bank account. Many had multiple accounts that they had to open to benefit from various government schemes, which do not allow them to use existing accounts.

Most people only used these accounts to gain state benefits: Only 7% used bank accounts for work-related transactions and 19% for saving schemes.

People were uncomfortable putting money into these accounts either because of a lack of trust, or simply because they didn’t save enough after daily needs were met.

But there were other forms of investments people claimed to be making.

Due to a lack of alternatives, or tempted by good returns, many still participated in private chit funds despite knowing a history of fraud. Many women were part of more informal self-help groups or social-kitty systems, where 20 to 25 women got together and pooled in Rs. 10,000 to Rs 20,000 per person into one account. They accessed these funds based on their needs and returned it with interest over a fixed period of time.

This system works primarily on the social trust that people have with each other, but many people who had asset-based livelihoods, such as grocery stores, invested in more assets for their shops rather than keeping the money liquid.

So do bank accounts mean better financial security, and do they help people when calamities strike?

Friends, not government, are first responders in crisis

As many as 73% of those interviewed were helped by friends and relatives to recover after cyclones. These cases were rarer in urban than rural areas, possibly because of distances or limited resources to share. This indicates people rely not only on social-safety nets but also on what is most accessible.

Nearly 76% of responders borrowed money either from their friends or from money-lenders to recover from cyclone damage. These loans ranged from Rs. 3000 to Rs. 2 lakh at 2% to 5% monthly interest.

Since the majority of these people had bank accounts, low interest-rate government loans may prove more effective than fixed but insufficient compensation. This would help combat usurious interest rates, while involving the banking system.

Many people working in houses as maids, or shops as casual workers, also borrowed money, clothes, medicines and other food supplies from their employers, although at low or no interest rates. In Khaja Sahi, a slum in Berhampur, Odisha, flattened by the cyclone, a Muslim Trust helped people rebuild lives, another example of an informal safety net.

Many people had some form of life insurance, but none of those we spoke to had any access or knowledge about other types of insurance, especially for work-related assets or housing, except those benefitting from World Bank-funded housing projects. This could be because there are not too many insurance products available in the market, particularly for those living or working in the informal sector.

About 43% of households said they were covered by the National Health Insurance Scheme, the Rashtriya Swasthya Bima Yojana, but only 21% of these said they had used it, since it applies only for major medical treatments and emergencies.

A third of families mentioned health as the primary reason for savings, followed by education (27%), future eventualities (17%) which could include cyclones, rains and any other everyday challenges, children’s marriages (9%) and livelihood-related risks (8%). About 7% of families also mentioned house repairs as a motivation to save.

These are indications that while most people consider health, education and livelihoods as future risks, not as many considered cyclones and disasters.

This could also give an insight to policy makers working on reducing climate-related risks and provides an indication of mistrust of public services, such as health and education. People have taken it upon themselves to save for those, above private affairs, such as marriages and home repairs.

(Jain is a Consultant at the Indian Institute for Human Settlements and works on issues related to disaster risks.)