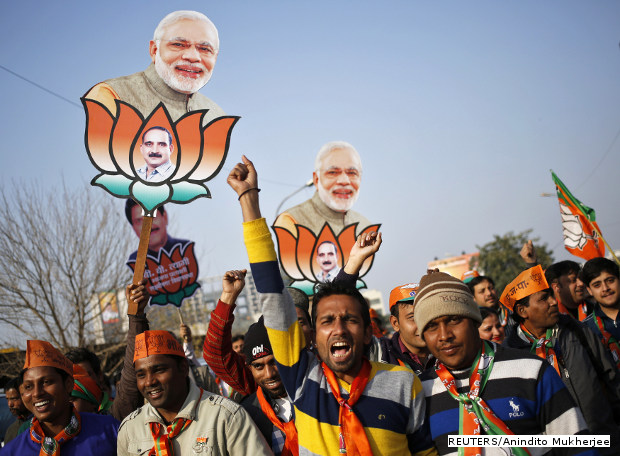 Despite its overwhelming defeat, reduced to three seats in the 2015 Delhi assembly elections, the Bharatiya Janata Party (BJP) has largely maintained the vote share it has had for the last 16 years.

The BJP achieved a vote share of 32.20% this time around, the lowest since 1993 but around the same it's been since 1998, indicating the presence of a loyal voter base.

The wide variation in seats, despite steady voter support is explained by India's first-past-the-post electoral system.

As for the Congress, this has been its worst performance ever, its vote share reduced to just 9.7% and no seats.

The Congress defeated the BJP in the 1998 elections by winning 52 out of 70 seats. This ushered in the rule of Sheila Dikshit as Chief Minister, under whose leadership the Congress subsequently won 47 and 43 seats in 2003 and 2008, respectively.

The 15-year reign finally came to an end in 2013 after strong anti-incumbency sentiment led to the emergence of AAP and re-emergence of BJP as front runners in Delhi’s political arena.

The 2013 election resulted in a hung assembly with BJP winning 31 seats and AAP 28. Congress emerged as king-maker when its outside support allowed AAP leader Kejriwal to form a government and become Chief Minister.

Of the BJP's three seats, one, Mustafabad, was snatched from the Congress. It has retained only two seats from 2013, Shahdara and Vishvasnagar.