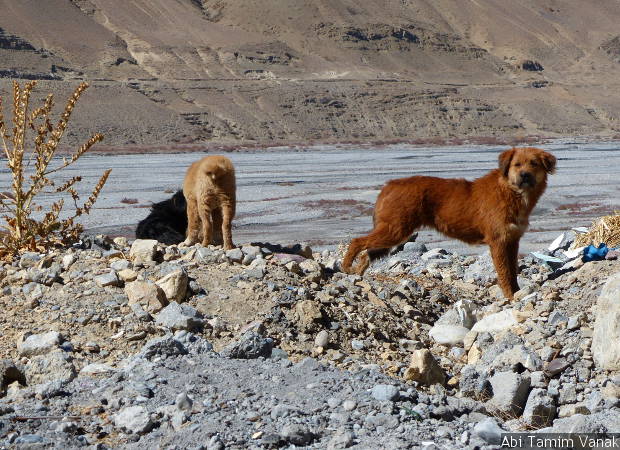 Opening up Upper Spiti, the cold Himalayan desert, to tourists without introducing proper garbage management has led to garbage pile-ups which encourage a higher stray dog population. The town of Kaza and Rangrik, the largest village in Spiti, are the worst-affected, now home to nearly 75% of the dog population in the region.

Feral dog attacks on livestock are causing greater loss than snow leopards and wolves to the pastoral economy of Upper Spiti, the cold Himalayan desert, situated in north-eastern Himachal Pradesh.

In 2013, dogs working in packs of five to 18 were responsible for 63.5% of the livestock kills here while snow leopards and wolves killed far fewer--28.5% and 8% respectively. Chandrima Home--a doctoral student with the Ashoka Trust for Research in Ecology and the Environment and the lead author of this research--lived in Upper Spiti for two years prior to writing the 2017 paper ‘Commensal in Conflict: Livestock Depredation Patterns by Free-ranging Domestic Dogs in the Upper Spiti Landscape, Himachal Pradesh, India’, published in the journal Ambio.

Across India, poor garbage management and insufficient attention to sterilisation drives have resulted in a stray population of around 17 million as per the 2012 Livestock Census, and 59 million as per Free-Ranging Dogs And Wildlife Conservation, a book edited by Matthew E Gompper. As in the rest of India, Upper Spiti too needs a multi-pronged approach to ensure that this canine population growth is curbed and its impact on livestock, wildlife and the local economy is minimised, said Home.

You have estimated Upper Spiti’s 25 villages have a 1:10 stray dog-human population ratio, more than double the 1:22 national average. Why is the region’s problem so acute?

This is the impact of the fast expansion of tourism infrastructure in an environment that is otherwise resource-poor. The influx of humans has led to an increase in garbage which encourages a higher stray dog population. While tourism has benefitted the local people, the lack of a proper garbage disposal system has resulted in a large stable population of dogs in the town of Kaza and in Rangrik, the largest village in Spiti. We estimated that nearly 75% of the dog population in the region lives in and around these two places alone.

To help deal with this problem, the Nature Conservation Foundation has taken steps at the panchayat level in three villages and at the Kee Monastery that sees large congregations during local festivals. Also, Kaza town has made efforts to manage garbage on its own for some years. Overall, garbage management has received a thrust through the Swachh Bharat Abhiyan (Clean India Mission) but guidance would help achieve effective garbage management.

You have estimated that per household in Upper Spiti the loss suffered due to feral dog attacks on livestock is Rs 1,382 ($21.6). How has the community so far responded to this loss?

The local population is Buddhist and bound by the religious tradition of nonviolence. But they are frustrated by the situation. We heard of sporadic incidents of dog deaths but local people also spoke of being consumed by guilt and not wanting to repeat their actions. The community has also tried to tackle the problem by transporting dogs to Manali and Tabo but that just shifts the problem place to another.

Some villagers along the Spiti river valley have opted to change their livestock composition in these last few years. They have reduced their small livestock holding due to increased access to development as well as dog attacks. Many villages have seen a rapid decline in small-bodied livestock between 2010 and 2015.

Is dog population management also a part of the solution?

Certainly, dog population management is essential and needs to be done diligently and sensibly. A systematic process to sterilise dogs was introduced in 2013 when Nature Conservation Foundation, in association with the local government and NGOs, conducted the first sterilisation programme. That was the year I generated the first baseline for dog population estimates in the landscape.

In general, the capture-neuter-release cycle can take over a decade to stabilise the dog population and is a finance-intensive process. Moreover, it does not eliminate the problem of predation by the existing dogs. Sikkim, another Himalayan state in the northeast has become rabies-free, considered a positive outcome of a successful government-run sterilisation programme. Still, Sikkim faces a massive problem of dogs predating on livestock and wildlife.

Strictly enforcing responsible dog ownership rules is also part of the solution, and would involve insisting that owned dogs are sterilised and collared, and imposing fines on owners who allow their dogs to wander into wildlife habitats. Sadly, this is a distant idea.

Also, while we are on the subject of dog population, a Polish study found a strong association between the number of dogs (as opposed to the number of livestock) and depredation. To the contrary, we found a stronger association between livestock abundance and depredation. That means fewer feral dogs might cause economic loss too.

You found that 43% of the livestock kills happened in the presence of herders. Does that mean the area needs a new approach to herding? Could the traditional practice of using dogs to protect small-bodied livestock be a solution?

In autumn, the practice is for herders to accompany medium-bodied livestock (cow, cow-yak hybrids and donkeys) and small-bodied livestock to agricultural fields, and leave them there, unattended, to forage on crop residue. We found that most of the depredations during this season happened when the livestock were unattended.

However, it is questionable whether herding as it is currently being practiced would have made a difference because we found that in spring and summer, most depredations happened while the animals were grazing in the presence of herders. 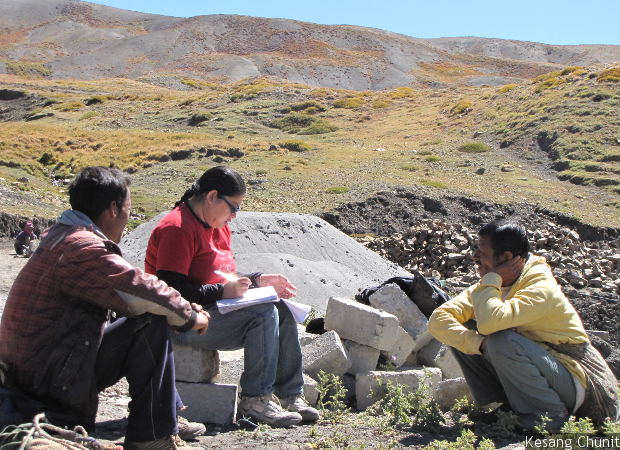 Chandrima Home, a doctoral student with the Ashoka Trust for Research in Ecology and the Environment, lived in Upper Spiti for two years gathering data on changing livestock predation patterns. Interviewing herders revealed the need for more vigilant herding methods, possibly the use of trained sheep dogs and aids such as air guns to keep away feral dogs.

To a certain extent the easy-going approach to herding could also contribute to these patterns of depredation. Of late, Trans-Himalayan communities have been employing migrant labour, especially children, as herders, which may have caused a decline in the vigilance levels in herding. This, in turn, is an outcome of changing socio-economic traditions, of new livelihood opportunities such as growing green peas--a cash crop--and tourism-related jobs.

But there have been occasions when hired adult herders proved to be ineffective against an attack by a pack of, say, 15 dogs in a pasture. The use of aids such as air guns may help improve the quality of herding.

So far, only the Gaddis--the native migratory pastoralists--have been using shepherd dogs to look after their sheep and goat. Their dogs interact with the livestock from a young age and get trained to protect the flock. It is unclear whether the Gaddi have also been experiencing livestock depredation from feral dogs. But certainly their level of herding is more intense as their dogs protect their flock from wild carnivores.

You also talk of nine independent eyewitness reports of blue sheep death caused by dogs. So feral dogs are attacking wildlife too?

We found that feral dogs have killed blue sheep, and researchers and villagers have observed them chasing blue sheep and ibex herds and preying on woolly hare. This high level of conflict could undermine conservation efforts in the region. As I see it, the various stakeholders must intelligently navigate a trade-off in animal welfare.

Should dogs be protected at the cost of livestock and wildlife? The challenge is existing animal welfare rules prevent the removal of dogs from any environment, and mandate only sterilisation as a means of population control.

So far the impact of dogs on livestock and wild animals has not been seen as necessitating immediate action. I, along with five other authors who worked on the paper, propose that the solution must include restricting the entry of free-ranging dogs into wildlife sanctuaries and national parks and removal of unowned stray and semi-feral dogs.