In Backward Regions Of A Backward State, Modi Is The Choice

Ramgarh district (Jharkhand): The way to Malhar Toli was difficult to find, partly because there is no road to this untidy hamlet of around 250.

Lying off the Ramgarh-Bokaro highway, the way to Malhar Toli, in the central Jharkhand district of Ramgarh, is marked simply by an extended gap between two trees. Villagers blunted the steep slope between the highway and the ground alongside by dumping mud to create an access ramp to civilisation.

For now, the road is not a concern for people of Malhar Toli. Two large trees had fallen the night before we visited and destroyed three homes completely, one partially. The ramshackle homes--the walls were made of dried branches and twigs, some covered with old, discarded cloth--had to be rebuilt.

As Jharkhand prepares to vote on April 29 for the first time in the fourth national phase of 2019 general elections, Malhar Toli represents some of India’s starkest developmental issues, affecting its most dispossessed people. The village is inhabited by Dalit Malhars--lowest of Hindu castes--and they are trapped in a cycle of poverty, prejudice and maladministration.

Most villagers have had no access to government schemes, not even ration cards, to buy subsidised food. They cannot apply for any of these because they have no fixed address and are too poor to build homes. Nearby villages periodically evict Malhar Toli’s people because they are semi-nomadic and viewed with suspicion.

In 2018, the absence of the local administration in Malhar Toli led to the death of 40-year-old Chintamani Malhar. A fact-finding mission of local activists found that Malhar had not eaten for days because he was not eligible for government-subsidised foodgrain because he did not have a ration card. He bought foodgrain from the market--at a price at least three times higher--till his money ran out.

At some point, Malhar collapsed outside his house. About half of 14 starvation deaths reported in Jharkhand over a year to July 2018 were linked to administrative failures in delivering subsidised food to the poorest people, IndiaSpend reported in August 2018.

Yet, in a state run by the Bharatiya Janata Party (BJP), the people of Malhar Toli were clear that they wanted the party’s leader, Prime Minister Narendra Modi, re-elected, which meant the local candidate was of little or no consequence.

‘Only Modi can help us’

Jharkhand is India’s sixth-poorest state by per capita income, and compared to the Indian average, it is poorer, has lower literacy, a higher maternal mortality ratio, more open defecation, a larger proportion of stunted children and a smaller proportion of households with access to drinking water and roads.

In 2014, Jharkhand gave the BJP an unprecedented 12 of 14 Lok Sabha seats, with 40.1% of the vote share. In November that year, the BJP, in alliance with the All Jharkhand Students Union (AJSU), won 43 of 81 seats and formed a government in the state.

Five years later, on many counts, Jharkhand is faltering. At least 19 people have died of starvation here, more than any other state, since 2015, according to data from the Right To Food Campaign, an advocacy that monitors the National Food Security Act, 2013. At least 13 were murdered in 16 religion-driven hate crimes, all recorded after the BJP came into power at the Centre and state, according to Hate Crime Watch, a FactChecker database that tracks such crimes. This makes Jharkhand the second deadliest state by hate crimes, after Uttar Pradesh.

None of these facts impair Prime Minister Narendra Modi’s bid for re-election. The reasons are varied--for some, the achievements outweigh the failures; for others, the failures are validation that Modi needs to be voted back--to fix the failures.

“If someone can help us get out of this state, it is only Modi,” said Mandharan Malhar, who earns a livelihood through various odd jobs.

Over 170 km west of Malhar Toli, in Tapkara village in Gumla district, we found similar support for Modi.

Surrounded by mahua trees--honey or butter tree in English--Khatgaon, a village of 800, goes dark at night.

Electricity lines reached the village in 2014, “but the supply is so erratic that we feel lucky if we can light one bulb in each house”, said Shamu Masterji, a teacher at the local government school. Jharkhand is listed on April 23, 2019, in government records as “100% electrified”, a certification granted if no more than 10% of a village is connected to the grid, along with public places, such as schools and health centres.

Khatgaon is a 20-minute drive off National Highway 143, a two-lane road that originates from Gumla and runs all the way south to Barkote in Odisha.

Khatgaon and its neighbouring village of Tapkara are connected by a lynching reported in December 2017. Three Khatgaon villagers--a couple and their daughter--were lynched to death by a mob from the same village.

The family complained that a young Khatgaon man had abducted their daughter, and when he died trying to escape from the police, they were set upon by a mob.

Motilal Kewat, 40, is married to one of the surviving daughters of the family and was pursuing the case and continues to live in Tapkara. In between a narration of the murders and the insecurity he still felt, Kewat declared his support to Modi.

“Not just me, the entire village will vote for him,” he said.

For Kewat, the Modi government’s biggest achievement has been the successes against Maoists. “Under Modi, we feel no fear any more from naxalwaad (naxalism),” said Kewat. “He has crushed it.” 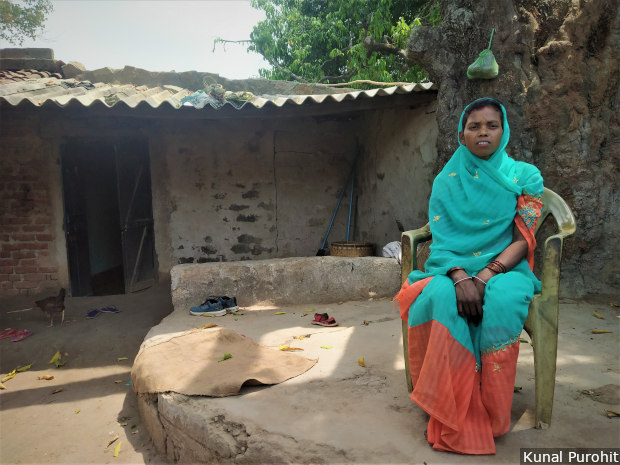 Sanjo Devi’s family--her parents and her sister--were killed by a mob from the same village after tensions over the death of a village youngster who was arrested by the police over a complaint of abduction by the family. Devi and her husband, Motilal, will vote for Prime Minister Narendra Modi because he makes them feel fearless about Maoist violence in Tapkara village, Gumla.

Gumla is one of 90 Indian districts across 11 states identified to be affected by “left-wing extremism”. In February 2019, three Maoists died here during a firefight between them and paramilitary forces.

A construction worker, Kewat remembered the time he had to return home before dusk. “It was very difficult,” he said. “How could people who were into marketing, selling vegetables and running shops, survive?”

Indeed, Maoist violence reduced during Modi’s tenure. Maoist attacks nationwide dropped by 36% from 1,389 between 2010-14 to 894 over the period 2015-19, while deaths--civilians, Maoists and security forces--have reduced to nearly half over the same period, from 2,913 to 1,518, according to the latest available data from the South Asia Terrorism Portal.

Attacks in Kewat’s Gumla district dropped by more than half to 52 over the period 2015-19, from 124 between 2010-14, and deaths--civilians, Maoists and security forces--by more than two-thirds to 30 from 111 over the same period, according to the latest available data from the South Asia Terrorism Portal.

Kewat did not need the data for validation. “My family can also stay here without fear of any violence,” he said. “That’s all one wants.”

Then, he asked a counter question: “Didn’t you come here, peacefully? You didn’t face any violence.”

For Kewat, the government’s social programmes--you can read detailed FactChecker assessments in Modi’s Report Card--are helpful footnotes that reiterate his belief in the Prime Minister.

“All these schemes, from gas cylinders to power supply and roads,” said Kewat. “They are all making life better for us.”

The neighbour who starved

Like Kewat, in Korta village of Garhwa district, 200 km to the north of Tapkara, a group of women expressed a similar analysis of the Modi government’s performance.

Garhwa was ranked 57 in 2018 list of India’s 100 most-backward districts, ranked by Niti Aayog, a government think tank, based on 49 different developmental indicators.

An unsolved problem in the district is a public distribution system without adequate foodgrain. Three people died of starvation over three years to 2019 after being denied rations because of glitches in the system, according to the Right To Food Campaign.

One of the three victims used to live in Korta, 64-year-old Premni Kunwar, and memories of her death in December 2017, remain fresh in the village and mired in controversy.

Villagers told IndiaSpend how Kunwar, an unemployed widow who stayed with her then 13-year-old son, Uttam, had not received her ration for two months and died after not eating for two days. 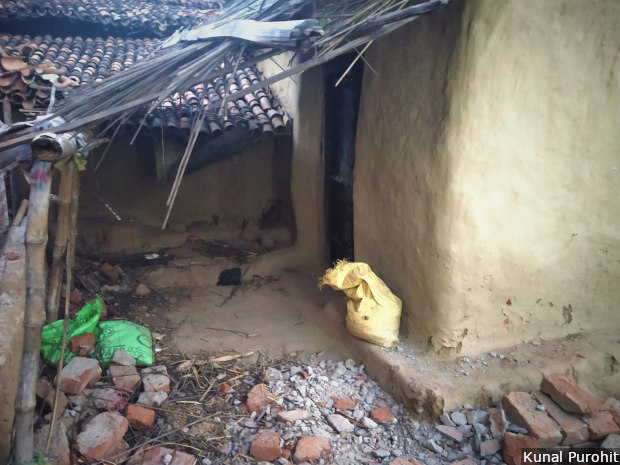 Premni Kunwar’s one-room house, where she lived before she died, lies in a decrepit state. The house has been abandoned and her son, Uttam, now lives with relatives next-door in the same Korta village, Garhwa.

When IndiaSpend spoke to medical experts and social activists in August 2018, we found the typical government response does not take into account two factors involving the links between malnutrition and starvation:

More than 17 months after Kunwar’s death, foodgrain supply to Korta--home to over 2000--was erratic. Many complained that they did not get their rations in time.

Kunwar’s death is not an electoral issue. Her daughter-in-law, Rajkumari Devi, blamed these failures on the lower bureaucracy.

Regular ration or not, most villagers we spoke to in Korta said they were voting for Modi.

“The Modi government has given us a colony,” said Devi’s neighbour, requesting anonymity, as she referred to the houses built in the village under the Pradhan Mantri Awas Yojana-Gramin, the government’s flagship scheme for rural housing. “Will we not vote for it?

Modi, said the neighbour, is “good for the poor” and his government has delivered in a way that no other government has. “Our village road is so much better than earlier,” said Devi. “We now even have toilets.”

“We are getting better ration than before,” the neighbour added, as Uttam, Kunwar’s son walked past.

A five-minute walk away from Korta’s dark, unlit village road is the village chowk. It was minutes past 8 pm and activity was winding down when we visited. A group of men stood alongside a parked car, chatting about the news--the district’s Rashtriya Janata Dal (RJD) leader had joined the BJP.

The men barely talked about the village. Their vote, they said, would also go to Modi but for reasons different from the women.

One man, who called himself only Rajaram, described Modi as “a real leader”. He explained why: “A real leader’s work can be seen on the ground. Modi fought Pakistan. Was it not seen by everyone?” For Rajaram, “nobody else but Modi” could have carried out the air strikes.

“Pakistan always felt that India would never respond to their activities, no matter what they did,” said Rajaram. “Modi changed that.”

Doubts over the effectiveness of the airstrikes did not bother the group of men, and questions evoked responses they were part fact, part fiction.

“There might be no proof of the 250-300 terrorists being killed,” said another man, refusing to give his name since he worked for the government health service. “But, the fact is Modiji managed to free the captured pilot. So many of our pilots from previous wars are still in Pakistani prisons.”

Development does not feature among the top reasons why Korta’s people would vote BJP, but the men agreed that the Modi government’s schemes were benefitting the village.

Back in Mahua Toli, the villagers said they had seen no evidence of the government’s schemes, either on the ground or on paper.

There was a water crisis brewing--the nearby village of Kundaria had refused to let people of Mahua Toli borrow water from their well.

Most residents are trying to get their names on government documents--an Aadhaar card, a ration card, anything. Modiji, they insisted, will change their lives. Till then, they will continue fight his bureaucracy.

(Purohit is an independent journalist, writing on politics, gender, development, migration and the intersections between them. He is an alumnus of the School of Oriental and African Studies, London.)