Data for the number of cultivators is available only up to 2011-12. Figures for later years have been estimated by assuming that people will continue to leave agriculture at the same rate as between 2004-05 and 2011-12. 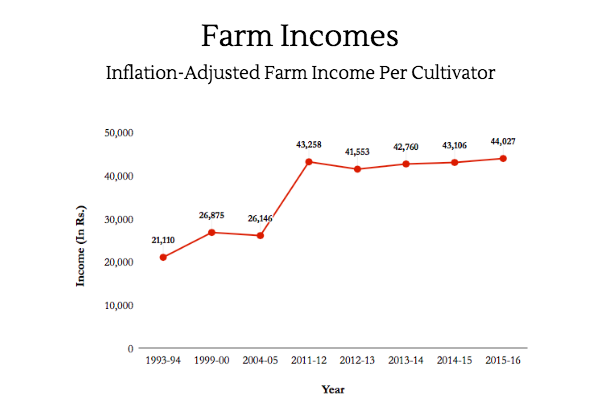 In 2011-12, 64% of the rural workforce was engaged in agriculture, according to the NITI Aayog’s estimates based on data from Central Statistical Office and National Sample Survey Organisation.

In five years to 2015-16, prices received by farmers for their produce are estimated to have risen by 6.88% even as prices they paid for buying goods and services, as measured by the Consumer Price Index for Agricultural Labour, went up by 10.52%, according to the NITI Aayog paper.

In 29 years to 2011-12, farm income per cultivator has remained stagnant around 32-33% of a non-farm worker’s income, according to NITI Aayog’s analysis.