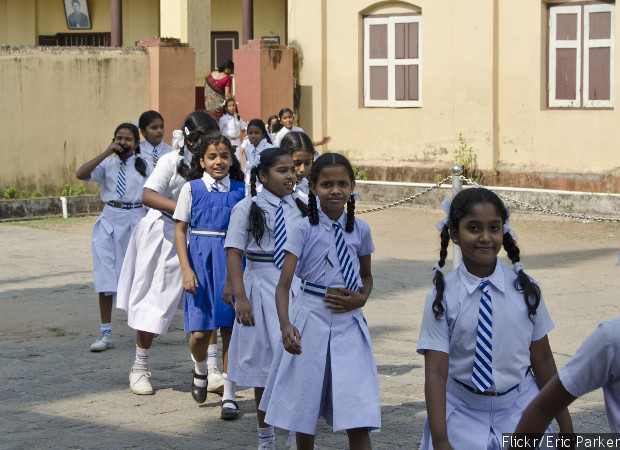 Between 2010-11 and 2015-16, student enrolment in government schools across 20 Indian states fell by 13 million, while private schools acquired 17.5 million new students, according to a new study that offers insights into India's public-school education crisis.

Average enrolment in government schools--where teachers are paid, on average, salaries that are four times those in China--declined from 122 to 108 students per school over five years, while it rose from 202 to 208 in private schools, according to this March 2017 research paper by Geeta Kingdon Gandhi, professor of education and international development at the Institute of Education, London, and president of City Montessori School, a private institution, in Lucknow.

Yet, 65% of all school-going children in 20 states, about 113 million, continue to get their education from government schools, according to District Information System for Education (DISE) and education ministry data.

Why are students opting out of India's government schools, which educate the poorest and most vulnerable students until the age of 14 for free, and migrating to fee-charging private institutions in such large numbers?

The study, which uses DISE data, traced this student migration to the belief among parents that private schools offer better value for money and better teaching than government schools. Multiple evaluations after controlling for students' home backgrounds indicate that "children's learning levels in private schools are no worse than, and in many studies better than, those in government schools", said Gandhi.

Less than one in five elementary school teachers in India are trained, IndiaSpend reported in May 2015. In Delhi, India's capital city and its richest state, by per capita income, half of all government-school teachers are hired on temporary contracts. These teachers are likely to be less motivated and accountable than teachers with full-time jobs, we reported in January 2017.

At the primary level, 58.7% of Indians cite "better environment for learning" as a major factor for opting for private schools, IndiaSpend reported in May 2016.

In Punjab, Gujarat, Maharashtra, Andhra Pradesh and Karnataka, government schools outperformed private schools in reading skills in local languages, once household and parental characteristics were controlled for, according to a state-wise analysis in ASER 2014.

In Kerala and Tamil Nadu, where government schools were better than private schools to start with, learning outcomes improved between 2011 and 2014, once other factors were accounted for.

States with better-functioning government schools have more elite--that is, more expensive--private schools because there is no market here for the 'low-fee' budget private schools that have been sprouting across the country, Gandhi's study said.

This explains why in poorer states, such as Bihar, Madhya Pradesh, Rajasthan, Uttar Pradesh and Orissa, about 70% to 85% of children studying in private unaided schools pay less than Rs 500 per month as school fees. Up to 80% of private schools in India are 'low' fee schools when benchmarked against per capita and daily wagers' incomes, the data show.

Private schools up 35%, government schools by 1%

West Bengal witnessed a 280% rise in tiny schools--more than any other state--followed by Madhya Pradesh (225%) and Jharkhand (131%). However, Bihar bucked the national trend by reporting a 98% decrease in tiny schools.

India's government teachers earn more than not just their counterparts in private schools but also in other countries, Gandhi's analysis shows.

Despite being paid at least four times the salaries of teachers in China (in terms of multiples of their respective per capita incomes), the performance of Indian teachers judged in terms of their students' learning levels, has been poor in the Programme for International Student Assessment (PISA) test in 2009, with India ranking 73rd and China ranking 2nd, among 74 countries.

PISA is a worldwide study by the Organisation for Economic Co-operation and Development (OECD) in member and non-member nations of 15-year-old school pupils' scholastic performance on mathematics, science, and reading.

Up to 80% of India's public expenditure on education is spent on teachers--salaries, training and learning material, according to a six-state report. Teacher salaries in of teachers in Uttar Pradesh are four to five times India's per capita gross domestic product (GDP) and more than 15 times the state's, according to a 2013 analysis by Amartya Sen and Jean Dreze. This is much higher than the salaries paid to teachers in OECD countries and India's neighbours.

"This suggests the need to link future teacher salary increases to the degree of teachers' acceptance of greater accountability, rather than across-the board increases irrespective of performance or accountability," said Gandhi.

The reason private schools get away with paying their teachers less, argued Gandhi, is because of the "bureaucratically-set high 'minimum wage', which may also be influenced by political pulls and pressures and be responsive to lobbying by strong government school teacher unions". Also, she added, the private education sector offers salaries based on market factors of demand and supply--and given that there is a 10.5% graduate unemployment rate in India, jobless graduates are willing to settle for low salaries in private schools.

A common suggestion is increasing India's spending on education. In 2015-16, Indian central government spending on school and higher education was less than other BRICS countries–India spent 3% of its GDP on education, compared to Russia (3.8%), China (4.2%), Brazil (5.2%), and South Africa (6.9%), IndiaSpend reported in January 2017.

However, increased government spending in education is not enough to improve educational outcomes. Between 2006 and 2013, public expenditure on school education increased from 2.2% to 2.68% of the GDP. But India's education policy must be thoroughly revised to put in place better accountability and monitoring mechanisms to exploit the gains of increase in fiscal outlays on education, this January 2017 Mint column argued.

Public private partnership (PPP) model may be the solution, Gandhi argued, combining the best of both worlds--public sector funding and private resources for education.

"Given the tattered state of govt schooling in the country, the first best option--government as producer and also funder of elementary education--is not viable because the reform of the sector is not politically feasible (vested interests, eg teacher unions, will oppose any efficiency and accountability-raising measures)," Gandhi told IndiaSpend in an email interview. "Therefore, perhaps, a well-designed PPP (model) would be the best. But the devil is in the design of the PPP--there are some good models around the world."

Before choosing any particular form of educational PPP, India must study these different designs and their relevance/applicability/adaptability, and must also pilot test the chosen models before scaling up any novel intervention, Gandhi suggested in her paper.

NOTE:The story has been updated to reflect researcher Geeta Kingdon Gandhi's affiliation with a private school in Lucknow.