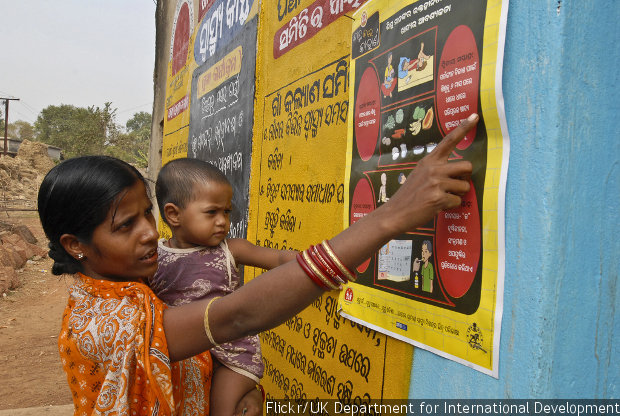 It is now 42 years since the integrated child development scheme (ICDS)--the world's largest integrated early childhood programme--was launched, and its successes and failures mirror India's inability to improve health services to match the growth in its economy, which grew 21 times--or 2,100%--between 1975 and 2016.

The scheme, launched on October 2, 1975, was a response to the challenge of providing pre-school and non-formal education and to break the cycle of malnutrition, morbidity, reduced learning capacity and mortality.

India’s ICDS has reached 99.3 million beneficiaries and has 1.4 million anganwadi centres (AWCs, or courtyard shelters) across the country, as of December 2016, the women and child development ministry said, as part of a March 2017 answer to the Lok Sabha (lower house of Parliament).

Also, India is home to more than 40 million stunted (low height-for-age) children under the age of five--more than any country in the world, and in spite of a 200% increase in spending on child health between 2005-06 and 2014-15.

Source: Ministry of Women and Child Development, Union Budget 2017-18Note: All figures are revised estimates, except for FY 2017-18, which are budget estimates. Figures for FY 2016-17 only reflect only ICDS Core.

Yet, “…more allocations need to be made both at the Union and state level, considering the severity of malnutrition in India. Also, decreasing the work load of the overburdened anganwadi workers and improving their capacity to support the various services under the programme calls for an enhanced budget allocation,” the budget analysis by Centre for Governance and Budget Accountability noted.

The ICDS is aimed at the holistic development of children under six and providing nutritional and health support to pregnant and lactating mothers.

From not actually covering all eligible children to having infrastructural gaps, many deficiencies of the ICDS have been documented by various reports over the years.

Around 50% of the total eligible children were found to be enrolled at anganwadi centres and the effective coverage as per norms is only 41% of those registered for the ICDS benefits, according to this 2011 evaluation of ICDS by the erstwhile Planning Commission across 100 districts in 35 states.

“Anganwadi workers are overburdened, underpaid and mostly unskilled, which affects the implementation of the scheme,” the report noted.

Sixty percent of the AWCs did not have their own building, and 25% were functioning in semi-pucca/kuccha buildings or partially open space, a 2012 audit on ICDS by the comptroller and auditor general (CAG) of India--the government’s auditor--found.

Fifty two percent of AWCs did not have a toilet and 32% did not have drinking water facilities--which led to sanitation and hygiene problems--the CAG’s report noted.

Besides the infrastructure issues, the auditors found 33% to 47% of children were not weighed from 2006 to 2011, and the data on nutritional status of children had discrepancies.

The auditors found that the funds were not released for critical aspects of the scheme and a large portion of the funds released were for salaries; they also noted that ‘the follow-up action on the internal monitoring and evaluation by the ministry was not adequate’.

Nearly 60% of AWCs were still awaiting their flexi funds of Rs 1,000 per annum for meeting emergency costs such as referral arrangements, shortage of medicines and utensils, a 2016 survey across 300 AWCs, spread across 10 districts in five states, by Accountability Initiative, a public research initiative at Centre for Policy Research, Delhi, found. Fourteen percent AWCs reported a shortage of grains and 41% reported a delay in getting grains or money to buy grains the survey found.

Note: This story was first published here on ndtv.com.