As many opposition members of Parliament (MPs) protested, Sumitra Mahajan, speaker of the Lok Sabha--controlled by the Bharatiya Janata Party (BJP)--used a parliamentary procedure called the “guillotine”, which empowers her to pass grants without discussion.

Among the demands passed:

The bills were the contentious Finance Bill, 2018, and the Appropriation Bill, 2018.

No bills had passed over the last eight days, with the Opposition protesting the Rs 11,000-crore Punjab National Bank scam, special compensation packages for Andhra Pradesh and Telangana, and defacement of the Periyar statue in Tamil Nadu.

On Wednesday afternoon at 12.35pm, speaker Sumitra Mahajan applied the guillotine to pass the budget 2018 in time for the new financial year, which starts on April 1, 2018. At the start of the week, the BJP had issued a three-day whip to its members to be present in the House. The BJP-led National Democratic Alliance government holds an absolute majority in the Lok Sabha.

How the speaker applied the guillotine

The speaker of the Lok Sabha can apply the guillotine on the last day of the period prescribed for discussions on the demands for grants. In so doing, all outstanding demands are put to vote at a time specified in advance. The aim: To conclude discussions on financial proposals within the time specified. Once the guillotine is invoked, all outstanding demands for grants must be voted on by the House without discussion.

After all the demands for grants were passed, speaker Mahajan passed two money bills--the Appropriation Bill, 2018 and the controversial Finance Bill 2018--with only a voice vote.

A money bill can be introduced, amended and voted on only in the Lok Sabha. It can then be referred to the Rajya Sabha (upper house of Parliament), which cannot vote on or hold back such legislation for more than 14 days.

A significant number of demand for grants are passed every year under the guillotine without discussion as the chart below shows.

It is rare to see all grants passed without discussion. Since 2000, a 100% guillotine was previously recorded in 2013 under the United Progressive Alliance and in 2004 under the previous term of the NDA..

However, with the railways budget now merged with the general union budget, the demand for grants guillotined without discussion is significantly higher than previously.

Since funding demands from six ministries were due to be discussed today, Parliament was denied the chance to debate a significant proportion of grants, equal to 28% of the budget, said PRS Legislative Research, a think tank. These include funding demands from the allocations to the ministries of railways, agriculture, youth affairs, road transport and highways and social justice and welfare. 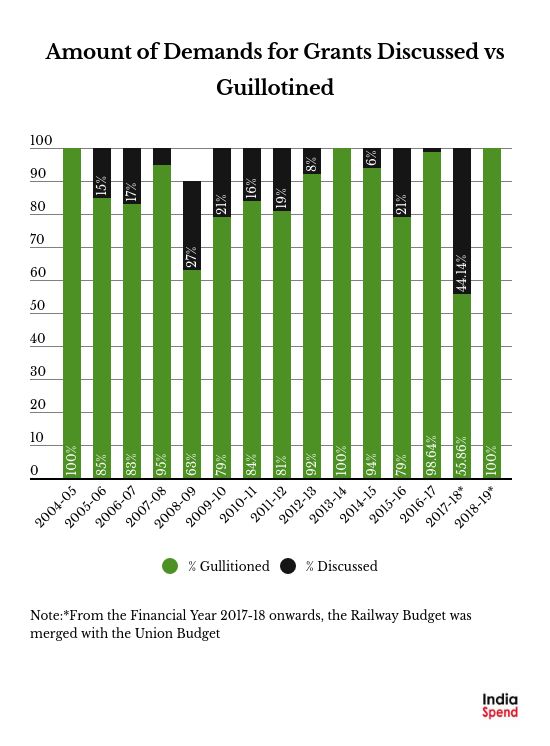 Why these ministries needed scrutiny

Discussion on funding to these ministries is especially significant:In 2017, lives lost in train derailments across India were the highest in a decade, agricultural distress roiled several states that witnessed farmers protests, while the Skill India programme to get youth job ready controversially rescaled its targets, as IndiaSpend reported (here, here and here.)

Other budgetary issues flagged for discussion:

Indeed, allocation for reproductive and child health within the NHM has been cut by 30%, as IndiaSpend reported on February 2, 2018, while details of the newly announced National Health Protection Scheme, cited as the world’s largest government-funded healthcare programme, remain unclear.

The budget also reports a 9% decline in spending for affordable housing for the rural poor under the Pradhan Mantri Awas Yojana (Mission Housing For All) by 2022, and no increase in allocations to the Mahatma Gandhi National Rural Employment Guarantee Scheme, the world’s largest make-work programme, as we reported.

Under the guillotine, Parliament passed the Finance Bill 2018, which, as we said, includes 218 amendments, without discussion and moved it to the Rajya Sabha where it cannot be voted upon on held back for more than 14 days.

Some of the important amendments passed without discussion include:

Foreign funding to political parties: Among these 218 changes in the Finance Bill lies a contentious amendment to the repealed Foreign Contribution Regulation Act (2010) or FCRA. The amendment substitutes “26th September, 2010” in the FCRA Act with “5th August 1976”. In so doing it legalises all foreign funding to political parties over 42 years and protects the parties in question from judicial inquiry.

The retrospective move is likely to benefit the BJP and the Congress, both held guilty by the Delhi High Court for receiving foreign funds from two subsidiaries of Vedanta, a U.K.-based company, the Hindu reported on February 2, 2018.

Last year too, the NDA government passed the Finance Bill, 2017 (now an Act) under the guillotine without discussion and without interference from the Rajya Sabha through the money bill route. This Act introduced electoral bonds (scheduled to launch on April 1, 2018), to bring “substantial improvement in transparency over the present [electoral] system of no-transparency”, as the government said.

However that may not be the case as Factchecker reported on January 17, 2018.

Through electoral bonds, donors and political parties are guaranteed anonymity; donors can donate no more than Rs 2,000 in cash but can make repeated donations of that amount; loss-making companies are now allowed to make donations, which could spur the creation of shell companies; and parties do not need to declare donations or reveal who made them.

Salaries: With effect from April 1, 2018, MPs’ salaries, daily allowances and pensions have now been cumulatively increased by Rs 55,000 to reach Rs 127,000 per month.

The salaries of the president and state governors salaries have also been hiked by a cumulative Rs 350,000 and Rs 240,000, respectively, with arrears from January 2016.

Long Term Capital gains tax: Key among 21 amendments related taxation and investment, the government has passed without debate the re-introduction of a long-term capital gains tax in the 2018 Finance Bill. Any listed equities valued over Rs 1 lakh bought after January 31, 2018, will now be subjected to a capital gains tax of 10%, according to the amendment.

After the demand for grants were approved, Parliament also passed the Appropriation Bill, 2018, through voice vote. This Bill is passed every year after budgetary estimates are approved. It authorises the government to make payments and take out certain approved amounts from the Consolidated Fund of India, which is the total of government revenues. Once the Bill receives assent from the president, it becomes an Act. The Appropriation Bill passed on March 14, 2018, let's the government withdraw Rs 80,000 crore from the Rs 57 lakh crore that constitutes the Consolidated Fund of India.

(Mohan, an MA from Mumbai University and Sanghera, a BA (Hons) from King’s College London, are interns with IndiaSpend)