In 3 Years, Cancer Rate Rises Up To 4 Times Faster Than National Rate In Small Provinces 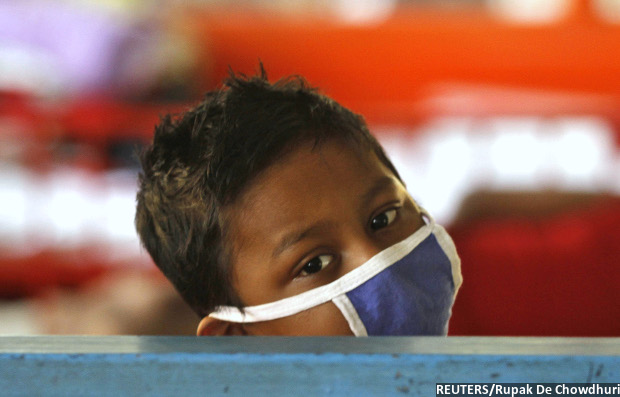 A young cancer patient rests in the children's ward at the Cancer Centre Welfare Home and Research Institute in Kolkata.

In three years to 2016, the cancer rate (cases per 100,000 people) rose four times faster than the national rate in some of India’s smallest provinces, two of which are also among India’s richest by per capita income, according to an IndiaSpend analysis of government data submitted to parliament.

While the union territory Daman & Diu reported the highest increase of 41 points in number of cancer cases per 100,000 people over three years to 2016, the number rose by 10 points for the country, shows our analysis of a reply given to the Rajya Sabha (upper house of parliament) by minister of health and family welfare Jagat Prakash Nadda on August 1, 2017.

The union territories of Dadra & Nagar Haveli (22 points), Lakshadweep (18.6 points) and Puducherry (13.5 points) and the state of Kerala (13 points) reported the next highest increases over this period, our analysis shows.

Puducherry and Kerala had the fifth and eighth highest median per capita income between 2013-14 and 2015-16, according to Reserve Bank of India data.

Cancer is now known to strike at any age, as cells grow out of control due to multiple reasons: A flaw in genes, toxins in the air and in food, or consumption of tobacco or excess alcohol.

At 181 per 100,000 people, Daman & Diu’s cancer rate was highest in the country and 62 points more than the national rate of 119. In the three years, India reported 9% more cancer cases, according to the Rajya Sabha reply.

A million Indians are diagnosed with cancer every year, and 680,000 die from a disease once regarded as an affliction of the Western world. India’s cancer burden is now expected to rise 70% over the next 18 years, from nearly 1 million new cases in 2012 to 1.7 million by 2035 according to GLOBOCAN, an international initiative on cancer data.

Why 68% of Indian cancer patients die, compared to 33% in the US

Although the incidence of cancer in India is more than half the world average–119 per 100,000 compared to 182 per 100,000–and a little less than half of the incidence in developed countries (268 per 100,000), cancer care is scarce, as IndiaSpend reported in a three-part series on India’s struggle to provide cancer care.

These may be underestimations because there were 1.45 million new cases of cancer and 736,000 deaths in India in 2016, expected to increase to 1.73 million in 2030, with 880,000 deaths by 2020, according to data from the National Cancer Registry Programme of the Indian Council of Medical Research.

That is why 80% of India’s cancer cases come to medical attention at an advanced stage, one reason why 68% of patients with cancer die of the disease in India, compared to 33% in the US. India also has 0.98 oncologists per million population, compared to 15.39 in China, 25.63 in Philippines and 1.14 in Iran.