In 2018, Floods Damaged Farms The Size Of Mizoram

Mumbai: Nearly 4.9 million hectares of land across India were affected by floods in 2018, roughly the size of India’s largest district Kutch, the latest government data submitted in parliament show.

That same year, 1,808 people lost their lives in floods.

The crop loss was estimated at 2.07 million ha, roughly the size of the entire state of Mizoram. The value of the crops lost was pegged at Rs 3,097.3 crore. Cattle rearers lost 53,867 cattle in the floods with the overall damage to homes, crops and public property, among others, estimated to be about Rs 95,736 crore, 39% more than the Centre’s allocation for the health sector in the 2020-21 budget.

Data show that incidents of heavy rainfall are increasing, and experts say India must prepare better.

Rainfall of 100-150 mm or more in a day is classified as a heavy-to-extreme rainfall event. Whether this translates into a flood depends on the duration of the rainfall and the area covered. Land topography, soil moisture conditions and river catchment size also play a role. “For example, heavy rainfall events over hill slopes with saturated soil can trigger landslides and result in floods,” said Roxy Mathew Koll, climate scientist at the Indian Institute of Tropical Meteorology (IITM), Pune. “The scenario would be different in cities where canals and drainages can overflow and (there is a) lack of floodplains or mangroves to absorb these heavy rains resulting in flood conditions,” said Koll.

Climate breakdown is set to make extreme rainfall events and dry spells more common as well as more intense, according to the emerging evidence.

A comparison with the previous two years’ data for India shows that although the spatial spread of floods has decreased over the years, the estimated damages have increased in terms of the number of people affected, lives lost and the overall loss of crops and property.

India has invested in disaster preparedness, focusing on early warning and evacuation. This is the reason that despite the increase in extreme events we have been able to avert significantly high loss of lives compared to earlier years, according to Ulka Kelkar, director of climate programme at World Resources Institute (WRI) - India.

“Although the government’s reply in parliament stopped short of drawing a causal link between climate change and floods, there is evidence that floods are on the rise in India due to rising incidents of heavy rainfall, coupled with faulty urban and rural planning, as monsoon becomes erratic,” said Abinash Mohanty, programme lead in the risks and adaptation team at Council on Energy, Environment and Water (CEEW). “Emerging evidence links the changes in monsoon to this climate change emergency that poses a risk to both loss of lives and property even as India’s disaster preparedness remains limited.”

Loss of property and disruption of livelihoods remain big concerns as climate change is set to increase both the frequency and magnitude of disasters. “We need to integrate climate risks in every aspect of development planning, infrastructure investments, and social safety nets,” said Kelkar.

According to CEEW’s analysis of data from the past 40 years (1980-2019), the number of flood events has risen threefold (figure below enumerates the trends). A majority of the states have a flood contingency plan, but what has triggered the panic button is the uncertainties that are associated with the compounding of the extreme flood events with other events such as simultaneous flood-drought, storm surge-floods, among others, said Mohanty. The occurrence of these extreme events together is not integrated into any planning or actions, he said, adding that Odisha and Bihar are recognised as having some of the best flood contingency plans. 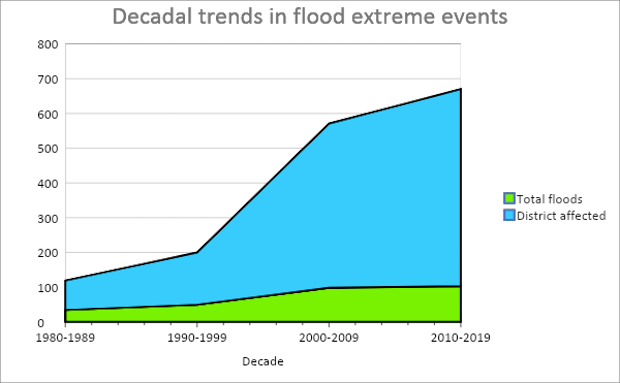 Extreme rainfall events and floods claimed 1,685 lives across 14 states in India during the four-month south-west monsoon (June-September 2019)--a rate of nearly 14 deaths per day, on average, we reported earlier. In the coming decades, climate projections predict the situation is likely to worsen, Mohanty said. Many factors shape a flood event, of which weather events (rainfall, storm surge, snowmelt, among others) contribute significantly. These weather events, when compounded with anthropocentric land use and land cover stress, result in severe catastrophes. Research-based evidence has already established a direct correlation between climate change and the increase in flood events.

Freak rain events are related to flashfloods. For example, Kerala faced a quiescent monsoon in 2019, but witnessed the most devastating floods on record the same year due to incessant rain for two weeks. According to an analysis based on European Weather Forecasting re-analysis data that uses recent forecast models to reanalyse past archived observations, rainfall trends are quite abrupt, which cause both economic and developmental disruptions. The number of rainfall days is decreasing, but day-wise intense rainfall (12-15 cm/ day) events are increasing.

“At the same time, according to the India Meteorological Department, there has been an increase in the rainfall deficient years in the last decade; even as the incessant rainfall pattern has become more evident,” said Mohanty of (CEEW).

When cities and homes are built over hills, lakes and streams, and forests and wetlands that act as buffers or sponges are lost, extreme rainfall events can lead to floods, Kelkar of WRI India said. In Uttarakhand, cloudburst led to flashfloods. In Kerala, dam management has led to landslides. In Mumbai, heavy rain and high tides have overwhelmed stormwater drains, he said.