In 2016, One In Four Rape Cases Ended In Conviction 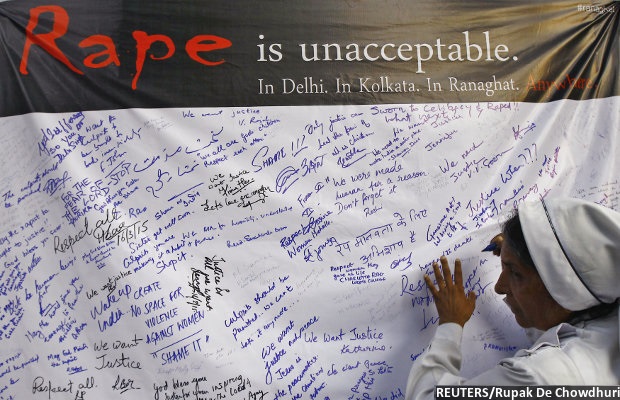 In 2016, one in four rape cases in India ended in conviction--lowest since 2012--according to national crime data.

India’s conviction rate for rape, at 25.5%, remains low compared to all cognisable crimes--those that do not require a magistrate’s permission to investigate--under the Indian Penal Code (46.9% in 2015).

As a special Central Bureau of Investigation (CBI) court in Panchkula, Haryana, sentenced Gurmeet Ram Rahim Singh to 20 years in jail 15 years after the case was registered, we take a look at India’s record in disposing cases of rape.

As many as 278,886 rape cases have been reported in India over the last 10 years under Section 376 of the Indian Penal Code.

“Declining conviction rate in rape cases ordinarily means lesser number of registered cases could be proved in court and this gives rise to the suspicion that maybe false cases are also being registered,” Anant Kumar Asthana, a Delhi-based activist and lawyer had told IndiaSpend, in this report on July 8, 2017.

“But it could also mean that police is not able to do good investigations or that victims are not getting quality legal representation during trial. Whatever may be the reason, declining conviction causes concern and must be examined for possible reasons,” Asthana had said.

“Stringent implementation of laws and strict policing will help, but the real change will come when abusers and rapists are consistently convicted for their crimes, survivors are not doubted, judged or shamed,” said Preethi Pinto, Program Coordinator on Prevention of Violence against Women and Children at Mumbai-based SNEHA (Society for Nutrition, Education and Health Action), IndiaSpend reported on July 8, 2017.

Singh, the leader of socio-spiritual organisation Dera Sacha Sauda, was convicted of rape in a 2002 case by the CBI special trial court in Panchkula, Haryana, on August 25, 2017. The verdict came after nearly 200 hearings spread over 10 years and numerous stay orders of higher courts, according to this Business Standard report dated August 25, 2017.

Singh’s conviction sparked widespread violence and arson in Haryana and adjoining areas, killing over 30 people and leaving more than 250 injured.

The Punjab and Haryana High Court pulled up the Haryana government for not imposing prohibitory orders under Section 144 properly and preventing the huge gathering of Dera followers in Panchkula.

The Supreme Court on August 28, 2017, questioned the Gujarat government for the slow trial in the case of rape against Asaram Bapu, a self-styled godman, who has been in a Rajasthan jail since August 31, 2013, pending trial for the alleged rape of a 16-year-old schoolgirl in August 2013.

Asaram Bapu rape case in Gujarat: SC also asked the Gujarat Govt as to why the victim in the particular case has not been examined till now

The conviction rate for rape in Gujarat, where Asaram’s trial is underway, was 10.1% in 2015 against the national average of 29.4% in the same year.

Update: The story has been updated to reflect that Singh was sentenced to 10 years in jail in each case, to be served consecutively and not concurrently.