Muslim Population Growth At 20-Year Low
Medical Termination of Pregnancy Act Failing Women Who Need It The...
Birth Certificates Are Citizenship Proof, Govt Says. But 38% Under-5...
India Will Have Largest Population But Data Show The Growth Is

A view of a house that was destroyed in Atali village of Haryana's Ballabgarh where communal riots broke in June 2015. The home ministry's records of communal incidents/riots do not match the figures released by the National Crime Records Bureau for 2016--the third year in a row.

In 2016, 869 cases relating to communal riots were recorded by the National Crime Records Bureau (NCRB) compared to 703 communal incidents by the ministry of home affairs, Factly, a data-journalism portal, reported on December 2, 2017.

NCRB reported almost twice the number of incidents compared to the home ministry for 2014. The gap closed in 2015 and widened again in 2016.

If the number of communal riots cases and cases of promoting enmity between groups from the NCRB report are added, then the difference between the NCRB data & MHA data widens further.

NCRB, which is part of the home ministry, is tasked with collection and dissemination of a secure national database on crimes, criminals and law-enforcement agencies. Every year, NCRB collects data from the police departments at the state level, and compiles them into a Crime in India report. The report has detailed information on various crimes. 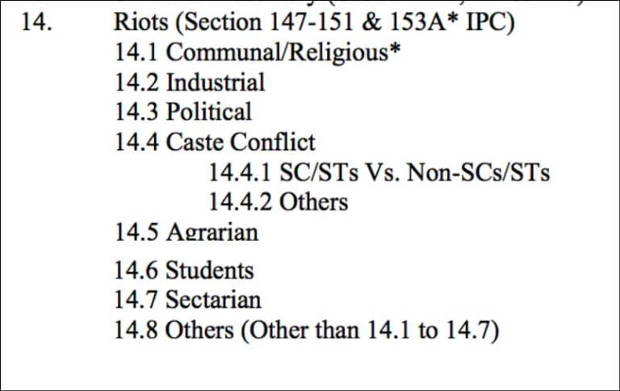 There is also separate section to collect data on offences that promote enmity between different groups as defined under Sections 153A & 153B of the IPC.

Before 2014, all the data related to riots used to be collected under one head called ‘riots’. From 2014, the data on riots is categorised into sub-heads, namely communal riots, industrial riots and riots for political reasons. There is also a separate section on ‘offences promoting enmity between different groups’.

NCRB gets all the data from state police departments, and these data are based on the sections mentioned in the First Information Report (FIR) of the cases filed.

NCRB also follows the ‘Principal Offence Rule’ for counting of crime. So, among many offences registered in a single case, only the most heinous crime (maximum punishment) will be considered as counting unit, thereby representing one case. Sometimes, it is also possible that multiple cases will be filed for a single incident.

Why government’s explanation does not add up

The government, on multiple occasions, maintained that the NCRB collects police-registered communal riots cases (FIRs) from states, and there could be multiple FIRs in a single incident of communal violence. So, NCRB data vary from the ministry data, which are based on communal incidents and not FIRs.

As per the government’s explanation, NCRB numbers should be equal to or higher than the ministry’s data for every state.

For 2014, in states such as Haryana, Jharkhand, Tamil Nadu and West Bengal, the NCRB numbers were significantly higher than the ones reported by the home ministry. But in states like Karnataka, Madhya Pradesh, Rajasthan, Gujarat & Uttar Pradesh, the home ministry numbers were higher than those reported by NCRB--suggesting FIRs may not have been filed in some incidents.

In the case of Uttar Pradesh in 2014, the NCRB reported 51 communal riots cases and 26 cases of promoting enmity between groups. Together, they add up to 77 cases in NCRB records, while the home ministry reported 133 incidents.

(Dubbudu has been working on issues related to the Right to Information for a decade. He is a data/information enthusiast and is passionate about governance/policy issues. Factly.in is dedicated to making public data meaningful.)